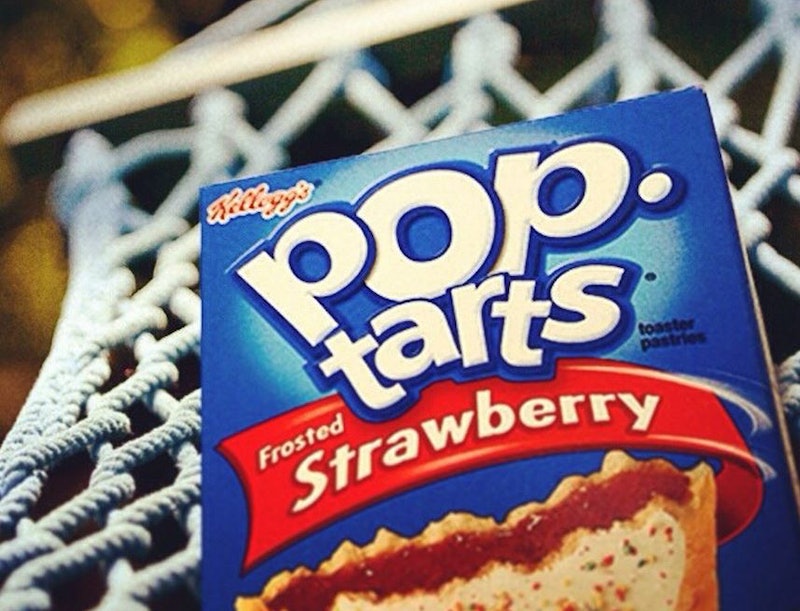 There are few processed food items as fascinating as breakfast cereals aimed at children — and in the '90s, the whole kid's cereal industry took a distinctly wacky turn. No longer were colorful mascots and prizes in the box enough to entice America's youths; we needed to think outside the (cereal) box in order to draw in that coveted demographic. Innovations subseqently abounded, many of which involved turning other favorite treats into something deemed acceptable for breakfast — and one of the most creative of these options was Pop-Tarts Crunch. But whatever happened to Pop-Tarts Crunch cereal? It had one brief and shining moment in the mid-'90s before vanishing forever. Where did it go? Will it ever return? I made an attempt to find out the answers to these questions — here are the fruits of my labor. It's Throwback Thursday after all, right?

Before we talk about Pop-Tarts Crunch, we should probably talk a little bit about Pop-Tarts themselves. First introduced by Kellogg's in 1964, they've been around for a lot longer than most people probably think. According to cultural historian Jack Mingo, who wrote extensively about Pop-Tarts on Whole Pop, the pastries arose out of post-World War II America and the desire to develop breakfast foods that A) weren't cereal, and B) had a stupidly long shelf life. Post apparently came up with their own version first, a product called “Country Squares” that flopped pretty dramatically; but Kellogg's? They hit pay dirt, with the name “Pop-Tart” — inspired by Andy Warhol's pop art (get it?) — largely being why. The original offerings came in four flavors, most of which are still around today: Strawberry, blueberry, brown sugar cinnamon, and apple currant (guess which one got jettisoned later on?). The frosted version came along a few years later in 1967, and, well… let's just say it was the beginning of a beautiful friendship between humanity and breakfast pastries.

Also, this GIF of how a Pop-Tart is made just blew my mind:

Kellogg's has periodically released wacky new spins on the Pop-Tart over the years, although none of them have had quite the same staying power as the original pastries: Pop-Tarts Pastry Swirls, which looked kind of like danishes, came along in the '90s before being discontinued in the early 2000s; Pop-Tarts Snak-Stix, which launched in 2002, only to be swept off shelves in 2003; Pop-Tarts Mini Crisps, bite-sized, unfilled crunchy things which appeared on the scene in 2011 before production dropped from four flavors to two shortly thereafter; and so on and so forth. They've all been pretty gimmicky… but none of them were as quite as spectacularly so as Pop-Tarts Crunch. It looked like this:

Introduced in September of 1994 according to Mr. Breakfast, Pop-Tarts Crunch had the same allure as French Toast Crunch (which, incidentally, hit shelves at roughly the same time): The cereal pieces looked like versions of real-life foods that had been hit by Wayne Szalinski's shrink ray. The self-proclaimed “Pop-Tarts for your spoon” came in two flavors, Strawberry and Brown Sugar Cinnamon — arguably two of the most beloved Pop-Tarts flavors of all time — with each crunchy cereal piece hiding a core of delicious Pop-Tarts-esque filling. A cereal that consisted of itty-bitty Pop-Tarts meant that we could now serve the breakfast of champions to our favorite toys… and even if we were considered “too old” to play with dolls and action figures? It didn't really matter. Tiny food is inherently delightful and adorable, so of course it would inspire a hit song, right?

...OK, so maybe that wasn't exactly a hit song. It was, however, a perfect example of the quintessential '90s commercial, which is matched only by its counterpart:

Alas, though, Pop-Tarts Crunch never caught on. Why? Nobody really knows. I can't imagine that kids didn't want to eat it; on the contrary, it's one of many discontinued foods its followers have found notable enough to campaign for its return. I'm pretty sure it had more to do with what those kids' parents wanted, because let's face it: When it comes to healthy breakfasts, pastries and pastry-inspired foods are very rarely your best options. In any event, it had vanished in 1995, leaving tiny Pop-Tarts Crunch-shaped holes in all of our cereal-loving lives. According to Kellogg's, there aren't any plans to bring it back in the works, either — although I suppose a miracle might always occur. Stranger things have happened, right?

Can you get a hold of Pop-Tarts Crunch today? Not easily — all I could find on eBay was a Pop-Tarts Crunch-shaped fridge magnet, and even if you did find a box, I doubt you'd want to eat a bowl of 20-year-old cereal, anyway. But there are a few other options available that approximate the experience of eating Pop-Tarts Crunch, even if the match isn't exact: Kellogg's Krave cereal, for example, is similar in concept (rectangular pieces of cereal filled with something delicious — chocolate, in this case) — and did I mention that we have a recipe for mini-Pop-Tarts cereal in our archives here at Bustle? Because we do. Is it a little labor intensive? Well, yes — but I would argue that the pay-off of being able to eat a customized version of a lost childhood classic is worth it. Or at least, it's worth it for the kitchen-inclined.

So there you have it: A brief history of the rise and fall of Pop-Tarts Crunch cereal. Now if you'll excuse me, I've got some work to do on that super secret shrink ray I'm working on.

More like this
Starbucks’ Chocolate Cream Cold Brew Tastes Like This Retro Candy
By Emma Garza
Remember These Ancient Pieces Of '90s Tech?
By Lucia Peters and Emma Carey
11 Trends From The ‘90s That Made You Feel So Cool
By Julie Sprankles
Meet The Spice Company Founder Who Sees Chai As A Metaphor
By Madhuri Sathish-Van Atta
Get Even More From Bustle — Sign Up For The Newsletter