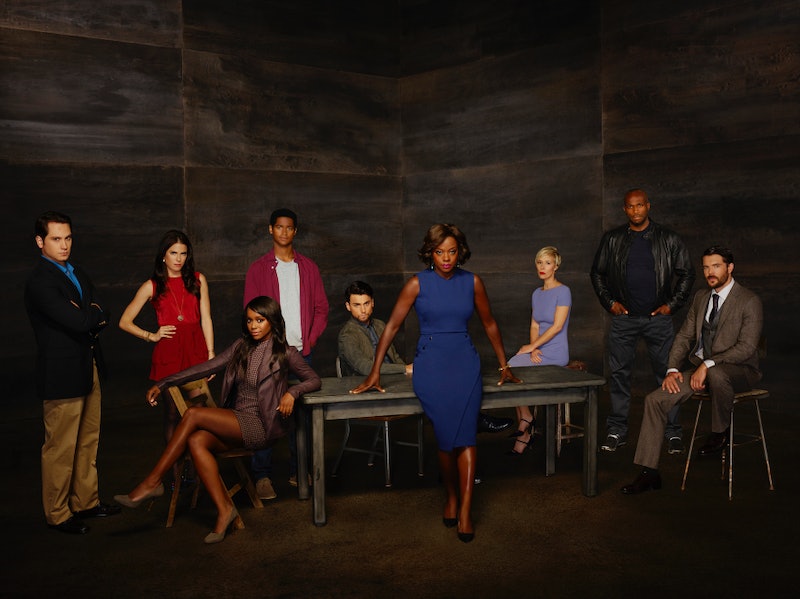 We may now know the identity of Rebecca's killer, but it didn't take long for How To Get Away With Murder to introduce a new mystery that's already proven to be the most suspenseful plot twist yet. (Which is really saying something on this show.) In the Season 2 premiere, a flash forward two months into the future saw Annalise suffering from a potential fatal gunshot wound in the mansion of her two new clients, while a suspicious-looking Wes is found running away from the scene. And while we'll inevitably learn just how all of this came to pass, the most pressing question on my mind is: Who shot Annalise?

It's no secret that this law professor has made many, many, many different enemies throughout the years, so our list of suspects is rather extensive at this point. Not to mention the fact that pretty much everyone on this show is more than capable of committing unlawful deeds — even doe-eyed Wes. So as a way to help us narrow down who exactly pulled that trigger, I've rounded up some of the most likely candidates who would have both the ability and motive for committing such a heinous crime. Because nobody shoots Annalise Keating and gets away with it… right?

First of all, he was spotted fleeing from the very place the gunshots were fired. Second of all, he's been known to get angry with Annalise in the past and would be positively furious to find out she's been keeping Rebecca's death from him. So yeah, the incentive is there. But then again, isn't it a little bit too obvious? This show is basically one big murder puzzle, so would they really give us the pivotal piece to solving the whole thing in the very first episode? Wes being there could just be a red herring and nothing more.

We know this guy is capable of murder, given that he was the one who killed Lila in Season 1. However, we still know very little about Frank in general. Like why did he owe Sam a favor in the first place? Clearly, he's not entirely loyal to Annalise, so perhaps something happens that makes Frank do what he does best… look out for himself. Maybe Annalise became a liability for him.

You have to admit it would be very ironic if Nate was accused of murder for a crime didn't commit, only to then attempt actual murder later on and get away with it. Injustice: 1. Legal system: 0.

Then, of course, there's always the chance that Annalise ends up hurting her former lover yet again, which sends her spiraling into a murderous rampage. After all, there's no wrath like a woman scorned.

Granted, just because the incident happened in their house doesn't automatically make them guilty, but it certainly doesn't make them look innocent either, especially since they're currently the main suspects in their own parents' murders.

Whoever's on the end of this phone number probably won't be too happy to find out what actually happened to Rebecca. And let's face it, it's only a matter of time until that secret gets out. So either he/she thought Annalise played a role in their friend's demise or are just plain furious that she let the actual killer (aka Bonnie) get away with it. Maybe this mysterious character thought it was time for Annalise to be punished… permanently.

For a refresher of Season 1, watch Bustle's drunk recap below: