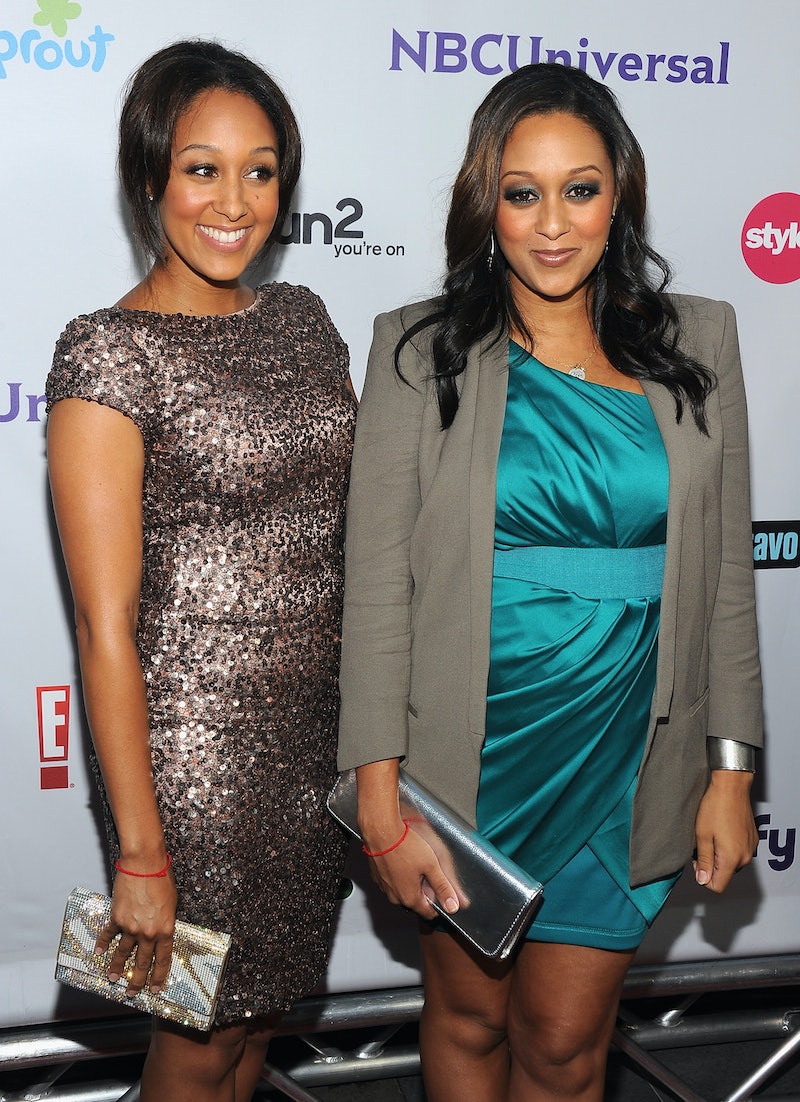 Attention '90s nostalgics: Tamera Mowry-Housely wants a Sister Sister reboot to happen ASAP. She's not alone in her opinion. Apparently the entire cast of the ABC hit are all on board to take their characters into the 21st century. Mowry-Housley sat down with HuffPost Live on Monday, Sept. 28, and was issued the question: "There are a lot of '90s shows coming back...will we see a Sister Sister reunion?" Murmurs about a Sister Sister reunion being "in the works" started in May, but it appears the alleged project hasn't gained any traction.

My thoughts exactly. With so many beloved '90s series getting a reboot, it seems like Sister Sister has the perfect ensemble to follow suit. Not only was the show deft in its comedic prowess, the entire premise was one unique to sitcom fodder. Tia and Tamera were twins given up for adoption, separated at birth after being adopted by different people, and then reunited 14 years later — 14 years later! While that plot line could easily fit into a work of primetime pathos, the series used a comedic landscape that delivered as many hijinks as it did heartwarming moments.

There's no doubt about it. This series needs a reboot, and here are seven reasons why (as if you needed that many reasons).

1. The Theme Song Was One Of Legends

Sorry Friends, Fresh Prince of Bel-Air, and other '90s sitcoms whose theme songs I have downloaded on my iTunes. The Sister Sister theme song — both at its infancy and during its more mature seasons — is where it is at.

Even when they had their differences these two were the ultimate #SisterGoals. Tia and Tamera had each other's backs through thick and thin.

Lisa's sass and unapologetic assertion is something to live by. To be honest, most of her lines are my inner monologue when anyone cuts me off in line at the grocery store.

4. No One Actually Wanted Roger To "Go Home"

More importantly, I've been dying for Roger to grace my screen once more with his gloriously awkward comedic prowess. Speaking of Roger, his portrayer, Marques Houston, has shown a lot of versatility in the entertainment world since exiting the series. Check out his gritty performance in the trailer for Somebody Help Me 2.

I definitely need to see Houston's take on Roger now that he's all grown up.

5. The Chemistry Between Lisa & Ray Campbell

Remember how Lisa and Ray's relationship progressed from hate, to love-hate, and then just to love? I do, and it was magical.

7. There Are So Many More Stories To Tell

The series lasted a meager 120 episodes. While that may seem like a lot to some, I personally felt jilted when I no longer had new Sister Sister at my disposal. A reboot that follows Tia and Tamera's transition from adolescence to full-blown adulthood could give way to storylines on career, marriage, new parenthood, and more!

The cast wants it. The fans want it. Some girl in the coffee shop sitting next to me who I vetted for an opinion just told me that she wants it. A Sister Sister reboot needs to happen.