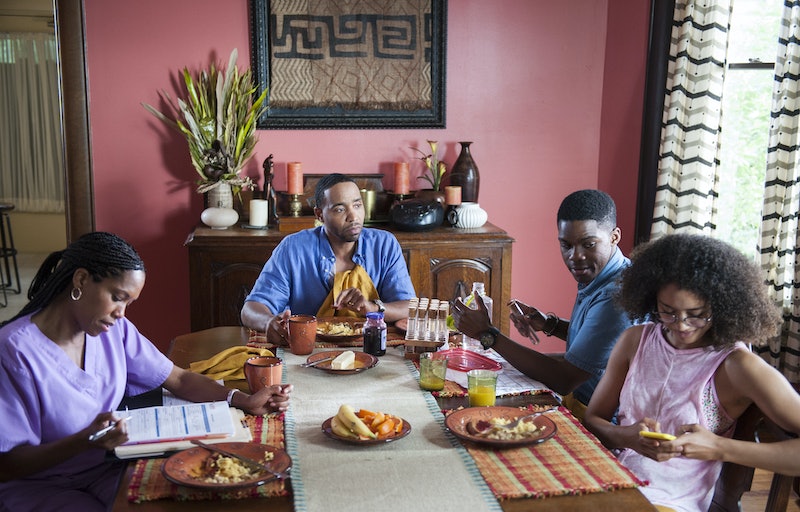 Well, it is here, everyone. Season 2 of The Leftovers has officially premiered and we need to talk about the opening prologue. To recap: The first eight minutes of the episode focus not on the Garveys of Season 1 or on the Murphys, the new characters of Season 2, but on a young cavewoman in some long forgotten prehistoric era. After an earthquake causes a cave-in that kills the rest of her tribe, the woman gives birth by herself under the moonlight. She proceeds to trek through the wilderness with her baby before eventually succumbing to a particularly gruesome snakebite. Shortly after, another young cavewoman comes across her corpse and claims the wailing infant as her own. As the scene transitions to present day, we see that this all occurred outside of what eventually became Jarden, Texas, our main location for most of Season 2 — the only town in the world that suffered zero departures on Oct. 14, 2011.

In an interview with Bustle, Tom Perrotta (whose 2011 novel inspired the show, which he co-created and co-executive produces with Lost showrunner Damon Lindelof) spoke out about that head-scratcher of an opening. "Damon and I sometimes approach storytelling from different angles," he admits. "I'm very much a realist and I think he is someone who loves big, bold, wild gestures. So, I don't think anyone would be surprised if I said Damon generated this idea and was really passionate about it."

While the standalone prehistoric prologue may bring to mind thoughts of the famous opening scene of Stanley Kubrick's 2001: A Spacey Odyssey , Perrotta claims it was a different film entirely that inspired their sojourn into the Stone Age. "We kept thinking about the beginning of the movie A Serious Man," he reveals, referring to the 2009 Best Picture-nominated movie by the Coen Bros. That film starts with a parable about a dybbuk set in a shtetl in long-ago Russia before transitioning to the main setting of 1960s Minnesota. "It's just sort of presented without commentary, as an entirely separate short film. But, it has possibly some thematic parallels," Perrotta explains, echoing his intentions with his own prologue.

So, what the heck was that scene even about? "We're trying not to say too much about what it means or what role it will play in the course of the season; we want viewers to interpret it on their own," he says. "It's obviously something that stands apart from the main narrative, and so I think, as the season develops, that sort of 'overture of the cavewoman' will resonate throughout the episodes that follow." But, it doesn't take too much coaxing for the author spill at least one tantalizing clue about the prologue's significance:

One thing I will say is that this cavewoman is a Leftover. She's someone who has survived this inexplicable catastrophe and she's got to move on with her life. In that sense she is somebody who just reminds the viewer that this is an essential experience: to be a survivor and to figure out a way to move on."

Of course, as anyone who watched the episode knows, the cavewoman didn't exactly succeed in moving on — in fact, she ended up dying painfully and alone. That doesn't exactly bode well for our protagonists now, does it?