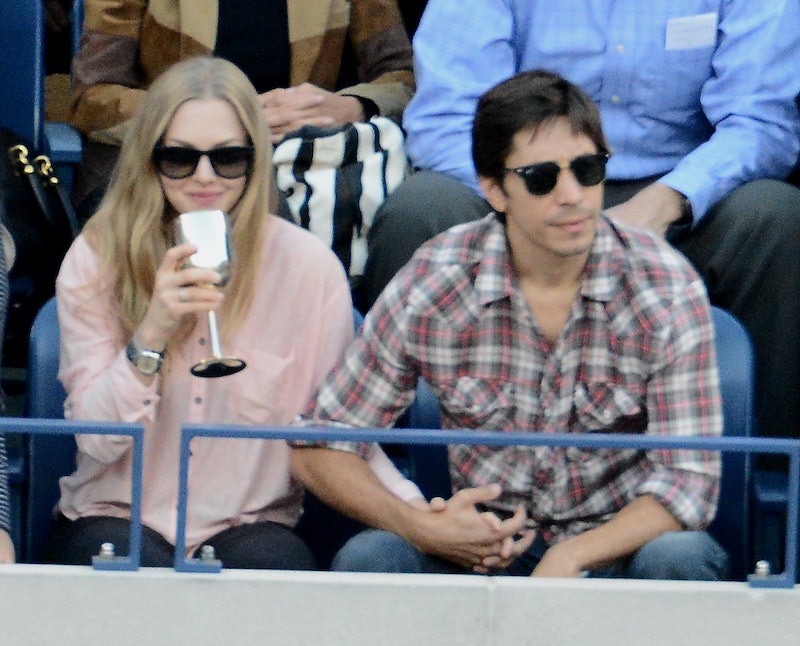 Is anyone out there keeping a record of all the celebrity break-ups that people are anticipating or dreading now that love has fled from Hollywood like a cat fleeing a dog? Because, if so, this latest rumor needs to be added to the record. According to Us Weekly, Amanda Seyfried and Justin Long have broken up after dating for two years. Bustle has reached out to Seyfried and Long's representatives for comment, but has yet to receive a reply. Quoting an anonymous source, the US Weekly article goes on to say that, "It happened a few weeks ago. He’s really heartbroken." He's really heartbroken? I'm really heartbroken. If this news is true, then that's yet another Hollywood couple that we all have to say goodbye to, and what hope do the rest of them even have? The odds are so stacked against love in Hollywood that I can't even imagine why anyone even dates over there anymore.

Maybe I'm being too cynical. After all, Seyfried and Long are a fairly low-key couple. They're not as invisible as, say, Alison Brie and Dave Franco (yes, those two are still engaged), but they're also not as massively famous as, say, Jay Z and Beyoncé (still happily married). They're comfortably on the B-List of couples, which means there might not be too many people out there desperately waiting for the pair to either confirm or deny this rumor. Still, another couple biting the dust doesn't really bode well for the ones that are still going strong, because many of these splits go unexplained. We don't know what's causing 2015 to practically become the year of massive celebrity break-ups, or if there's any kind of pattern we can draw. All we know is that love is dead.

I'm already leaning toward refusing to believe that Seyfried and Long have really broken up, just because my heart needs time to heal from the Amy Poehler and Nick Kroll break-up and the Kermit and Miss Piggy break up. (Especially the Kermit and Miss Piggy break up, seeing as that one's actually confirmed.) Instead of believing that Seyfried and Long have been heartbroken for a few weeks and I didn't notice, I prefer to believe that they'll both laugh when they see the headlines in a few hours and then have a really public date in which they make out a lot to prove this rumor very wrong. Or — OK, no, because that would be a little extreme, but you know what I mean.

If this rumor is true, and Long and Seyfried really have called it quits, then hopefully the two of them will be able to bounce back and become friends. They always seemed so happy together when they were photographed at events, or when they spoke about each other in interviews, so it would be sad if they lost their friendship on top of their romantic relationship. Love might be dead in Hollywood, but who says that friendship has to be dead with it?