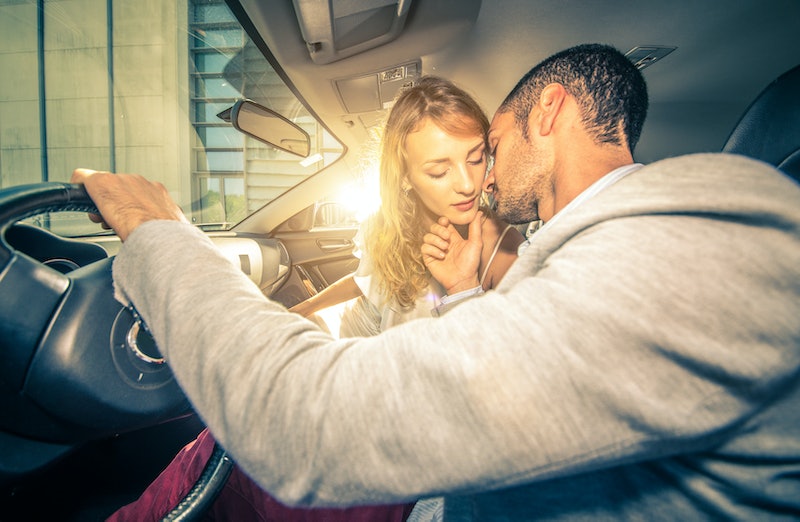 I lost my virginity in a Nissan Xterra, so it's safe to say I know a thing or two about having sex in cars. As a youngster, a car was one of the few places you could get some privacy, and I'm willing to bet that car sex made up a significant portion of your high school sex life. Even if your teen years of sneaking around to have sex are behind you, it can still be fun and exciting to go back to your roots and have a good old-fashioned romp in the backseat.

Despite how romantic Titanic made it look, there's a lot more to consider and plan for when you want to have sex in a car. Getting caught, obviously, is the most pressing concern: Nothing kills the mood faster than getting written up for public nudity. Legality aside, there are some serious benefits to getting it on in the car, too. It's a fun, playful way to spice things up, and will remind you of a time in your life when things were less stressful, and all you had to worry about was which parking lot would be the emptiest at 11 p.m. on a Tuesday.

Here are 11 things you need to know before attempting (for the first or five hundredth time) to have a mind-blowing car sexperience.

1. All Cars Are Not Created Equal

In this case, size does matter: Having sex in a Hummer is not the same as having sex in a Prius. There's also the reality that leather seats feel totally different than cloth seats (sweatier, but less rug burn). Oh, and if your car has those butt-warmer things? A great added bonus that really takes the romance up a notch.

Those things can seriously hurt if you bump into them too hard. Stay far, far away from the gear shift while you're getting your car-f*ck on if you want to avoid severe bruising.

3. Don't Leave The Radio On

As romantic as it might be to listen to "Backseat Freestyle" while you, uhh, backseat freestyle...don't do it. There's nothing wrong with having a raunchy "Car Sex" playlist, but play it on your phone instead of through the car speakers. If you leave your car running, there's a very good chance the battery will die, and you'll have to call someone to jump your car while explaining your sex hair and sweaty visage. And make sure to turn the headlights off if they aren't automatic, because that can also kill the battery (I learned this the hard way).

Pro tip: Don't try doggy style if you're in the driver's seat, unless you want your face smushed against the steering wheel, honking the horn incessantly. Because of the space constraints, certain positions just aren't as feasible in a car. If you're in the front, you're pretty much stuck with girl-on-top, while you have a bit more room to stretch out in the backseat. However, you still can't get as crazy as you can in a king-sized bed, so try to just get the job done in as efficient a manner as possible.

Although exhibitionism isn't a turn-on for everyone, the thrill of ~maybe~ getting caught is still an exciting aspect to having car sex. This comes with some risks, of course: You don't want to actually be spotted with your skirt around your ankles on top of your partner in the passenger seat. Be cautious and make sure you're really alone, and then feel free to enjoy this hot, dirty, and slightly safer version of public sex.

Have you ever tried scrubbing semen off of a car seat? Me neither, but I imagine it's less-than-ideal in a lot of ways. If you're determined to have car sex, be aware that cleaning up afterwards might be a slight pain in the ass. (But if you are the kind of person who has six empty McDonald's bags thrown in you backseat, you probably don't care anyways.)

Bring your yoga mat, because you'll seriously need to stretch out after being squashed up against a window for an hour. It doesn't hurt to do some warming up as well, so you don't have to stop mid-orgasm to stretch out your throbbing hamstring.

Although the limited amount of space you have poses other issues, it can also be a huge asset: When you're in such close quarters and need to be intertwined at all times to make sex possible, it really ups the intimacy level and helps you feel closer (literally and figuratively) to your partner.

Like I mentioned before, car sex really rings true to the days of yore, when you didn't have to worry about taxes or a 401(k). If you're itching to feel young again, planning a secret rendezvous in your car could really bring back the carefree attitude you took for granted in high school.

All the awkwardness of trying to figure out how sex works as a teen was only made worse by the fact that having sex in a car is not exactly ideal or easy. However, if you revisit the backseat as an adult, with a partner who knows what he or she is doing, your experience is guaranteed to be a lot sexier than your teen self remembers.

11. It's Illegal In Some States

Sure, the car may seem like a private, romantic getaway, but if you're in a Taco Bell parking lot and someone's unsuspecting grandmother walks by and sees you getting it on, she's still allowed to tattle on you for public indecency. Be smart and choose a discreet location to park (and maybe get some extra tinting on your windows, to be safe).