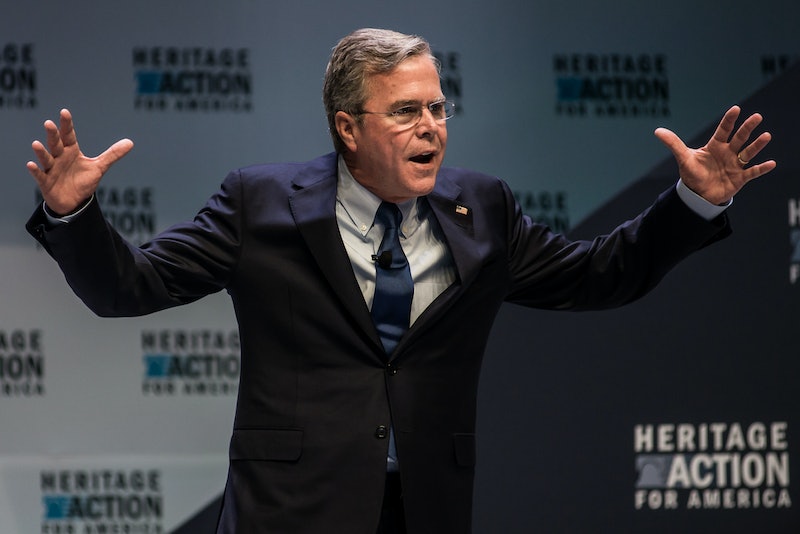 It presidential campaign season, and that means it's a ripe time to draw some Halloween inspiration from our political process. And while you can probably guess that Donald Trump costumes will be all the rage, he of all that high-energy bluster and bravado, what about the guy he's frequently accused of being "low energy?" That's right, former Florida Governor Jeb Bush — surely you could put together a decent Jeb costume, right? But there needs to be a hook, something to make it clever — here's how to be young, pothead Jeb Bush for Halloween, in just six steps.

For the uninitiated, Bush confessed to having smoked marijuana while in college during the last GOP presidential debate, after being called out for hypocrisy by GOP rival Rand Paul, so that portion of his personal history is past the realm of the alleged, and into the realm of the confirmed. And while marijuana is still federally illegal — classified a Schedule 1 drug on-par with things like heroin and cocaine — states like Oregon, Alaska, Colorado and Washington have voted to fully legalize its recreational use. In other words, it's mainstream enough that your Jeb costume won't look too transgressive, unless of course you wear it to a Jeb! for President event.

1. Get A Short, Gray Wig OR Spray-On Hair Coloring

This is a matter of personal preference. On the one hand, a slightly disheveled gray hairpiece could make the costume look all the better — it has that natural, practical effect vibe, and it's also convenient. Why spend time coloring your hair when you can just pop on a wig?

Unfortunately, it's hard to find a costume hairpiece that looks just like Jeb's close-cut, grayed hair. Most of the affordable ones available online run a little longer and fuller than his. But that's remedied easily enough, as you can simply trim down the wig to an acceptable length. Or, of course, if you've got the right hair to pull of the Jeb yourself, maybe you would prefer to go the coloring route — you can easily and cheaply order a can of spray-on gray or silver hair color.

2. Get Some Jeb Glasses

Actually replicating Jeb's narrow-framed eyeglasses isn't advisable, as high quality eyewear can get quite expensive. You'll probably have to make some design sacrifices on this part, but it's important that you find an option that at least partially apes his signature style — thin frames up top, and nothing down below.

If you end up going with a thick frame all around, it'll definitely dilute the Jeb look, although some easily acquired campaign paraphernalia (in a step to come) will remedy that if you're low on options.

3. Get Your Jeb Attire, But It Shouldn't Be Too Nice

If you have one already, any old cheap, charcoal-gray suit will do, preferably with a dark, solid-colored tie. But if you don't have a suit already, it probably isn't worth it to you to buy one just for this occasion — getting a full suit can be pricey, more so than you'd necessarily want for Halloween.

And besides, it shouldn't look too classy — after all, this is pothead Jeb we're going for, here, and some measure of disorientation is probably ideal. Maybe leave one-half of your collar upturned, and of course, let you shirt get a little wrinkly beforehand. Crispness is your enemy.

If you want to go without the jacket, ditch it altogether in favor of a trio of politician-identifying items — some slacks, a white collared shirt rolled up to the forearms, and a flag lapel pin you can fix to your shirt collar. Also, make absolutely sure that you have a visible front breast pocket on the shirt, which will come into play later. This would be the folksier, on-the-trail Jeb look, although sans suit jacket it might not pack the same "hey, a political costume" punch.

Look, maybe you don't want to give money to the Jeb Bush campaign. Hell, neither do I. But some concessions must be made in pursuit of a decent Halloween costume, and in this case, you need some items from the Jeb! store to make it clear to people just who you are. In this case, that'll demand some Jeb! campaign buttons. Just stick one (or hell, all four) of these bad boys around the front of your shirt. The arrangement won't matter much, so long as they're asymmetrically placed. It'll look overly coordinated and strange if they're arranged too precisely — imagine what it'd look like if a bleary-eyed, stoned-to-the-gills Jeb Bush hastily stuck a bunch of pins on himself on the way to the next GOP debate.

Obviously, if you live somewhere where marijuana use is legal you might have a few genuine ones laying around, but for the sake of public discretion, you should stick to a fake for you Halloween festivities — unless you're in a private home where everyone's cool with it, of course. Fake joints are not hard to come by on the internet, and that's an understatement — you can order a jumbo one off Amazon for just under 8 dollars. The size is important, because this is the main hook of the costume. You're not just Jeb, you're stoner Jeb.

You can nab one of these from any Monopoly set you might have, and if you don't have one, they can be bought relatively cheaply.

This is why you need that breast pocket on your collared shirt — the capper to the costume is to safety-pin the card to the inside of the pocket, high enough so that it's text is mostly visible to anyone who inspects closely. Get Out Of Jail Free cards are typically bright orange, so having one sticking from your pocket will induce people to look, and it's the final, highly political twist to the costume. What Bush has admitted to doing is a federal crime, and while he was Governor of Florida people were being sent to prison for marijuana-related felonies, but he never had to suffer these consequences, because he's Jeb!

So, there you have it! You're all ready to be the toast of your Halloween party. Or should I say, "toasted."

More like this
Kourtney Kardashian Got Married In A Heart-Stamped Mini Dress
By Allie Fasanella
Michigan’s Governor Is “Going To Fight Like Hell” To Protect Abortion Access
By Andrea Zelinski
How To Fight For Reproductive Rights, Based On How Much Time You Have
By Courtney Young
LGBT+ Men Fleeing Afghanistan Were Denied Asylum By The Home Office, New Findings Show
By Sam Ramsden
Get Even More From Bustle — Sign Up For The Newsletter