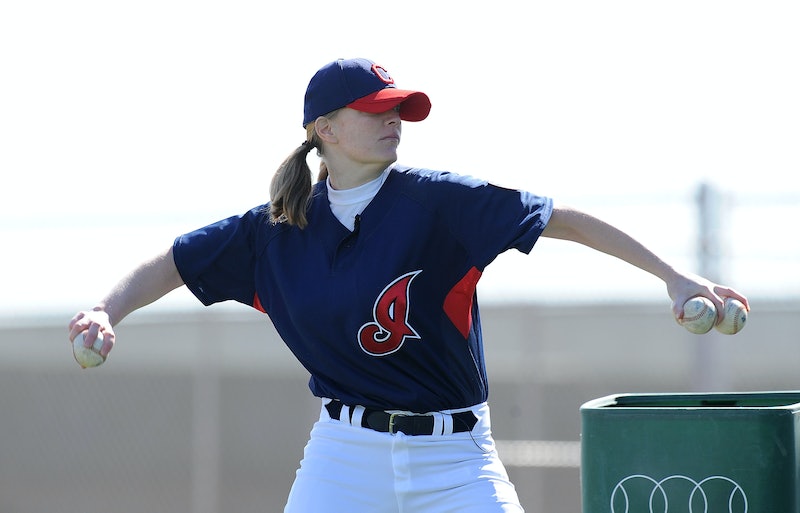 Women have been making history in sports a lot this year. The latest: Major League Baseball's first female coach, Justine Siegal, who was just hired to coach for the Oakland A's. It's a great precedent, and hopefully Siegal won't be the only woman to coach for the MLB for long.

Siegal, age 40, has a Ph.D in sports and exercise psychology and has already coached college and independent baseball during her career. This October, she will add the major leagues to that resume when she coaches as a guest instructor in the A's Instructional League. It's not quite the same as being part of the regular season coaching staff, but it's an important step, and it could potentially lead to a more permanent position in the A's organization. Either way, it's great to see more and more women get coaching opportunities in professional men's sports.

“We feel like Justine has a lot to offer and that (the Instructional League) is a great place to get her feet wet,” A’s assistant general manager David Forst told SFGate. “She’ll be doing a little bit of everything.” He added that nothing further had been promised, and that all parties were clear on that, but that they're "not ruling [a permanent job] out."

“As a rookie coach, I expect to hit a lot of fungos, throw a lot of batting practice and help out wherever they want me to help,” Siegal said. “And I do like talking about life skills; I like to help people achieve their life goals.” She said that being offered a full-time position would be "incredible" but that for now she's just focused on the Instructional League.

Siegal isn't the first female coach to make inroads into the world of men's professional sports this year. In the NBA, Becky Hammon, already the second ever assistant coach in the league, became the NBA's first female coach when she coached the San Antonio Spurs's summer league team, ultimately leading them to victory. Over in the NFL, Jen Welter became the first woman on the league's coaching staff when she took a position as a training camp/preseason intern coach for the Arizona Cardinals. And although she wasn't the first woman to hold such a position, Amelie Mauresmo still made headlines when she was hired as the coach for tennis star Andy Murray.

It's been a year of trailblazers and it's encouraging to see baseball follow other leagues in bringing on more women. For one thing, women deserve at chance at career opportunities in men's professional leagues, especially since such leagues are (sadly) more prestigious and wealthy than their female counterparts. And for another, at a time when so many leagues are grappling with a culture that clearly devalues women, having more women in positions of power within the organization could go a long way to changing that.

So congratulations to Siegal on her milestone and here's hoping that it is the first of many — and that Siegal herself is only the beginning as well.

More like this
5 Crystals To Manifest More Money
By Megan McCarty
Sandra Bullock, Girlboss Extraordinaire
By Matt Harkins & Viviana Olen
What Is Jeanie Buss' Net Worth? The Lakers President Is Uber Rich
By Hugh McIntyre
The 'Hocus Pocus' Sequel Finally Has A Release Date & It Makes Total Sense
By Shannon Barbour and Radhika Menon
Get Even More From Bustle — Sign Up For The Newsletter