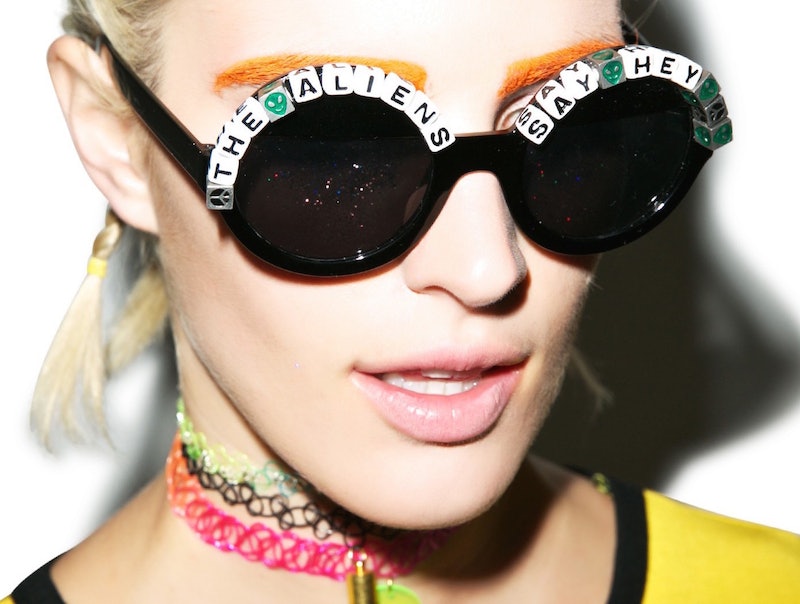 I'll be the first to admit that I don't keep up with scientific space exploration discoveries or what's going on with the moon (let alone cosmic fashion). This week, however, it was difficult to ignore the amazing blood super moon. Before anyone could really calm down from the super moon, though, NASA announced that water was found on Mars on Sept. 28.

If you didn't see the moon or the subsequent announcement for yourself, you likely saw your friends geeking out or turning their blood moon photos into T-shirts. NASA's news arguably jolted the question of extraterrestrial life into the public eye once again. For the ever-of-the-moment Millennial, this means the potential for extraterrestrial-themed fashion is going to be more intense than ever.

Personally, I am more concerned with metallic mini skirts than moon-suits, and I was more of an arts and crafts kid than a space camp one. But I'm not a total space hater. I even think that in fashion and beauty, there's totally a space (pun definitely intended) for out-of-this-world looks.

The thing about cosmic fashion is that it can be totally literal (as in images of space) or super fantasy sci-fi kitsch. Either way, I believe in it. Here are 15 items to rock while you celebrate the (slightly more real) possibilities of life on Mars.

I headed to Australian brand Black Milk Clothing in search of its famous galaxy leggings, but fell for this jersey instead. All of its galaxy-themed items are printed from real photos taken by NASA. Space really is cool, amirite?

Galaxy Chic is the name of this eyeshadow palette and the shades look just like their cosmic namesakes. These hues are perfect for the nebula-loving beauties of the world.

This metallic skirt is a look straight out of my Y2K dreams and the name is very reminiscent of the underrated 'N Sync classic "Space Cowboy."

If this alien choker is giving you all of the '90s space grunge meets Baddie Winkle feels, it's because designer Marina Fini is a Baddie Winkle fave.

This duvet cover shows aerial fireworks from a nebula 20,000 lightyears away and there are plenty of other cosmic styles available. If you've ever wanted to sleep with the stars overhead, consider sleeping immediately under them instead.

Although I admittedly only watched the original Alien movie as a requirement for a gender studies class in college, this tee still makes me laugh.

7. Dark Side Of The Moon

There are no blood moon shades to be found at new makeup brand Black Moon Cosmetics, but this deep purple hue is gothic and cosmic perfection.

8. Head In The Clouds

Even though bucket hats may scream summer festival fashion, I feel that because this one is fully lined, it remains a transitional item you can still wear in fall and be a star in.

This laser cut ring may be small in surface, but it's certainly telling a story of an alien invasion in artistic detail.

Accessory designer Eddie Borgo is known for detailed high end luxury items, but he brings his unique vision to this customizable wristlet for Target.

ModCloth is one brand that has embraced cosmic fashion to the fullest and offers a plethora of options in sizes S to 4X, like this whimsical tee.

Leave it to Shop Jeen to carry wacky yet awesome glow-in-the-dark alien pasties with glitter eyes perfect for some burlesque on the moon.

If I ever had to kick any alien ass, I would definitely want to do it in these combat boots. I am both mesmerized and impressed by the accuracy of the hand-painted pattern.

Dolls Kill is another brand that totally has that whole cosmic grunge/space cowboy look down. The styling of these sunglasses with the alien choker and orange eyebrows is extraterrestrial chicness on point.

There's something wonderfully simplistic about this gold cuff. Wrapping around the upper arm with a moon on one side and a star on the other, I can't help but think of that cliche that goes, "Shoot for the moon. Even if you miss, you'll land among the stars."

So appreciate the stars, beware of aliens, and look out-of-this-world while you wait for someone to finally colonize Mars.

More like this
Fashion Trends From 2002 Making A Comeback
By Avery Matera
‘90s Streetwear Brands That Are Making A Major Comeback
By Dominique Norman
M.A.C. Is Launching An ’80s-Chic Stranger Things Makeup Collection
By Olivia Rose Ferreiro
Bath & Body Works' Summer Scents Are Extra Dreamy
By Paris Giles
Get Even More From Bustle — Sign Up For The Newsletter