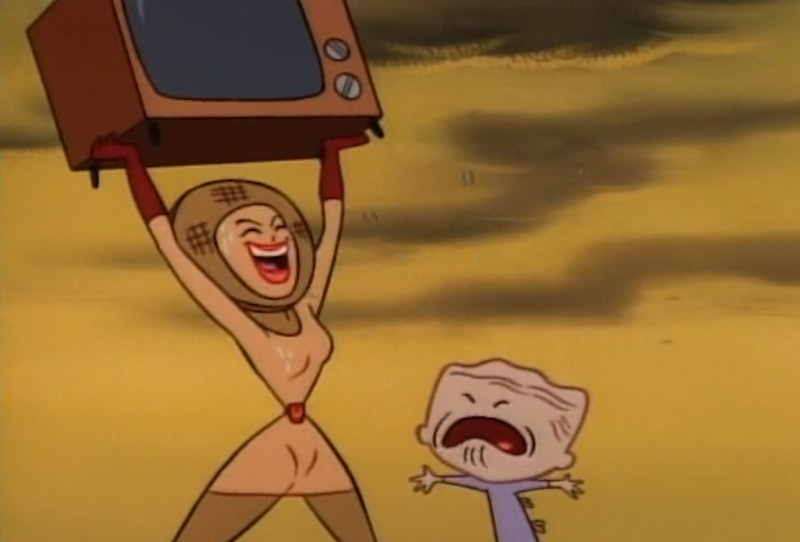 There are plenty of Nickelodeon characters from the '90s that are unforgettable. Tommy Pickles, Alex Mack, and Arnold (of Hey Arnold!, of course) are all permanent fixtures of the pop culture landscape — but what about all of the other Nickelodeon characters who aren't as recognizable by name? Though they were all great characters, the sad truth is, not every character can be as memorable as Ren or Stimpy. Some characters are doomed to go the way of that one member of The Midnight Society who completely disappeared after Season 1 of Are You Afraid of the Dark?, or the mysterious Mr. Smith who only haunted Hey Arnold! for one season. Needless to say, only the most hardcore '90s Nick fans will remember these obscure Nickelodeon characters who populated the sidelines of your favorite shows.

For everyone else, this list will likely trigger a few "aha! moments" as you remember a character you haven't thought of in years — or it'll just leave you scratching your head because no one has the brain space to remember Dave Watt. Either way, prepare to delve deep into the world of '90s Nick shows to find the most obscure characters your favorite childhood channel had to offer.

Don't blame me if reading this list results in a deep desire to revisit Rugrats just so you can confirm that yes, that one baby from that one episode did actually exist.

There's only one member of The Midnight Society who disappeared without so much as a cursory mention of transferring schools or his family moving away, and that member was Eric. Eric appeared throughout Season 1, but he was the kind of jerk who left his bro stranded in the woods with no flashlight — so maybe the group decided they would be better off without Eric and his "fun" pranks.

Dave was an important part of the Alex Mack mythos since he was driving the truck that dowsed Alex in chemicals — but despite his ongoing presence, he was a pretty forgettable guy unless you still watch Alex Mack on the regular.

The bizarro world version of Tommy and his crew were The McNulty brothers, who were led by their eldest brother — and Angelica stand in — Timmy. The babies were not big fans of each other, but that's not surprising. What is surprising is that seeing their exact mirrors didn't trigger an existential crisis.

Ah, the mysterious Mr. Smith. A character does count as a character even if he's never seen, right? Mr. Smith, who was clearly a retired James Bond, lived in the boarding house for one season and then he was never mentioned again.

Dizzle is one of those characters I can't help but feel sorry for. She had a huge crush on Ickis and was in a ton of episodes, but she rarely ever had any lines. Plus her name is really unfortunate.

Mona the mail carrier was a minor character in Salute Your Shorts— but the actress who played her, Christine Cavanaugh, was a major player in the Nick universe as she voiced both Rugrats' Chuckie and Aaahh!!! Real Monsters' Oblina.

Patti's BFF Connie went through so many changes, the casual viewer would be excused for thinking she was multiple characters. Back in Season 1, Connie didn't even have a name — but by the time Disney took over Doug, she'd experienced a massive makeover.

8. Baggin' Saggin' Barry, All That

I have no idea why Barry isn't more popular. His pants were the Muggle equivalent of Hermione's purse in The Deathly Hallows, and there's no way that's not cool.

9. Elsie Soaperstein, Clarissa Explains It All

Little Michelle Trachtenberg terrorized Clarissa as the daughter of the oft-mentioned, but rarely seen Soapersteins. Elsie's biggest offense was her complete disrespect for the sanctity of the VHS tape.

Libby wasn't around much, but she was skilled. The kid kept herself awake in "Nightcrawlers" with solar powered sneezes, so basically, she is my hero.

The poor man's version of Captain Planet, Captain Compost Heap was exactly what it says on the can. At least he had a snazzy banana hat.

13. Cheeseburger Doyle, All That

I happen to think a cheeseburger P.I. is genius — but Cheeseburger Doyle only appeared in Season 6 of All That, so I guess I'm one of the few people who appreciate talking cheeseburgers who solve crimes.

Didi had a brother, you guys, and babysitting Angelica actually put him off having kids forever. That's probably why Uncle Ben only stopped by on special occasions.

Much like me, Chocolate Boy only had one character trait and it happened to be an obsession with chocolate. If only he hadn't given up chocolate for radishes — we could have been BFFs.

Stig was the last new member of the original Midnight Society — and while he didn't get many chances to wow the audience with his storytelling skills, he is responsible for "The Tale of Station 109.1"... also known as the Ryan Gosling episode.

Shelby's replacement friends were both fun characters in their own right, but that didn't change the fact that they had to follow in the footsteps of her original buddies Noah and Cindy. At the end of the day, they just weren't as memorable as Shelby's original partners in solving crime.

If you remembered all of the characters on this list, then you deserve a Nick super fan crown and a bucket of slime because you are a true Nick kid, my friend.