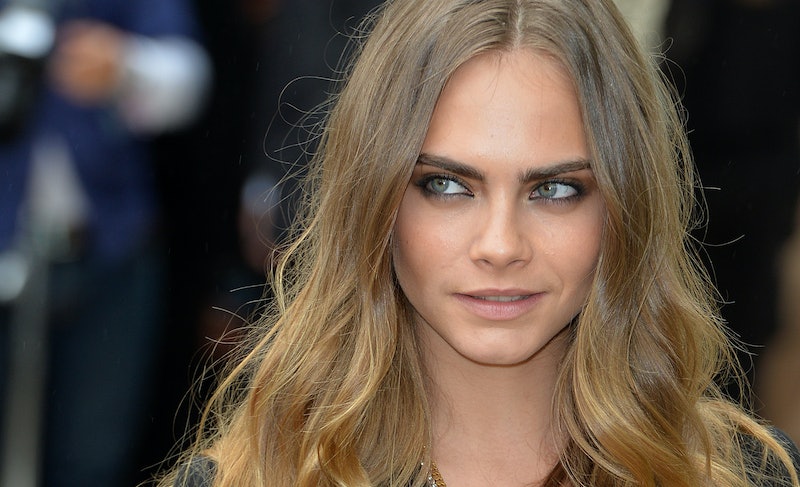 When you say the name "Cara Delevingne" to me, the first word I'm going to think of is "zany." She exhibits that side of herself on Instagram, during interviews, and apparently even during her first meeting with Nat Wolff, according to his description of Delevingne's Paper Towns audition. In case you needed any more proof that Delevingne is a real, genuine person and just as much herself behind the cameras as she is in front of them, look no further than her Paper Towns' costar Nat Wolff's description of one of her early auditions. It involves taking off her shoes and running around barefoot like a loon... because of course it does.

She came in to the chemistry read, I already had the part, and she didn't. And she came into the chemistry read... and she took her shoes off and she started running around and saying, like, "I just want to embarrass myself now so I'm not embarrassed later. " And immediately I was like, she has the part, she's absolutely crazy, she's super talented... and she was perfect.

Of course she was! Because she's fearless, which is a word that Wolff uses to describe Delevingne as well. I personally didn't understand the fallout after that awkward interview, because I thought it was pretty clear that Delevingne was just being herself and reacting as you would if you were up early in the morning to do interview after interview with a lag and no IV in your arm that lead directly to a bag of caffeine. We always say that we want our stars to be real, and then we punish Delevingne for refusing to put on that happy-smiley façade that we say we don't want? Not great.

Delevingne really is the person she presents herself as, and we need to appreciate and reward that instead of punishing her for it by raking her through the media. Or, actually, do whatever you want, y'know? Because, if are two things Delevingne has made crystal clear, it's that she doesn't care what we think of her. So sorry if you were expecting just another pretty face, but that's not Cara Delevingne's game, and she can 1000 percent take care of herself.

Check out the interview below.