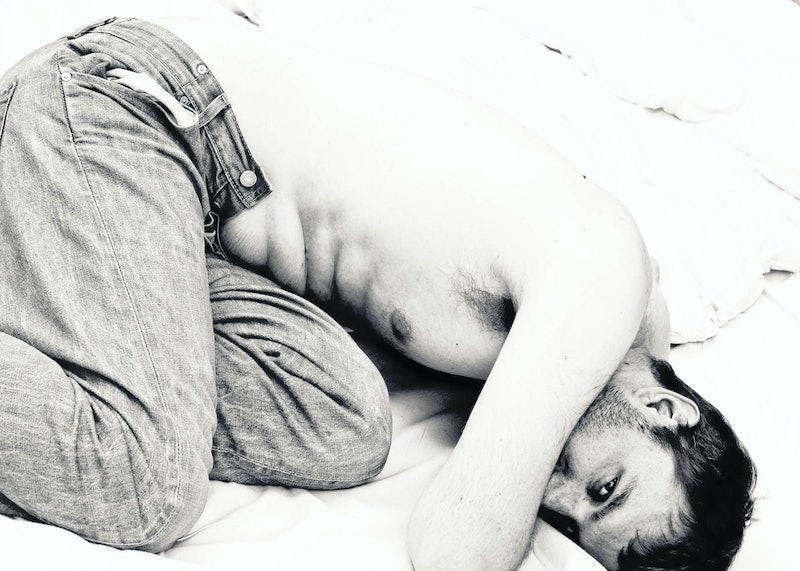 We’re always hearing that we could be having better sex, a better orgasm, or a better relationship. But how often do we hear the nitty-gritty of how we can actually better understand our deepest desires and most embarrassing questions? Bustle has enlisted Vanessa Marin, a sex therapist, to help us out with the details. No gender, sexual orientation, or question is off limits, and all questions remain anonymous. Now, onto today’s topic: what to do if your boyfriend or girlfriend doesn't want to have sex.

Q: I’ve been with my boyfriend for over a year. Our sex life was great in the beginning of the relationship, but things have slowed down a lot over the last six months. I don't know what's going on, because I still feel so much desire for him. He has been stressed out about work lately, but I have caught him looking at porn on more than a few occasions. I should mention that he’s the one who usually initiates. I've always had a higher sex drive than he does, so I feel sensitive about initiating. Why doesn't my boyfriend want me?

A: Thanks for your question! Even though most people understand that relationships can go through sexual ruts, it still sucks to be smack dab in the middle of one. From your question, it seems like there could be a lot of different things going on with your boyfriend and your relationship. Here are seven steps to consider when it feels like your partner’s passion is gone.

1. Ask Them About It

Sex drives are complex, and there are a number of things that could be going on with your parter. There’s no way for you to know unless you ask them about it. Say something like, “I want to check in with you about our sex life. Is now a good time?”

If they're ready, you can get the conversation going with something like, “I feel like we’ve been a little distant from each other lately, and I wanted to see if you’re feeling the same way.” From there, you may want to try something along the lines of, “I know it’s hard to maintain an active sex life when we’ve got so much going on, but I’d love for us to try to prioritize making time for each other. How do you think we can do that?” You want to have an honest, collaborative conversation about how the two of you can get things back on track.

I know that the idea of talking to your partner about this probably seems intimidating. But it really is the best thing that you can do. Being able to communicate about sex is vital for any relationship. This will get much easier over time, I promise!

2. Talk About Your Normal

You said in your question that things started slowing down about six months into your relationship, which is a pretty normal timeframe for the “honeymoon period” to wear off. It’s very possible that the amount of sex you guys are having right now actually feels just fine to him. During a neutral time (not when you're trying to initiate sex), try asking him, “what frequency of sex feels normal to you?” If it turns out that he’s satisfied with things as they are, you may have some larger compatibility questions to think about.

3. Be A Supportive Partner

You mentioned that your boyfriend's been stressed out a lot from work. Most people underestimate just how badly stress can destroy a sex drive. It’s quite possible that stress is the sole culprit here. Try asking him to talk about his stress more.

Ask him, “what can I do to help you feel more relaxed when you get home?” Offer to do things that you already know make him feel better. Or encourage him to get more support by talking to friends or family, exercising, or seeing a therapist.

5. Initiate Sex When You Want It

Let’s talk about the fact that you say you don’t initiate sex. First of all, I completely understand. Being the partner with the higher sex drive always feels vulnerable, because you’re far more likely to get turned down than your partner is. It can be particularly difficult for heterosexual women who are the higher sex drive partner, since our culture always views the man as the one who should want sex more often. I work with so many women who have higher sex drives than their partners, and they always feel embarrassed, undesirable, and even unfeminine.

While these reactions are understandable, they’re not doing you any favors. I’m not going to sugarcoat it for you — being turned down for sex is always going to feel vulnerable. But that doesn’t mean you should cut yourself off and stop initiating entirely. Part of being an adult means asking for what you want, even if there’s a chance you won’t get it. Truly, there is no need to be ashamed. Your sex drive is a beautiful thing. It’s amazing that you’re still feeling desire for him. Your relationship needs an injection of passion right now, so denying yourself yours isn’t the solution. Let your passion feed your relationship and reignite his.

There’s also a very real chance that your partner hasn’t been initiating as much because they're tired of being the one always in the driver’s seat. Maybe they want to step back and let you take the wheel for a change.

So many people don’t realize that having a hot and active sex life requires a lot of effort. We’re fed all these ideas of perfect, effortless relationships, but the reality is that all relationships need a little kickstart from time to time. Would the two of you be willing to shake things up in the bedroom and try some new things? To be clear, it’s not your responsibility to be the only one making the effort, but your partner may just be going through a rough period in their life right now and need you to take the lead this time.

If you go through all these steps and nothing has changed, it may be time to re-evaluate whether or not the two of you are truly compatible. I’m wishing the best for you both, and hoping it doesn’t get to that point!