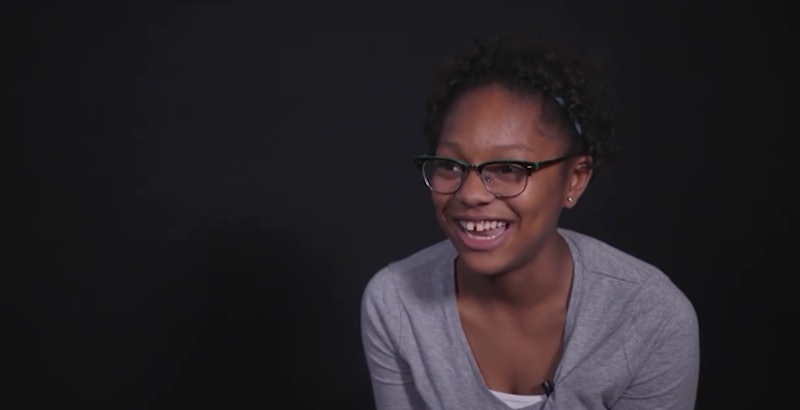 To prove that when it comes to dating and love, we can all still act pretty damn childish, The Atlantic asked a handful of middle school kids, “What is dating like?” The seventh grade boys and girls had some pretty interesting ideas on what dating, at least at their age is like, in regards to their personal experiences and what they’ve witnessed in the hallways of school. But what is most interesting about the video is that dating at 12 and 13 isn’t all that different from dating as an adult. In other words, you can never go wrong with heading to Chipotle on a date, especially a first date.

Although the kids were fairly adamant about the fact that dating at their age isn’t exactly like dating as an adult, because it’s “not very serious,” “we’re in middle school so relationships might not even carry on that long,” and “you can’t do anything at this age, I mean you can, but you shouldn’t,” there were still some places where things overlapped.

Based on what these kiddos have to say, a couple of whom are far more mature than most of the guys I’ve dated, here are 10 ways dating hasn’t changed since seventh grade.

This is very true. I don't know anyone who actually talks on the phone when they're dating or even in a serious relationship for that matter. Texting is really the only way to communicate.

Duh! Of course you go to Chipotle! If you really want to impress the person you're dating, you obviously take them to Chipotle!

3. "CVS Isn’t A Date Spot But They Have Really Good And Cheap Candy, So I Go There"

It's extremely important, very early on, to find someone who knows where the cheap candy is. What this means is that later in life, they'll know where the cheap beer is... which you can sneak into Chipotle.

4. "You Can Either Be Really Chill With It, But Some People Take It Too Far"

Exactly. Some people really do take it too far, too fast, then it's a mess. Slow and steady wins the race, people.

5. "I Have Friends Who Are Boys But I Don’t Really Like Anybody… They’re All Really Immature"

I really want to track down this little darling and tell her a very sad, but all too real truth: They never mature, love. Like, ever.

6. "That Kind Of Pressure; I Don’t Really Need That Right Now In My Life"

This kid is the perfect example of someone who has a head on his shoulders, and also the perfect excuse we've all been guilty of using when we're just not into someone.

In the adult world, this translates to, "I don't like you that way, but I still want to have sex with you." I guess fear of commitment starts early in some.

8. "I Liked A Boy And He Liked Me Back, But We Never Really Called It Dating"

Whether you're 12 or 28, dating remains one of the most complex things in the world. And labels... ah. They really do a number on couples.

9. "If I Really Wanted To Let Them Know, I Guess Maybe It Would Be Over Text Or In Person"

I love this kid. It's like he's willing to do the text thing, because that's what people do in the dating world, but he's already man enough to just put himself right out there.

10. "I’d Probably Try To Become Friends With Them First And See What They’re Interested In"

It's basically like online dating, but in person. Groundbreaking, isn't?