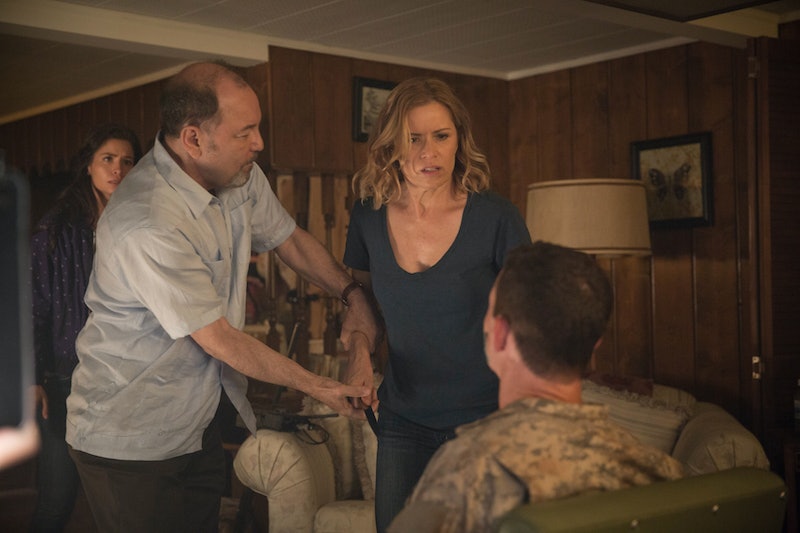 Spinoff series usually don't do as well as the shows that spawned them. In spite of this, Fear The Walking Dead has overcome its spinoff status to have a massive series premiere. Now that Season 1 is coming to a close (followed the week after by the season premiere of its fear-less parent series The Walking Dead), it's time to start talking about Fear The Walking Dead S eason 2 and what fans can expect when the Clark family returns to their television screens.

Here's what you can expect from Season 2 of Fear The Walking Dead.

Over Twice As Many Episodes

Season 2 of Fear The Walking Dead is going to have a whopping 15 episodes, making it 150 percent larger than Season 1. In less than six episodes, the world as the Clarks knew it has gone from normal, to being under complete military control and at risk of being consumed by cannibalistic reanimated corpses. If things continue to progress at this pace, the world of Fear The Walking Dead is in for some grand-scale mayhem by the end of Season 2.

The Clarks Will Still Be At The Center Of It All

It Will Be Affected By Flight 462

Fear The Walking Dead: Flight 462 debuts on Oct. 4 on AMC.com, and will be airing during commercial breaks of Season 6 of The Walking Dead. The miniseries will follow the events on a flight in the air as the passengers become aware of the zombie apocalypse in a very violent manner. What's unique about this spinoff of a spinoff, is that one of the characters from the miniseries will become a new character on Season 2 of Fear TWD, according to Entertainment Weekly. If this flight happens to bring big consequences, it could be the most important flight on television since Oceanic Flight 815.

Things Will Get Worse — Much Worse

The world of Fear The Walking Dead comes to an end in the amount of time it took for Rick Grimes to wake up from a coma in the pilot of The Walking Dead. As Fear TWD continues, the Clarks will start to see the world become progressively more overrun by zombies, will probably see a lot of death, and will see the world as they know it fall apart in front of their eyes. The only thing that is 100 percent certain about the events that will occur during Fear The Walking Dead's second season is that nothing will be getting better for anyone any time soon.