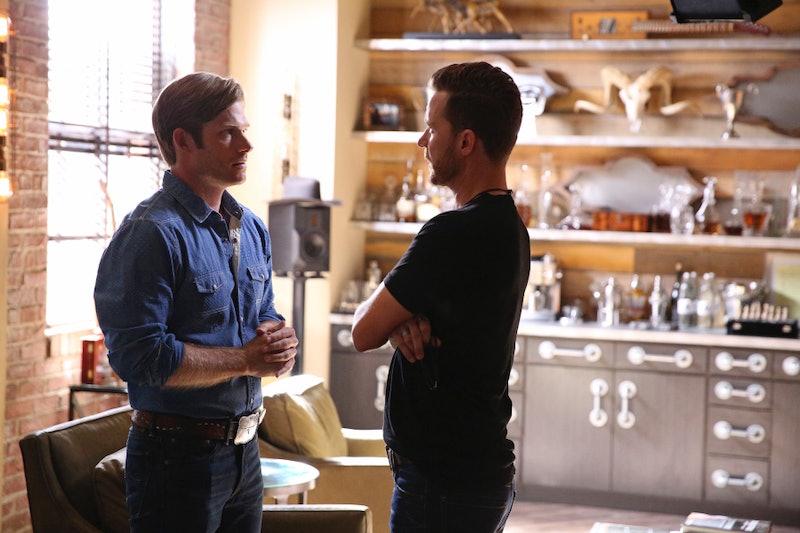 One of my favorite plot points last season on Nashville was Will Lexington coming out as gay in the Season 3 finale, proving that the show can keep storylines fresh. Will’s likable character and heartbreaking struggles breathed new life into the musical drama, but his big moment is not exactly doing anything for his career. After announcing that he was gay, Will was put on ice by his label head, Luke Wheeler, who has no idea what to do with him. Unfortunately for Will, Luke has a marketing guru (and a date, it seems) who is telling him to drop Will because supposedly people who like Luke Wheeler don’t like gay people, and he's ruining his brand by keeping Will near him. Sigh.

Luke, of course, doesn’t have the heart to make a decision to drop Will, so he keeps him out of the loop for a bit. Will then attends an industry party for Juliette’s new album, and, man, is he persona non grata. No one wants to talk to him, stand next to him, or even see him there — simply because he’s gay and therefore being seen as a professional liability. Later, after the party, Luke decides to axe Will from the label, saying, "The community and our fan base... they just don't... I'm sorry, son. I'm going to have to drop you from the label." Then he adds insult to injury by offering to record some of Will's songs on his new album "so they get heard." Um, no, Luke. You can take your songs and shove it.

This is completely frustrating to see, because Will is extremely talented and he’s being treated so badly by the people around him. Luke was very willing to give the world to Will when he thought he was a straight, hunky, money-making machine, but as an out gay man? Not so much. This bigotry is disgusting in any way, shape, or form, but it's especially gross when it comes from someone you thought you could trust (like Will trusts Luke). In time, I hope that Will goes on to prove to Luke that he can have a career while showing the public his true self, and be all the more successful for it.