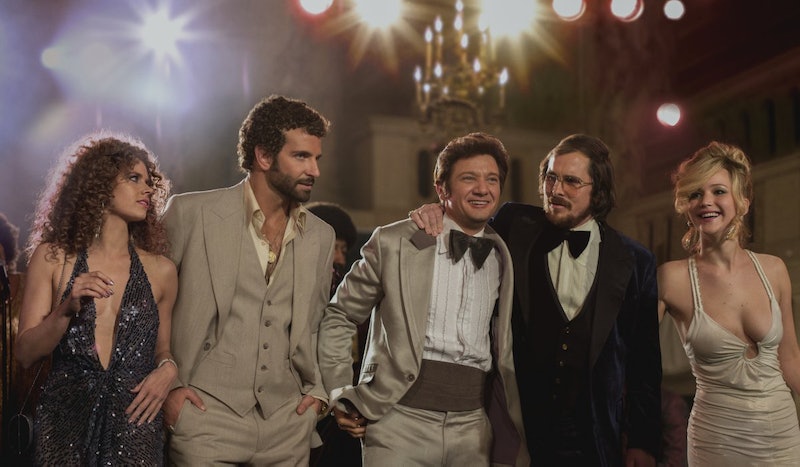 The Oscars are still over two months away, and while the winners of most categories are anyone's guess (AmyAdams or Jennifer Lawrence? Jared Leto or Michael Fassbender?), one competition seems to have already crowned its champion, and it's the one you'd least expect — Best Picture. The top category at the Academy Awards is typically the most debatable, seeing as there can be anywhere up to 10 worthy, beloved candidates vying to claim the top prize. This year, though, most critics have narrowed down the race to only two potential nominees they deem worth winning: 12 Years a Slave and Gravity.

There's definitely reason for critics to be placing their bets on one of these two movies. Both 12 Years a Slave and Gravity gained huge notice when they were released earlier this year for their unique settings, jaw-dropping (albeit in very different ways) visuals, and heavy emotional impacts. Critical praise for the films has been nearly unanimous, and seemingly everyone agrees that one of these two movies will take home the Best Picture title come March. Except me.

While both 12 Years a Slave and Gravity are wonderful films, I don't believe either of them will win Best Picture. My vote for the winner? American Hustle , that loud, funny, star-studded movie released just a few weeks ago. The film may seem like a wildcard to most of you, but hear me out before writing it off as a real Best Picture possibility. Here are five reasons why American Hustle will take home the trophy:

1. It's the Only One that Makes Sense to Win

Oscar nominations won't be announced until Jan. 16, but unless voters suddenly decide to expand their horizons (and let's be real, it's the Oscars, that won't happen), these are the nine movies I expect to be nominated: 12 Years a Slave. Gravity. American Hustle. Her. Inside Llewyn Davis. The Wolf of Wall Street. Philomena. Nebraska. Captain Phillips. Sure, Saving Mr. Banks or The Butler could possibly find their ways in, but that's looking more and more doubtful each day.

So this is why American Hustle is the clear winner, by process of elimination: Captain Phillips isn't good enough. Neither is Nebraska. Philomena is great, but too indie for most voters' taste. The Wolf of Wall Street is overlong and way too loud. Inside Llewyn Davis is too artsy. Same goes for Her. Gravity deserves honors for acting and visuals, but as a movie, it's not nearly as good as its competitors. 12 Years a Slave is a wonderful film that earned viewers' respect, but likely not their votes for favorite movie of the year. What does that leave? American Hustle.

American Hustle opens with a disclaimer: "some of this actually happened." The movie may not be entirely based on the truth, but in Oscar voters' eyes, some is worth far more than nothing. The Oscars love films based even partly on true stories, like Argo, The King's Speech, and A Beautiful Mind, among others. American Hustle, which revolves around the very-real Abscam operation of the late '70s, fits right in.

3. It's Directed by David O. Russell

Russell may only have directed three movies so far worth the Oscars' attention (sorry, I Heart Huckabees), but all of them have been so good that it's time he's anointed a winner. Both The Fighter and Silver Linings Playbook were fantastic films, earning Russell two Best Director nominations and another nod, thanks to Playbook, for Best Screenplay, yet no wins. American Hustle, though, is his most accomplished work yet, and Oscar voters might decide that it's high time to give Russell an honor that's eluded him for the past few years. The Best Director race is likely too crowded for him to win, but Best Picture is an entirely different story.

All of the actors in American Hustle are incredible, each giving career-defining performances that are sure to earn the film more than enough nominations in the acting categories. Jennifer Lawrence's performance, in particular, has been highlighted by critics, but even if the actress hadn't been excellent in the film, her appearance in it alone would've been enough to boost American Hustle's chances of winning Best Picture. 2013 was The Year of Jennifer Lawrence, and any movie she stars in automatically has a better chance of getting critical love.

4. It's What Moviegoing's Supposed to Be

It's not as controversial as 12 Years a Slave or as thoughtful as Inside Llewyn Davis or as pulse-racing as Captain Phillips, but American Hustle is, by far, the most entertaining movie on the list. Thanks to powerhouse performances, whip-smart dialogue, and cringe-inducing fashions (see: Bradley Cooper's perm), American Hustle is what moviegoing used to be: pure entertainment. It's funny, fast-paced, and emotionally affecting, big and loud in the best ways possible. Simply put, seeing American Hustle is an experience. You leave the theater feeling deeply, incredibly alive. And that's what moviegoing, and the Oscars, are supposed to be all about.