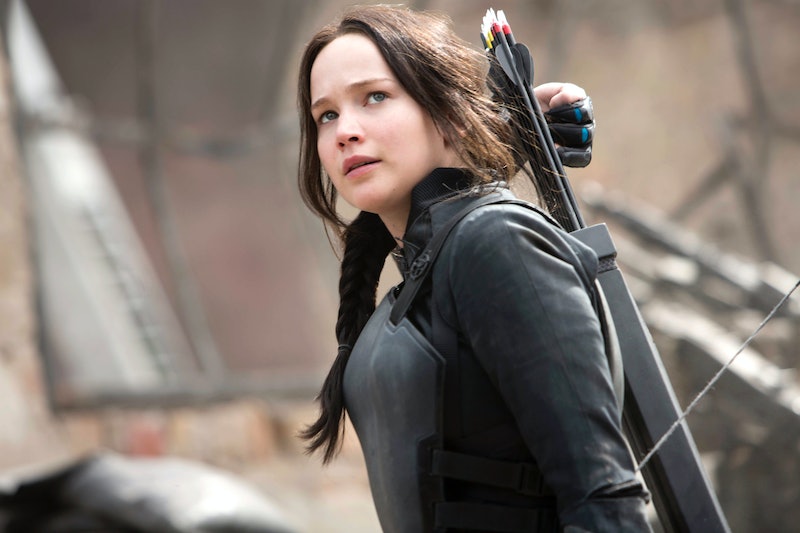 I doubt there’s a single person alive who doubts that Katniss Everdeen is one of the biggest badasses to grace YA cinema. I mean, really, she’s the Girl On Fire, who only came out to have a good time (ahem, protect her sister from having to do it) and is honestly feeling so attacked right now (literally, spiritually, metaphorically). However, I have to say that there is a certain amount of poetry to this final Mockingjay — Part 2 poster starring Katniss, in that they are going out of their way to be as theatrical and dramatic as possible. Especially when you compare them to the posters for Mockingjay — Part 1, in which Katniss was decked out in all black and largely hidden until the tail end of advertising. No, in Mockingjay — Part 2, Katniss is loud, proud, and in your face about how it’s time, at last, for her to get this job of taking down the Capitol done once and for all.

Take the most recent, and final, Mockingjay — Part 2 poster uploaded by Fandango for example. The exclusive poster features Katniss dressed in her bright red battle garb, her bow and arrow pulled taught toward the enemy, as a flaming mockingjay spreads its wings behind her. The tagline, “Nothing can prepare you for the end,” adds to the immediacy of the moment. The stakes have never been higher. Katniss has never shined brighter. You’ve never seen a hero like this. Which is a lovely distraction from the fact that Katniss loses so much in this film that it’s a wonder she’s even able to get out of bed in the morning. Seriously, jeez.

It’s a gorgeous poster, but it does also call to mind the phrase “crash and burn” — which is part of what Katniss does in Mockingjay, Part 2. Her every single value is tested, her relationship with everyone around her changes, and everything that she is fighting for changes. Spoiler alert: she makes it out alive. But at what cost, guys? At what cost? This moment just seems like the calm before the storm for our beloved heroine, and it’s not even that calm of a calm. I want to take Katniss into my arms and let her burn herself out protected by my hug, because she is a precious cinnamon roll who could probably kill you but still needs to be protected.

I don’t think any of us can deny that the Mockingjay — Part 2 advertising game is on fleek, but that’s precisely what scares me about going to watch the film. I know what’s coming. I know what Katniss has to do, what Katniss has to face, and how much Katniss has to lose. No amount of pictures of the girl on fire are going to distract me from the fact that her poor life is on fire as well, and I know that I’ll be sobbing my way to the epic conclusion of this epic franchise. But then, that's Jennifer Lawrence for you. Always giving you the feels.