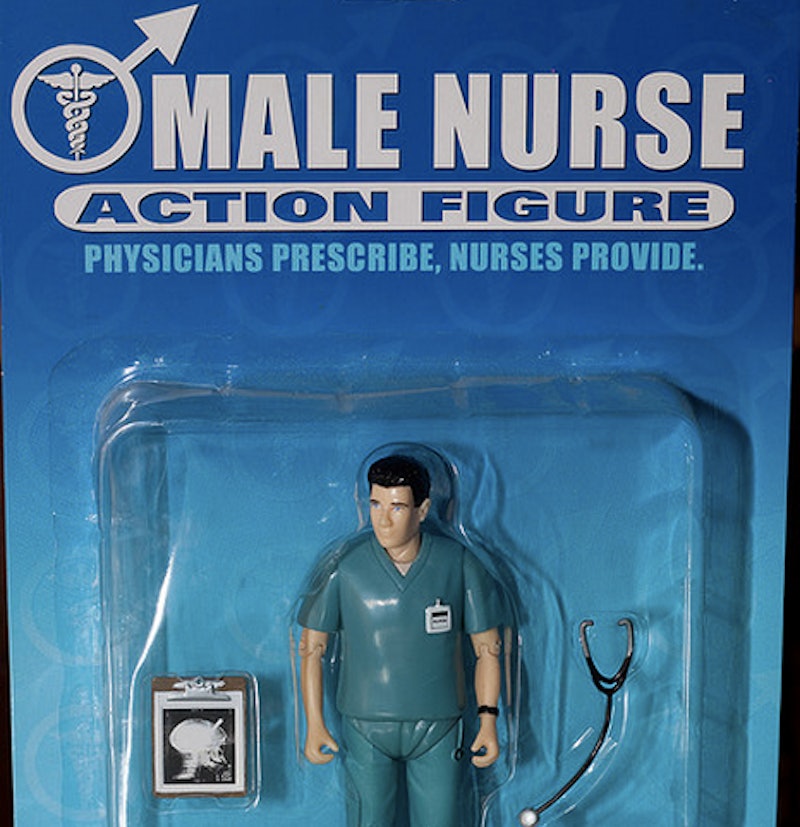 We all know that women get the short end of the traditional gender roles stick, but that doesn't mean men are exactly winning when such rigid roles are enforced. The Los Angeles Times looks at how "the gender revolution" has really lagged when it comes to masculinity. Effectively, "men are stuck," as Psychology of Men and Masculinity editor Ronald F. Levant said.

Evidence of this stagnation can be seen in U.S. Census Bureau data, according to the Times. While women are making gains in stereotypically male fields, men remain rare in traditionally feminine jobs (for instance, less than 2 percent of preschool and kindergarten teachers are men). Fathers are still judged more harshly for taking paternity leave. And though working mothers are now the norm, no corresponding surge in stay-at-home dads can be seen.

But let's put on our devil's advocate rather than end-of-men hat for a moment here. The career fields men aren't flocking to are generally lower-paid and less prestigious than the ones they dominate (doctors versus nurses, professors versus pre-school teachers). And men may be shamed for taking time off for kids, but women are damned if they do and damned if they don't on that front. For individual men who want to go into nursing or be stay-at-home dads, the stigma against these things obviously sucks. But systemically, rigid gender expectations still benefit men more than women.

Of course, we'd all be better off in a society where individuals are allowed to flourish — without stigma — in whatever way they see fit, regardless of what genitalia they were born with. In order to get here, men need to work harder at redefining masculinity, gender experts told the Times. But in explaining the heightened anxiety over little boys doing "girl things" than vice versa, law professor Clifford Rosky says it's because "masculinity is valued more than femininity." Exactly. Men get shit for doing feminine things because feminine things are still seen as less important, rational, desirable. Looks like we still have a long way to go at redefining femininity, too.

More like this
Here's How To Support Jewish People Amid Rising Antisemitism
By Hannah Orenstein
Prince William Condemns “Unacceptable” Comments Made To A Black Guest At Buckingham Palace
By Shahed Ezaydi
The 15 Best Reading Journals For Book Lovers
By Debbie Lee
Here’s Your Daily Horoscope For December 6, 2022
By Mecca Woods
Get Even More From Bustle — Sign Up For The Newsletter