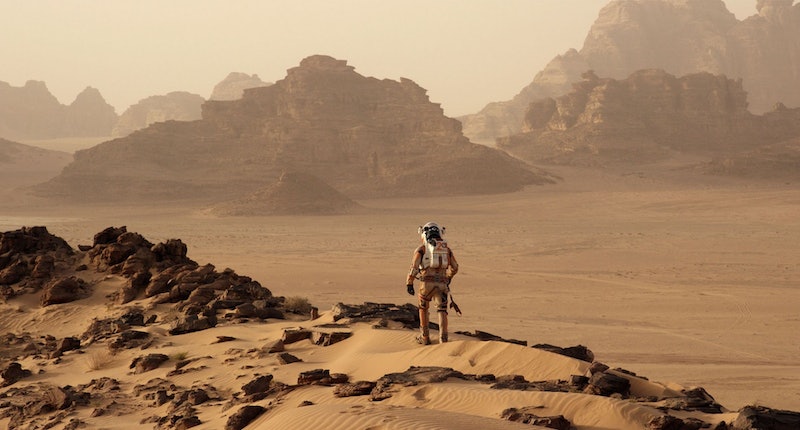 Realistic, science-based space movies have become big business in Hollywood. In 2013, Gravity was perhaps the most talked-about movie of the year and cleaned up at the Oscars. In 2014, Interstellar brought Christopher Nolan's brand of mind-bending thriller to the outer reaches of space on its way to a $675 million worldwide haul. And now in 2015, The Martian is poised to conquer the box office and is fueling dreams of mankind setting foot on Mars for real in the near future. The films certainly have some similarities, especially Gravity and The Martian (Interstellar is still a bit far-fetched), so much so that a lot of people are suggesting that the two films are basically the same movie. But despite what you may have heard, I'm here to tell you that no, The Martian and Gravity are not the same film.

"But, they look so similar!" you say. And I concede that on the surface, they do. They're both movies that take a realistic approach to space travel, eschewing menacing aliens for the actual dangers of being exposed out in the universe. They both feature their protagonists stranded in outer space and having to use their cunning and know-how to survive. And they each happen to star one of the the most charming on screen personalities around in Sandra Bullock and Matt Damon, respectively. But that's where their similarities end. The films are more different than they are similar, and here are some reasons why.

Gravity takes place almost entirely in the vacuum of space. Bullock's character floats around from vessel to vessel, struggling to get a hold of anything that will help her in her quest to get back to Earth. The movie is big on spectacle, and really gave one the feeling of being in outer space, especially if viewed in IMAX and 3D. But The Martian takes place mostly on the surface of Mars. It's not the in-your-face showpiece that Gravity is because Mars doesn't look all that different from Earth. It looks like a desert, and in fact, most of The Martian was filmed in Jordan's Wadi Rum desert here on Earth.

Gravity basically only has two characters appear on-screen: those played by Bullock and George Clooney, and Clooney is barely in the movie. Now even though The Martian does feature a lot of Damon on his own, he's hardly the only star of the film. The Martian's cast is stacked with talent like Jessica Chastain, Kate Mara, Kristen Wiig, Donald Glover, Jeff Daniels, Chiwetel Ejiofor, Michael Peña, Sean Bean, and Sebastian Stan. Phew. That's a ridiculous cast, one that almost any other movie would kill for. So sorry, Bullock and Clooney, but there's no comparison here.

There is no rescue coming in Gravity. It's up to Bullock's character to find her way home or else die floating in space, and that is her only goal. The Martian, on the other hand, features a significant subplot involving a rescue mission to get Damon's character off of Mars. There's no way he can reach Earth from Mars on his own, so his goal is just to survive long enough for rescue to reach him. He's not pulling a Bullock and finding his way back to Earth, because it would be impossible.

While watching Gravity, my heart never slowed down enough to allow me to laugh at anything, as the movie was a constant barrage of breathtaking thrills. The Martian operates at a different speed, though, and manages to mix in plenty of jokes so the film doesn't get too bogged down with its science. While Gravity may have featured Bullock at her most serious, The Martian might be Damon's funniest role yet.

Gravity features an intense score and the chilling silence of space... and that's pretty much it. The Martian makes use of a banging disco soundtrack that becomes a running joke throughout the film. Come to think of it, Bullock probably couldn't have used some Bee Gees to lighten the mood a little.

Gravity takes place almost in real time, with the intended effect of making the viewer feel as if he or she is experiencing everything on-screen along with Bullock. But in The Martian, Damon is on Mars for years, which makes it an entirely different kind of movie. Gravity is a sprint, The Martian is a marathon.

It should be clear to you by now that Gravity and The Martian are two very different movies. I mean, it's not like they both feature Matt Damon stranded on a planet waiting for rescue or anything... damn it, Interstellar ...

More like this
Lisa Marie Presley Reviewed Baz Luhrmann’s ‘Elvis’ Movie On Twitter
By Grace Wehniainen
'Doctor Strange 2' Star Benedict Cumberbatch’s Net Worth Is Not An Illusion
By Hugh McIntyre
Watch The Dramatic First Trailer For Netflix's Jennifer Lopez Documentary
By Alyssa Lapid
What Does Doctor Strange’s Third Eye Mean?
By Arya Roshanian
Get Even More From Bustle — Sign Up For The Newsletter