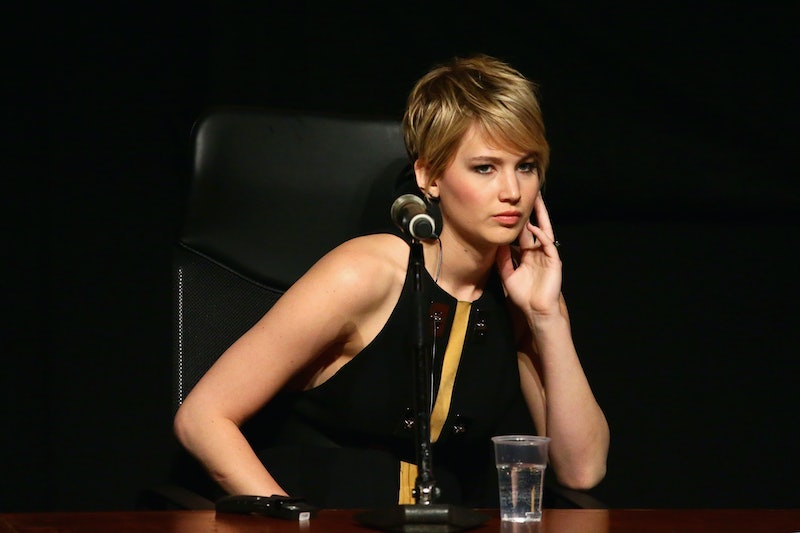 Just in case you had any doubts on the matter, Jennifer Lawrence is not a fan of Donald Trump. At a press junket with Entertainment Weekly for the impending release of The Hunger Games: Mockingjay — Part 2 , the subject of the upcoming presidential election came up. And Hollywood's sweetheart made her position abundantly clear: "If Donald Trump becomes president, that will be the end of the world." Did you hear that, America? Katniss Everdeen has spoken.

Lawrence's Hunger Games co-stars agree with her, even if they fall short of her eloquence. "I’ll back you up on that," said Liam Hemsworth with very Gale-like stoicism. "It’s a publicity stunt. It can’t be real," said Josh Hutcherson with very Peeta-like befuddlement. But J. Law wasn't done: "I genuinely believe that reality television has reached the ultimate place where now even things like this might just be for entertainment. It’s either that or it’s Hillary’s brilliant idea."

While the world waits to find out whether Trump's candidacy is actually just an elaborate hoax on Clinton's part, I can't help but wonder if Lawrence is perhaps so vociferously anti-Trump because the man reminds her somewhat of the tyrannical President Snow. The two men do have an awfully lot in common — and not just horrible fashion sense. So who would actually be the worse POTUS: Donald Trump or Coriolanus Snow? In their own words ...

"I'm putting the people on notice that are coming here from Syria as part of this mass migration: If I win, they're going back."

Yes, this is an actual sentence that was spoken by Trump. Out loud. Just this Wednesday, in fact.

"Hope. It’s the only thing stronger than fear. A little hope is effective. A lot of hope is dangerous. A spark is fine, as long as it’s contained."

Snow knows that with hope, as with the most delicious of foods, the key is moderation. No hope-addictions in Panem!

"[John McCain]'s not a war hero. He's a war hero because he was captured. I like people that weren't captured, OK, I hate to tell you."

Knowing that a high-profile feud is part and parcel of being a celebrity these days, Trump picked a fight with the former Republican presidential candidate who was held in a Vietnamese prison camp, where he was beaten and tortured for five years.

"Would you like to be in a real war? Imagine thousands of your people, dead. Your loved ones, gone."

All great leaders are obsessed with war, right? Snow has no problem threatening one that will inevitably result in the deaths of everyone Katniss cares about in order to keep her in line.

Trump claimed afterwards that he meant to finish this post-debate tirade with the word "nose." "Only a deviant would think anything else," his statement read.

"Her entire species must be eradicated."

Ah, yes. I love the smell of genocide in the morning.

"I would never give up my microphone. I thought that was disgusting. That showed such weakness, the way [Bernie Sanders] was taken away by two young women — the microphone; they just took the whole place over ... That will never happen with me."

How dare Sanders give a platform to protesters speaking out on behalf of an oppressed minority? How dare he??

"It's the things we love most that destroy us."

Snow knows that the key to an effective presidency is finding his citizen's weaknesses — and exploiting them. Trump's methods are somewhat similar, except replace the word "exploiting" with "firing."

Trump should just follow Snow's policy for dealing with undesirable people: Confine them to militarized districts and turn them into an oppressed labor force at the service of the pampered elite. Doesn't sound so far-fetched, does it?

Yep, that's Coriolanus Snow in a nutshell right there.

So which of them would make the worse President of the United States? Honestly, I think we've gotta call this one a draw.

More like this
Fans Of 'Anne With An E' Will Recognise 'Stranger Things’ Vickie Immediately
By Rachel Mantock
David Harbour Was Lily Allen’s First-Ever Date
By Frances Stewart
'Conversation With Friends' Star Alison Oliver Is Dating A 'Normal People' Alum
By Rachel Mantock
Oops! The 'Stranger Things' Monopoly Game Has Spoilers For Season 4
By Alyssa Lapid
Get Even More From Bustle — Sign Up For The Newsletter