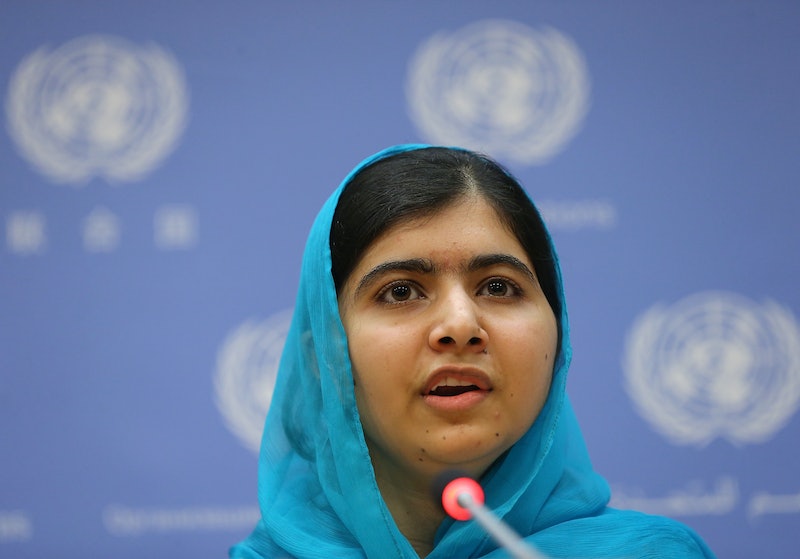 Malala Yousafzai became an education activist, Nobel Peace Prize winner, and international hero all before her 17th birthday. Now, after standing up against the Taliban for her right to go to school and recovering from the gunshot inflicted by the group, Yousafzai continues to spread her message by starring in the new documentary, He Named Me Malala . The movie, in theaters now, highlights all of Malala's biggest accomplishments to date, and tells the full story of the activist's life so far, including her early years.

Yousafzai was born in Pakistan in 1997, and was just another child going to school in Swat when the Taliban took over and started blocking girls from getting their education. The future icon responded by blogging about the threats to her education, an action that resulted in Taliban leaders declaring that she needed to be killed. Yousafzai survived an assassination attempt in 2012 after being shot in the head by the Taliban on her school bus. She and her family moved to the U.K., where she continued her schooling after her recovery, all while making a name for herself as an international advocate for women's education.

Clearly, Yousafzai has done a lot in her life, and though being the subject of a documentary at 18 would normally be exciting, to Malala Yousafzai, it's probably nothing compared to her other major accomplishments. Here are just some of the moments in which the teen proved herself to be nothing short of awe-inspiring.

When She Addressed The United Nations

In 2013, less than one year after she was shot by the Taliban, Yousafzai made her first appearance in front of the United Nations, where she gave a touching and inspiring speech. Her now-famous address served as a rousing call to arms for people all over the world to fight for every child's right to education."One child, one teacher, one book and one pen can change the world," she said.

When She Launched The Malala Fund

Yousafzai founded The Malala Fund in 2013 with the help of her father, Ziauddin Yousafzai. The organization was created to give girls a platform to speak their minds, and it has the goal of providing all female students with 12-year educations.

When She Appeared On The Daily Show

Yousafzai's interview with The Daily Show's Jon Stewart from October of 2013 is a must-watch. At just 16, she appeared on the late night show to promote The Malala Fund and her book, I Am Malala. The interview went viral and helped Yousafzai become a household name.

When She Stood Up To President Obama

Yousafzai doesn't back down, no even when face-to-face with Barack Obama. In 2013, Yousafzai met the President and the First Lady in what was likely meant to be a simple photo op and show of support for education. But Yousafzai took advantage of her meeting to confront Obama about his use of drone strikes, saying that they "are fueling terrorism." Yousafzai added that she wished that intervention abroad consisted more of educational efforts instead of stealth military missions. "Innocent victims are killed in these acts, and they lead to resentment among the Pakistani people. If we refocus efforts on education it will make a big impact," she said in a statement.

When She Won The Nobel Peace Prize

In 2014, Yousafzai was awarded the Nobel Peace Prize alongside fellow honoree, Kailash Satyarthi, for her work on behalf of children's rights and education. At 17, she was the youngest person to ever win the prize. "I am those 66 million girls who are deprived of education — and today I am not raising my voice, it is the voice of those 66 million girls," she said in her speech at the award ceremony.

When She Publicly Forgave The Men Who Shot Her

Yousafzai has frequently spoken out about the shooting, saying that she holds no ill will towards those who tried to hurt her. Instead, she has offered them her forgiveness. Recently, in an interview with Stephen Colbert on The Late Show, Yousafzai explained that her understanding comes from a place of optimism. "I think of the world as a happy place. And I believe that I should treat others the way I want to treat me. ...I want everyone to be kind to me, to love me, to take care of me, to forgive me if I do something bad. And that's what I have chosen in my mind: I have forgiven them," she said.

Looking over her many speeches and admirable accomplishments, it's easy to see Yousafzai as a super-human girl on a mission, but she is also just a teenager. And He Named Me Malala promises to explore even the most ordinary aspects of this extraordinary young woman to paint one full, incredible picture.