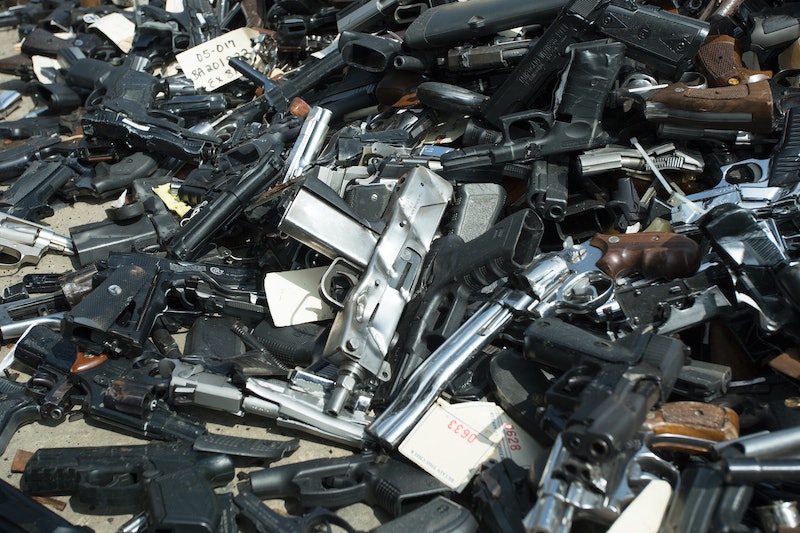 Following Thursday's tragic shooting at Umpqua Community College in Roseburg, Ore., which left as many as 10 people dead, the White House called for stricter gun control laws. During a press conference Thursday, White House press secretary Josh Earnest said that "the issue of sensible steps that can be taken to protect our communities from gun violence continues to be a top priority of this administration." Of course, Earnest's remarks were met with backlash from pro-gun Americans, who were quick to point out that the community college where the shooting took place was already a gun-free zone. But given the fact that this is the 45th reported school shooting in the United States this year, will gun control be a priority in the 2016 elections?

Democratic presidential hopeful Hillary Clinton, for example, has become more vocal about gun violence and tightening gun restrictions since she launched her campaign. In a July speech, Clinton said that "it is the height of irresponsibility not to talk about" gun violence. She has frequently called for stricter gun laws, and after Thursday's shooting in Oregon, she's likely to bring up the topic during the Democratic presidential debate this month. Similarly, 2016 presidential hopeful Sen. Bernie Sanders (I-Vt.) has said that he is in favor of "real, constructive gun control legislation," and he tweeted a message to that effect on Thursday, calling the Oregon shooting a "senseless tragedy." And in 2013, Lincoln Chafee signed a bill to ban semi-automatic assault weapons while he was governor of Rhode Island.

Among the 2016 Republican presidential hopefuls, meanwhile, there is less support for stricter gun control laws. Many of the GOP candidates have spoken out against any expansion of gun control in the country, with many speaking instead for protecting the Second Amendment.

While gun control wasn't a major issue in the 2008 presidential election — Business Insider notes that both Clinton and President Obama were discouraged from speaking about gun violence on the campaign trail — the dozens of school shootings in recent years suggest that the 2016 election season will be different. And a poll from the Pew Research Center, released in December, found that for the first time in more than 20 years, Americans' support for gun control outweighs their support for gun rights. If there was ever a time for change, the 2016 election season is it.