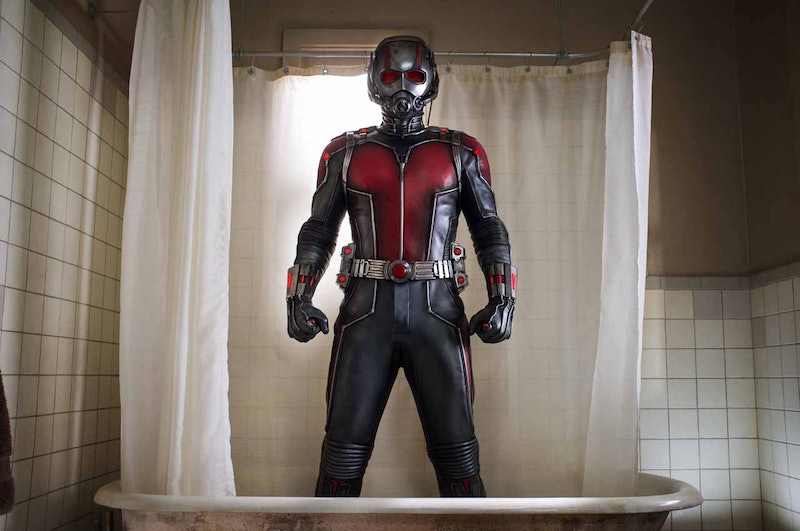 Ant-Man was one of the biggest movie surprises of the year, and it's no great mystery as to why. The film was shockingly original, very funny, and had dazzling special effects, and it all combined with leading man Paul Rudd's charisma to create one of the biggest hits of the summer. But the season is sadly over, and now that Ant-Man fans are stuck in the doldrums of autumn, there's only one thing that will brighten their days (besides PSLs): the thought of dressing up as Ant-Man for Halloween. So if you're wondering how you can make an Ant-Man Halloween costume this year, fear not: I've got you covered..........

For starters, it helps if you're a biker. When Scott Lang first finds the Ant-Man costume in the movie, he assumes that it's an old motorcycle outfit, and that's because it pretty much is. Form-fitting leather, a helmet, and some gloves are pretty much the standard attire of any serious rider, and those items form the basis of any quality Ant-Man costume. The drawback to going this route is that those things can be mighty expensive, so unless you have them lying around your house already, you may want to hit the nearest thrift shop and pop some tags. Or, if this sounds like too much work for you, you can always buy a ready-made Ant-Man costume at a store, like this one:

This costume goes for $50 at Party City, and it's completely serviceable for your Ant-Man costume needs. But if you get more joy out of creating your costume than picking one off a rack, then here's what you're going to need.

Try to find one with a good deal of red in it with a base color of navy or black. Having some padding that replicates musculature doesn't hurt, either. This example from Amazon is pretty close to perfect, and is currently on sale for $95. It's expensive, yes, so if you don't care about having a "real" motorcycle jacket, this cheaper one ($14-$40 on Amazon) might work well:

Having matching motorcycle pants is ideal as far as looks go, but if you're looking to save some money and increase your level of comfort, try a similarly-styled pair of athletic pants. This pair from Amazon should work well, and they're only $36.

Next, Grab A Helmet

Obviously, a helmet is key. You'll want one that has an area that covers your mouth as well, and most dirt bike helmets have this feature. They're also usually a little cheaper than motorcycle helmets; just make sure you get one with a removable visor like the above example from motomonster.com. It starts at $73.

And Pick Up Red Film

You're unlikely to find a helmet with Ant-Man's distinctive red-tinted visor, but you can make your own easily enough with some cello-sheets. These are just $9 on Amazon.

Back to the biker gear! Luckily, motorcycle gloves can be had for pretty cheap (this pair is $7 at Amazon). Look for a pair with some pizazz, and make sure they match the base color of your pants and jacket.

And Of Course, A Metallic Belt

Finding a metallic belt like Ant-Man's isn't that easy, but a stretchy metal plate belt like this example from Amazon should do the trick. It comes in silver and retails for $12, just make sure you add a little red via a round sticker.

Obviously the most fun aspect of the costume is your giant ant companion. This inflatable version from Amazon is around two feet long and comes in a set of five insects for $26. Just don't name it "Antony," OK?

An Ant-Man costume is definitely a lot of work, and potentially a lot of money, but it can also be a lot of fun. Of course, if it all ends up being too much, you can always just steal a costume from a super rich mad scientist and call it a day. Happy Halloween!