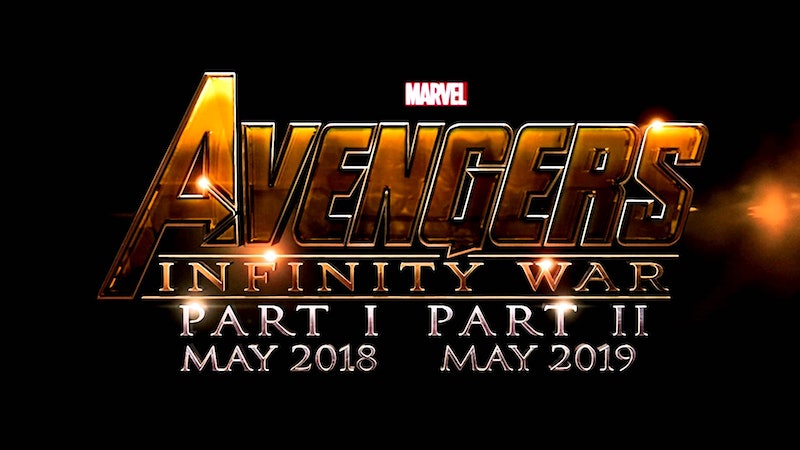 Is the end of Marvel's golden age fast approaching? That might be a stretch — but it looks like the Marvel movieverse as we all know it will change for good with the upcoming Avengers: Infinity War. Specifically: The final act of Phase Three will bring about the end of the current configuration of The Avengers and lead to a new era for the team and Marvel. In a Collider Q&A, Marvel studios exec Jeremy Latcham discussed how Avengers: Infinity War will change The Avengers forever.

"I think it definitely is an end to some version of the team that we’ve come to know as The Avengers," Latcham confirmed. "Who knows exactly what is going to happen yet in that film, but I think this version of that team — and I think we start to hint at it at the end of Age of Ultron — will be evolving."

Evolving may mean leaving certain fan favorites behind as contracts for some of Marvel's key players, like Robert Downey Jr., come up for re-negotiation. The buildup to the first Avengers film and then the second has been a ride full of amazing stories, and fans have certainly become attached to the current crew — even as they made room in their hearts for new characters. If the Infinity War means there are some characters set to leave the Marvel movieverse permanently, then this truly is the end of an era of superhero movie greatness.

So, what will The Avengers look like when the dust settles from the intergalactic battle set to rage when The Avengers: Infinity War Part One hits theaters in 2018? No one, not even Marvel, seems to be sure just yet — but a little speculation never hurt anyone. These are the characters I think are ready for retirement, and the ones who are ready to join the next class of Avengers.

Characters Who Are Ready To Be Benched

Trying to imagine the Marvel movieverse without Tony Stark is almost impossible, but as much as I love the man behind Iron Man, Tony is starting to wear down. He has been the linchpin for the universe for so long, it only feels right to say goodbye to him (at least for awhile) as Marvel enters a new chapter.

Post-Infinity War, Thor is also a good candidate for benching, and it would be fun to see Chris Evans hand the Cap moniker over to another character.

I know these three characters are beloved, but they've all had multiple movies with more to come. With a vast comic book universe to draw on, all three could take a breather and let new characters worry about saving the world. As an added bonus, Chris Evans, Chris Hemsworth, and Robert Downey Jr. would all be freed up to tackle more original movies. It's a win-win — especially since their journeys will all be thoroughly told by the time the second part of Infinity War concludes.

Characters Who Need To Stick Around

Marvel still owes the world a good Hulk solo film, and if Black Widow never gets her own movie, there will be rioting. These two characters still have a lot of miles left in them because they have spent so much time supporting other character's stories. If Marvel is willing to course correct a bit on Hawkeye and make him more like his comic book persona, then I would love to see Jeremy Renner carry a Hawkeye solo outing too.

Then there are the second tier sidekick characters — Bucky, Falcon, War Machine — all of whom could step into more substantial roles. Bucky is my first pick for the next Cap, not only because it is part of the comic book canon, but because he is a fantastic character who is due for a redemption arc.

Who Should Lead The Next Team Of Avengers

I am beyond ready to meet Ms. Marvel and she is my current pick for the next leader of the Avengers. Carol Danvers is a powerful, dynamic character who would be the perfect successor to Captain America. Under her lead, I feel like The Avengers could be a more diverse group of heroes. Black Panther is certain to be on the team, Scarlet Witch still has plenty of story to tell, and I would not argue if Rocket Raccoon decided to spend some time Earth side. Star Lord, Ant-Man, and Hope Van Dyne are all characters the world needs more of as well.

The next team of Avengers needs to feel fresh and unexpected, and if Carol leads the charge I see no reason why that can't happen.

The Inhumans is set to mark the end of Phase Three and form a bridge to Phase Four. That can only mean one thing: Marvel is about to embrace its weird side. While they can't use the word "mutants," by introducing Inhumans into the movieverse, Marvel is giving itself a chance to be as imaginative and offbeat as it wants. Guardians of the Galaxy already proved weird looks good on Marvel, and I want more of that. Give me more space adventures, give me Planet Hulk, give me heroes with innate powers they don't fully understand — Marvel's next phase should expand the universe beyond New York, Los Angeles, and Asgard into the unknown.

Why Loki Needs To Stay Put

One thing needs to stay the same throughout all of these upcoming changes: Loki. Marvel has yet to introduce another villain as enduring or interesting as Loki. Even if Thor takes a time-out (and maybe makes room for the female Thor), Loki needs to remain a part of the Marvel universe in some capacity — villian, antihero — it doesn't matter as long as he stays put. Loki is a rich character who is not done causing mischief. No matter what the Avengers look like in four years, I hope Loki is still around to cause them trouble. Until Marvel can come up with a villian to match Loki in complexity, the studio needs to do everything they can to hold on to Tom Hiddleston.

Phase Four is going to bring about a whole new world for Marvel. Some of the key heroes may even die. Whatever happens, as long as Marvel continues to bring interesting heroes to life, I'm sure the movieverse will keep on offering the best superhero movies in the business — with or without Iron Man, Captain America, and Thor.

More like this
One Powerful Quote In 'Doctor Strange 2' Is Going Viral On Twitter
By Alyssa Lapid
Who Are The 6 Illuminati Heroes in 'Doctor Strange 2'?
By Grace Wehniainen
The 'Hocus Pocus' Sequel Finally Has A Release Date & It Makes Total Sense
By Shannon Barbour and Radhika Menon
What Does Doctor Strange’s Third Eye Mean?
By Arya Roshanian
Get Even More From Bustle — Sign Up For The Newsletter