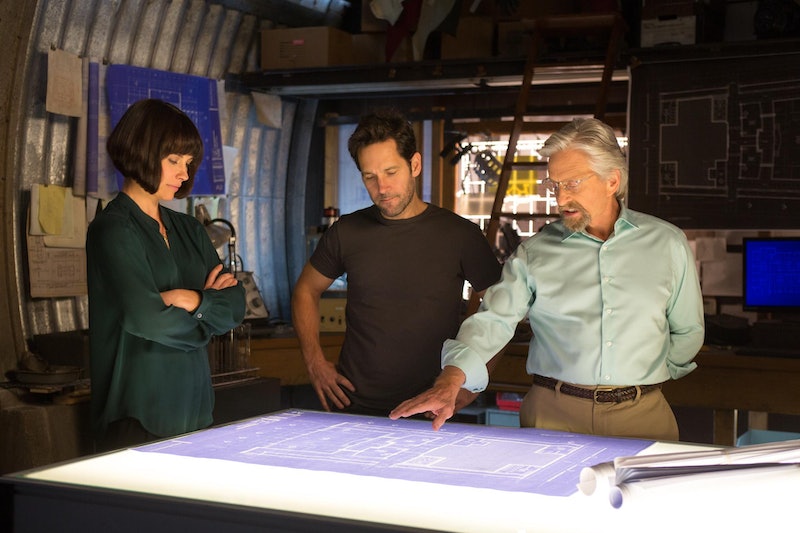 Last month after the world premiere of Ant-Man , the newest entry in the Marvel Cinematic Universe, Guardians Of The Galaxy director James Gunn took to Facebook to lavish praise upon the superhero film: "Ant-Man may just be my favorite Marvel film since Jon Favreau's Iron Man," Gunn said. High praise for a franchise that includes critically-acclaimed commercial successes like The Avengers, Captain America: The Winter Soldier, and Guardians. "Well, maybe excluding one film to which I'm partial," he amended, clearly referring to Guardians of the Galaxy. (Touché.) He called the film "hilarious and warm" as well as "deft and nimble and joyful." Now that Ant-Man is about to open this Friday, we finally know more about why Gunn must have loved the movie so damn much.

In an interview with Vulture, Ant-Man director Peyton Reed reflected on Gunn's effusive praise: "I saw James at the after-party and he said, 'Oh my God!' — but I don't always trust what people say at those parties. They'll say, 'Oh yeah, it was great,' but it's a completely untrustworthy environment! Then when he tweeted and he wrote his Facebook post, I almost started crying. I'm such a huge fan of James and of Guardians, so to read that was so incredibly nice and meaningful to me. It's rare in Hollywood that directors actually get to interact with each other, and that's one of the coolest things about Marvel, to walk down the hall and it's like, 'Oh, there's Scott Derrickson, going off to do Doctor Strange! Let's talk about it.'"

As told by Reed throughout the interview, here are a few reasons why Gunn — and pretty much every other critic in the world — fell in love with the miniaturized charm of Ant-Man:

It's Got An Exciting Female Character

As overstuffed as the MCU is with superheroes and villains and magical MacGuffins, the one thing that it's sorely lacking are complex female characters. Scarlett Johansson's Black Widow has pretty much had to single-handedly fill that role for the franchise thus far. Gwyneth Paltrow was perfectly cast as Pepper Potts, but her job description was basically, "Have chemistry with Robert Downey, Jr." And don't get me started on Natalie Portman's bland Jane Foster. But Reed is excited to offer an exciting female character in Hope Van Dyne, played by The Hobbit's Evangeline Lilly.

Reed apparently "beefed up" her role in the film after taking over the director's chair from Edgar Wright. "There's so much stuff that's being written in the geek press asking where the female heroes are, and it's a legitimate question," he said. "Something Evangeline and I talked a lot about, and that Marvel was totally supportive of, is that Hope's arc is every bit as important as Scott's arc." Is Ant-Man about to pull a Fury Road on us?

It's Got Adorable Ants

Ants are probably not anyone's favorite species in the animal kingdom. Personally I think they're leagues better than spiders or centipedes, but they're still not my idea of a compelling, relatable sidekick. Reed worked hard to change that, as he told Vulture: "It was something we talked about a lot, de-grossing them and making them palatable." This was a command that came down from on high, as it turns out that Marvel Studios president Kevin Feige thinks ants are "gross" and "disgusting." "During visual-effects and character design, we really were trying to give them enough recognizable characteristics while de-emphasizing other things, like the fact that real ants have a lot of hair and a lot of spikes." I'm sure audiences everywhere will thank him for the lack of spikes when they don their 3D glasses this weekend.

It's Got Michael Douglas

The MCU is no stranger to pedigreed actors, recruiting everyone from Jeff Bridges to Anthony Hopkins, from Glenn Close to Tilda Swinton. But it still seemed like a major coup when it was announced that Douglas had been cast in the role of the original Ant-Man himself, Hank Pym — in the comics, a founding member of The Avengers and the creator of Ultron. As he told Vulture, Reed doesn't have enough great things to say about the legendary actor's involvement in his film: "The fact that he wanted to do this kind of movie and embraced it without looking down on it was amazing." And it doesn't sound like Douglas simply clocked in and recited his lines when prompted, either: "Michael's also an Oscar-winning producer, and I think it was cool for him to immerse himself in this process."

Many MCU fans worried that, when original director Wright departed the project, it signaled that the studio wasn't open to a unique creative vision, preferring for the films to be cranked out in their pre-established mold. But Reed insisted to Vulture, that Feige & Co. were completely open to experimentation: "I wanted it to be fluid and I wanted Marvel to be open to weird things, but I didn't know if they would [be] because these are gigantic, expensive movies. I was thrilled to find out that they crave weird and different." He then lobbed the praise right back at Gunn, crediting his film with paving the way for Ant-Man: "I think Guardians gave them this extra level of confidence that they can be eccentric, and that their movies can be absolutely comedic but still deliver on the stakes and the action and the stuff that these movies require.

It Sets Up For Civil War

For a while, it was unclear if star Paul Rudd would be reprising the role of Scott Lang beyond his own solo movie. Thankfully, it was confirmed in May that Rudd would be appearing in 2016's Captain America: Civil War along with, well, pretty much everyone else in the Marvel Cinematic Universe. As Reed told Vulture, is a tiny bit jealous of his leading man's graduation into the big leagues: "It's like your girlfriend broke up with you and now she's going out with this very high-profile guy." The director remembers the phone call when Rudd told him the good news. "He was like a kid, man. I told him, 'That's awesome,' and when I got off the phone I was like, 'Dammit.'"

Reed shouldn't worry too much. If Ant-Man is the giant-sized success it appears poised to be, he should be graduating to the big leagues himself before he can say "Pym Particle."

More like this
A New Princess Diana Documentary Tells Her Story Like Never Been Told Before
By Frances Stewart
Everything To Know About The Musical 'Joker' Sequel – & Lady Gaga’s Role
By El Hunt and Sam Ramsden
Stephen Graham’s Wife Plays A Vital Role In His Career
By Emma Madden and Sophie McEvoy
Every Horror Movie Reference In The 'PLL: Original Sin' Premiere
By Alyssa Lapid
Get Even More From Bustle — Sign Up For The Newsletter