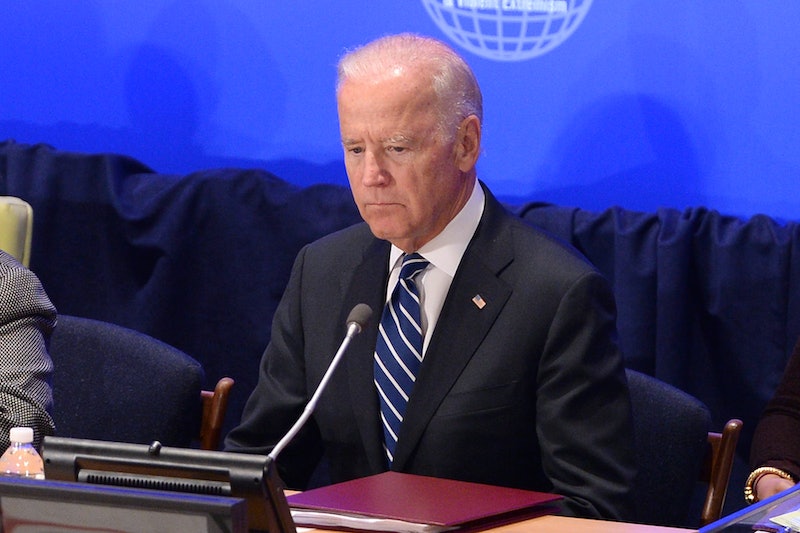 During the fifth annual Concordia Summit, which brings together business and government leaders from around the world, Vice President Joe Biden addressed the Umpqua Community College shooting. And his speech included a reference to his son that will absolutely break the heart of anyone who reads it. A mass shooting on the college campus late morning Thursday left at least 10 people dead, including the shooter, and seven injured. Biden lost his son Beau to cancer earlier this year, and he lost his first wife and infant daughter in a car crash decades ago.

Biden started his speech by bringing attention to the shooting, as well as his own personal ties to the situation. He echoed President Obama's earlier statement that this kind of tragedy is becoming all too common in our country. Both Biden and Obama talked about the need for stronger gun control in the wake of the multiple devastating shootings that have occurred over the past few years, and about how there is actually support for more stringent legislation — background checks, etc. — yet a minority against it was able to prevent such laws from passing.

The speech was moving, but whether Biden or Obama or anyone's comments will be enough to actually implement change feels a bit hopeless right now. Read the transcript of what Biden said below.

As many of you have probably heard, there was another shooting today at a community college in rural Oregon. I don’t have the details yet, but unfortunately, this has been happening far too often, the estimates are somewhere between 10 and 13 dead students, and somewhere between 15-25 additional seriously wounded.

I want to say at the outset here, as you all know, there’s nothing … worse than getting that phone call saying that your child is gone. Your child is gone. Or your brother, your sister. Your husband, your wife. And folks, part of the dysfunction of our political system today is that there is an overwhelming consensus in America on two things that are equally defensible: the Second Amendment and sane gun legislation relating to background checks and the ability to … The Second Amendment doesn’t say you can own a bazooka, it doesn’t say you can own an F15 with hellfire missiles. There’s the ability of the government to limit the type of weapon that is available.

And although we don’t have enough information now for me to comment on the specifics, my guess is, I’m prepared to bet you, that it was a semi-automatic or an automatic weapon. I don’t know that yet, but that’ll be my guess. For so many people to be shot in such a short amount of time. We’re basically the only civilized country in the world where we have these massive murders in our country. Eighty-seven percent of the American people agree with the proposal I put together for the president on background checks and gun safety. Even over 60 percent of NRA families support it. So folks, I cite that as part of the dysfunction because we are able to have decided minorities prevent consensus from occurring.

Which doesn’t directly lead into what we’re talking about today, but because my wife … teaches for a full-time job for the last seven years, she teaches 15 credits, she has her master’s and a doctorate. She teaches at a community college. It brings home every time something happens in a school just how … The safest place on earth should be our school and colleges. But that’s for another day.

So my thoughts and prayers, I’m sure along with yours, are with the families who lost folks today.