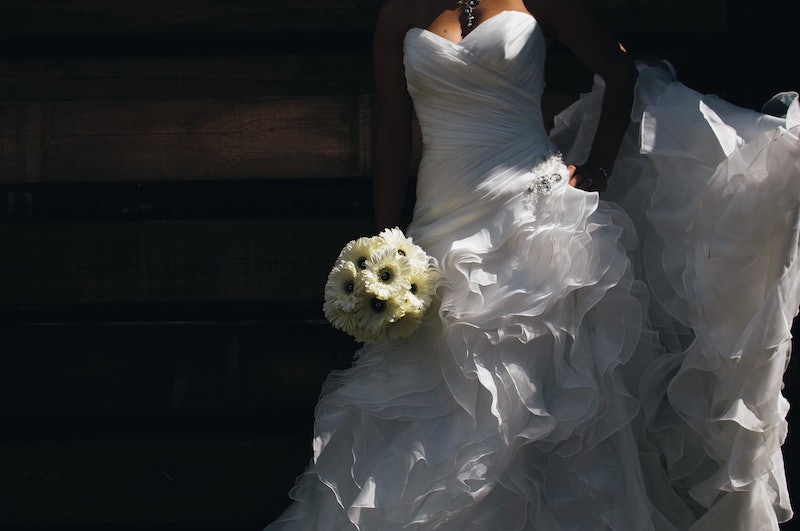 Anyone who has ever been involved in organizing a wedding knows that it involves a lot of planning. A lot of planning. There is so much to coordinate and deal with — from crazy relatives to contend with to seating arrangements that will never please everyone — that folks planning a wedding may start to wonder whether eloping to Vegas is actually that bad an idea. Taking care to include the kind of wedding traditions that your family or community thinks are important is usually a big part of wedding planning, too — and that remains true almost anywhere you go. The five examples below are just a handful of the wedding traditions around the world that brides and grooms in other countries often integrate into their ceremonies.

Though some of these wedding traditions might initially strike you as offbeat, remember that every culture has their own wedding traditions and superstitions that don't make a whole lot of sense, if you think about them. I mean, is it actually bad luck for a couple to see each other before walking down the aisle? And is the marriage really doomed if the bride just doesn't feel like donning something old, new, borrowed and blue on her big day? Yeah, probably not. Often, whether we perceive something as "normal" or "not weird" is just a matter of our having been exposed to it before.

So as you read the following traditions, keep in mind that they're not unusual to the people who use them to celebrate their marriages — and it might also help to remember that people all over the world are probably saying "what the heck?" about our own U.S. wedding customs.

Polterabend is a German tradition that involves shattering a whole lot of dishes. If you don't happen to be the bride or the groom, don't worry — you still get to join in the fun. In fact, it's so informal that any and all friends are welcome to show up and smash some ceramics. It typically takes place in front of the bride's home on the Friday before the wedding, and guests come armed with plenty of porcelain, ceramics and tin cans. The items are thrown onto the ground and smashed, then the guests get to go home while the couple cleans up — a symbol of the fact that they'll be together through good times and bad. More recently, it's become common to have the smashing occur at the wedding itself — in which case, I really hope the staff at the venue are given a major tip.

Although the exact origins of polterabend are unknown, some believe that the smashing ceremony was originally intended to ward off evil spirits. Another theory is that the tradition was formed so that men who desired the bride would have an opportunity to vent their anger before watching her marry someone else. Either way, the practice has survived through the present day.

In Sweden, the groom isn't the only one who gets to kiss the bridge on their wedding day — and vice versa. In a tradition known as the kissing feast, every time the bride or groom leaves the room, the attendees line up to kiss their better half. If you're the jealous type, this is probably wouldn't be the highlight of your wedding day. But if you're a guest at the wedding... well, the kissing feast may be almost as fun as the open bar.

In certain areas of India, a groom must take off his shoes before he heads to the altar to say "I do." At that time, it's up to the bride's family and friends to steal and hide his shoes while the groom's family attempts to protect them. It's a fun way to involve all the guests and sometimes there's even ransom involved.

In China, a groom must often contend with the bridesmaid blockade before he's allowed to finally tie the knot. The bridesmaids playfully demand his money and force him to sing and perform an assortment of ridiculous tasks before letting him through. This one sounds like a party if you're a bridesmaid, but potentially pretty stressful for the groom. But it's not just a bunch of random hassling — this tradition is meant to prove to the bridesmaids that the groom truly loves their friend enough to deserve to be married to her. And when your partner is willing to be totally humiliated in front of your friends? It must be true love.

If you play matchmaker in Ukraine, don't expect a huge "thank you!" shout-out at the wedding ceremony. Nope, instead you'll be honored with a burning effigy of yourself. The couple-to-be engages in some arts and crafts before their wedding day — namely, they create a straw dummy of the individual who introduced them. It's believed that burning it on the wedding day will prevent a nasty divorce. How's that for a thank you?!

So if you're in the midst of planning your own wedding or helping a friend plan theirs... consider incorporating some of these traditions to make it a day no one will forget — for better or worse (pun intended).