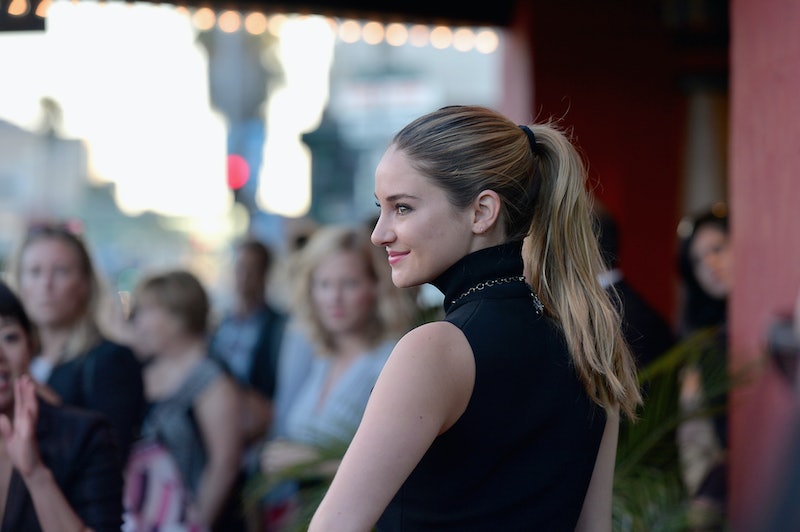 The last time a tagline was this controversial, it was 2008, and "why so serious?" was eliciting opinions from across the globe. The tagline for the upcoming movie adaptation of The Fault in our Stars , the bestselling John Green novel about sick teens in love, may not be quite as ominous as the one for The Dark Knight, but it's already proving just as contentious. When the first poster for the film was released in mid-December, practically everyone with Internet access had something to say about it, all because of four little words: "One sick love story." The tagline, which some deemed as darkly fitting while others called it glib, became the subject of massive debate. Fans, film writers, and even the book's author, Green, chiming in with their thoughts on the poster's word choice. The latest person to join the conversation? In an interview with Entertainment Weekly, Shailene Woodley said that the tagline is "not something I would have chosen."

Woodley went on to say that she "had a really strong response" to the tagline, and fell into the camp of people who would've liked the film's producers to pick a different statement to adorn the movie's poster.

"I think that there’s so many people who are so passionate about this book that there’s nothing that will ever satisfy everyone," Woodley said. "So I think it was just up to the discretion of the marketing mavens. For me, it was — yeah, not something I would have chosen."

For most movies, a star criticizing an aspect of the film half a year before it's even released would be a very bad sign about the quality of the film, but for The Fault in our Stars, it means something entirely different. Like practically everyone else in the universe, Woodley is a fan of the book, and so she has opinions about its film adaptation. Her criticism of the tagline just means that she cares about the movie, because, like all of us, she's deeply invested in the love story of Hazel and Augustus. Her opinion on the tagline is not a bad omen for the film, or a reveal of what Woodley truly thinks about the movie; all it proves is that she cares.

Woodley's emotional connection to the book, which is shared by her co-stars, the filmmakers, and countless readers and critics, is what makes The Fault in Our Stars so special. So many people feel invested in the movie, whether they have a role in its making or not, because the book that it's based on holds such an important place in their hearts. We all want the movie to be as good as the book, and the fact that something as a minor as the tagline is getting us worked up just proves how much we care.

So to anyone who hated the tagline and is worried about the quality of the movie: don't be. With as many passionate, opinionated people working to make the TFIOS adaptation as incredible as there are, there's no doubt in our minds that The Fault in our Stars movie will live up to our (insanely high) expectations.