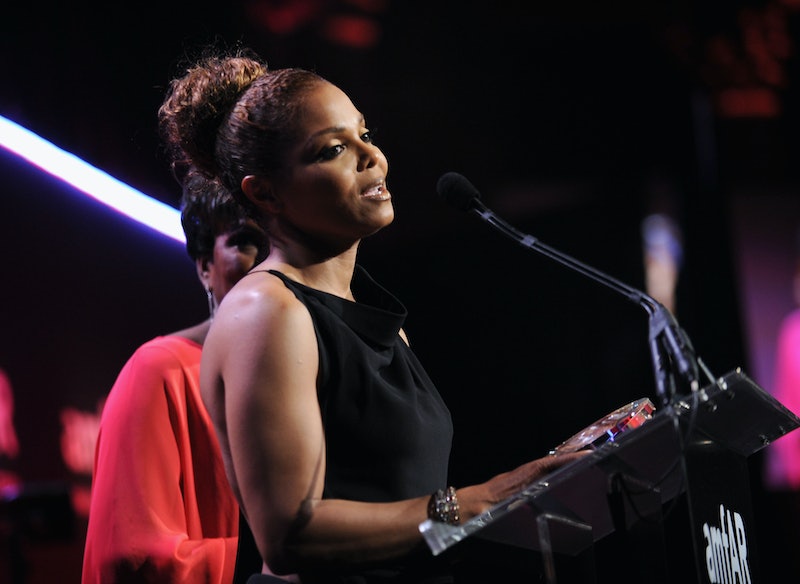 Unbreakable has broken onto the Internet. Friday afternoon Janet Jackson released her album Unbreakable, and made it available for streaming on Spotify. Amongst the slew of new tracks, there is the full version of the previously teased song "The Great Forever." Early on there was buzz that "The Great Forever" sounded like Michael Jackson (you know, the late great King of Pop and her brother). But, on its own merits, what exactly is this song about? From my expert analysis, it seems to be something like magazines, heaven, and — wait. Could it be that there is a Beyoncé reference on "The Great Forever?"

Hold on, hold on, just hear me out for a moment. We all know that Beyoncé probably takes at least some inspiration from Jackson when it comes to her musical style — or at least owes her a lot. And, while Jackson and Beyoncé may have allegedly feuded in the past, it's all water under the bridge now, especially since Beyoncé dressed up as Jackson for Halloween 2014. That's why I don't think it's out of the realm of imagination to think that a certain moment in the bridge of "The Great Forever" was a secret reference to Beyoncé's "Partition."

During the bridge of the song, you can clearly hear someone sneeze on the beat, to which Jackson replies, "bless you." Meanwhile, in Beyonce's "Partition," the pop star has a lyric that goes, "I sneezed on the beat and the beat got sicker." So how does that fit in here? Is that a playful reference? Is Jackson trying to assert her dominance by proving she too can sneeze on a beat? Is Beyonce God? Is it all of the above?

Whether you agree that the moment was a wink wink-nudge nudge reference or not, "The Great Forever's" lyrics are worth looking over, and I think I'm qualified enough (see: I have Internet access) to be the one to analyze it. So take my hand and join me as we do a double take on some of the lyrics. For example, we dive into the song with Jackson being decidedly not amused.

So if I was Janet Jackson (spoiler alert, I'm not), what would this be referring to? Specifically my thoughts turn to entire idea of fame and being scrutinized by the media. Jackson is someone who was practically born in the spotlight, molded by it (like the reverse of Bane from Batman). She is no stranger to tabloids churning up silly rumors, like being on the brink of divorce or that she has a secret daughter from her marriage with James DeBarge. She wants to know where you're getting your facts, first of all, and she really just wants to just be herself and not worry about incredulous lies staring at her while she's in line at the super market. Um, you know, if she actually waits in line at the super market.

Here Jackson is saying that what other people think doesn't matter to her, shocking as it may seem. I'm a little bit perplexed, because she seemed a little miffed earlier. Maybe, in her case, it's a matter of "It's annoying that the media fabricates these stories about me, but I know who I am and I love who I am." It's like finding out that someone you dated is going around saying you're "crazy" because you texted him first four times in one week. It's annoying to find out, because you feel like your reputation gets weakened as a result, but at the end of the day you maintain that that's a perfectly acceptable amount of times to text someone you're dating. Even if you are crazy, that isn't the reason why.

...it's exactly like that. Anyway, we get to the chorus, right?

So, she's living her life in a way that feels honest, good, and probably sans a secret daughter. What could "The Great Forever" possibly be? I would say it's some euphemism for heaven, but I don't know if it's literally that. Jackson and her siblings were all raised as Jehovah's Witnesses, but she regards herself more as "spiritual" than anything else. "The Great Forever" probably refers to some sort of nebulous heaven-like place. Maybe the lyrics that follow will elaborate?

Update: "Forever is the truth." To be spiritual, in sense, has you deal with the core concepts of most organized religious in more vague terms. So, again, if I were Jackson (I'm still not) I would say that she believes that the way she's living her life will lead her onto a happier, higher plane of existence. Then we get to the second verse...

If you wrong would you admit it?And take the heat up under the lightsUse your expert criticismThen maybe you could get a lifeDon’t like seeing people happyIs it jealousy or personal?Cause I don’t see why loving someoneOr what I do seem so radical to you

OK, so now this feels more like a personal vendetta, although I'm not sure exactly who she's calling out. But clearly there's someone who is smack talking Ms. Jackson, and whether it's a person and publication she is not pleased (even though she said she didn't care earlier). Hm... let's look at the bridge break.

So, this implies that once you know your purpose in life you become less bitter and get filled with love. Obviously, it says it a lot better than I do. With a possible reference to Beyoncé slipped in there. See how I worked my way back to that?

I'm not 100 percent sure if Beyoncé had some slight influence on this song, or even if this lyrical analysis is an accurate reflection of everything going through Jackson's mind. But I do know that Jackson's album is definitely worth a listen to, and you should get to streaming it right away so you can decrypt these lyrics yourself.