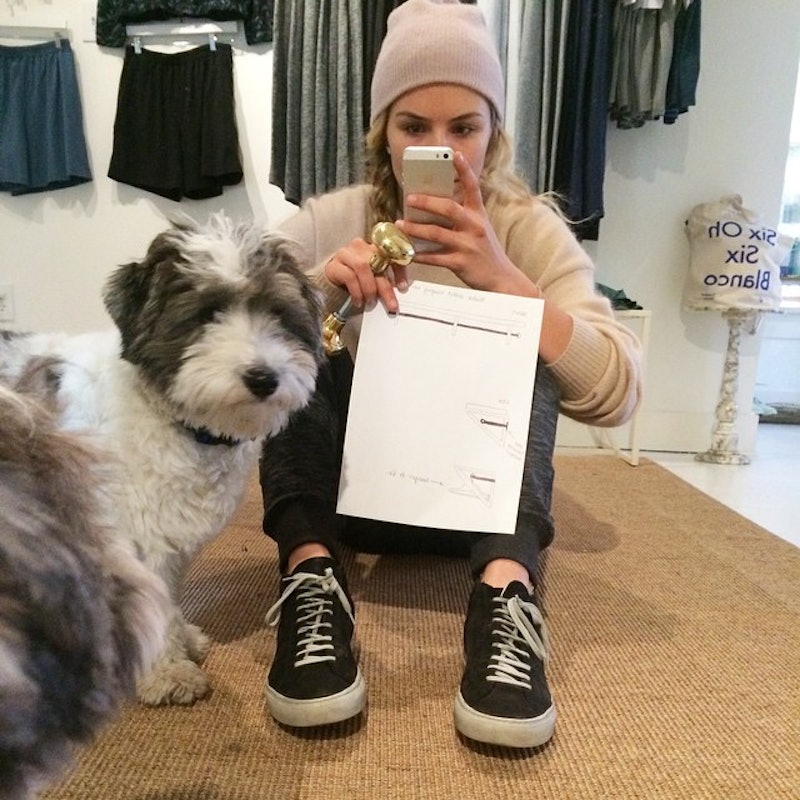 Activewear line Outdoor Voices has been on the rise for the past several months. Stars like Lena Dunham and fashion heavy hitters like Leandra Medine have all worn or collaborated with the brand, but that's not even the label's coolest aspect. According to AOL, Outdoor Voices' CEO Tyler Haney is only 26 years old, but despite her young age, she is a total #girlboss. While Haney may be young, her accomplishments are those of a much older designer, and it's so cool to celebrate young talent, drive, and success.

The Outdoor Voices brand began in 2012 and since its inception has been the hipper version of other major athletic wear brands. According to AOL, the brand is being referred to as "Lululemon for hispters," and it's definitely true that the brand embraces less stylized — but still stylish — marketing more geared towards the millennial generation. Nothing could be further proof of this than when Lena Dunham rocked Outdoor Voices on her New York City run a couple months ago. To add fuel to the idea that Outdoor Voices may be a more millennial accessible line, Leandra Medine designed her own workout kit that was sold in limited quantities on the brand's website. It appears as if Haney has used her age to her advantage when amassing a growing number of young fans.

Haney's success came with no prior experience — though she did attend Parsons School of Art and Design — but that didn't stop her from creating the ultra chic line. In an interview with Marie Claire , Haney explained how her active upbringing in Colorado influenced her vision for Outdoor Voices. She explained:

There's no real separation between your active life and your life-life. That's a big part of our creative approach. I grew up super active, running hurdles and playing basketball. When I was in high school I was wearing brands like Nike and Under Armour that definitely give you the feeling that you need to be bigger, better, faster, stronger. As I graduated out of that phase and realized I wasn't going to be a professional athlete, I wanted brands that embodied a bit more of a balance between being feminine and athletic. I didn't feel like there was a brand that embodied that yet. That was the initial feeling that I wanted to create a brand around.

The young designer's approach is a new one but totally embraces the ultra popular athlesiure trend that's rampant on today's streets. There truly doesn't seem to be a divide in every day wear and active wear any longer.

The young designer also spoke about the way her lack of experience shapes her approach to the business. At 26, this is Haney's first foray into the business world, but she's obviously not afraid of that. She told the magazine, "Not having the experience, you have to very much convince people right off the bat that they want to be a part of your company. So enthusiasm has to be high and being very articulate and confident in what we're doing. Just so you're making a very clear vision. And I've found that as I've tightened that up, I'm getting better and better people to join the team."

Haney's work is inspiring, and I can't get enough of young people building their brands because of hard work. However, the Outdoor Voices founder is one in a list of many more young, successful fashion stars.

These young sisters are 28 and 30 respectively and are the brains behind Building Block, a line known for incredible, minimalist handbags.

The genius of the year award goes to Grace Choi — age 30 — of Mink who created the 3D makeup printer. Yes, seriously.

These young sisters' — who are 26 and 27 — swimwear line is gorgeous and was given special attention in Sports Illustrated in 2011, which means they were even younger than they are now!

Alison Chemla's emoticon jewelry is a super fun, tongue-n-cheek line that has already been worn by megastars like Rihanna, and the designer is only 27!

More like this
What’s The Kibbe Body Type Test That’s All Over TikTok?
By Marilyn La Jeunesse
'The Circle' Season 4 Star Yu Ling Wu Is Already A Beauty Icon
By Erin Stovall
10 Nail Trends That Perfectly Capture The Early 2000s
By Paris Giles
Ed Hardy-Inspired Cross Nail Designs Are Majorly Trending
By Danielle Sinay
Get Even More From Bustle — Sign Up For The Newsletter