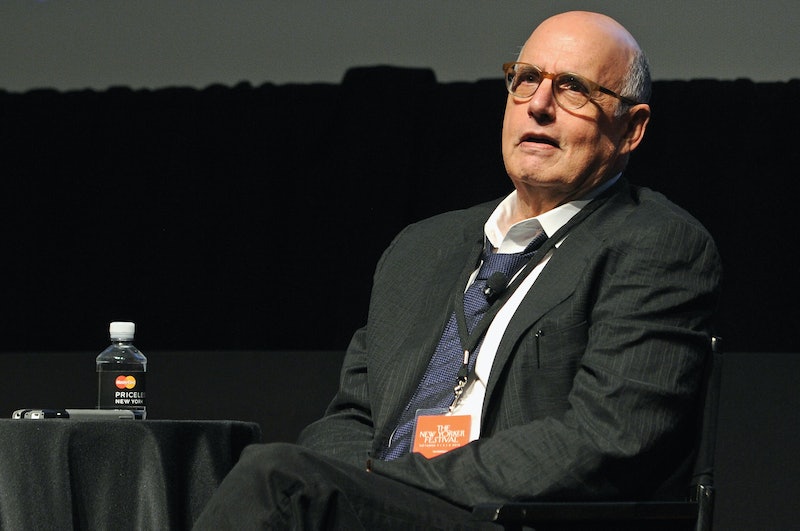 Jeffrey Tambor has been receiving a lot of well-deserved recognition. In September, he won an Emmy for Outstanding Lead Actor in a Comedy Series for his role as Maura Pfefferman on Amazon's Transparent. This win was preceded by Tambor's 2015 Golden Globe Awards victory, where he took home the award for Best Actor in a TV Series. Tambor has been lauded by critics and fans alike for his raw, poignant portrayal of Maura, a character who navigates her way through coming out to her family and friends as transgender, along with acclimating to a new life as her most authentic self. There is no doubt that Tambor's performance has deserved all the many accolades it has received — but what further cements Tambor the actor as such a pivotal voice in the transgender community is the consistent humility he has displayed, and the fact that he has used his success as a vehicle for progress.

He dedicated both his Emmy and Golden Globe to the transgender community, thanking the members for their support and "allowing us to be part of the change." On Saturday, Tambor attended The New Yorker Festival 2015, and sat down with New Yorker staff writer, Ariel Levy, to discuss his experience — and honor — to be a cisgender man playing the role of a transgender woman.

I say every chance I can that Jill Soloway, the creator of our show, changed my life with the great role of Maura Pfefferman, but also the great responsibility of Maura Pfefferman. There's not a day that doesn't go by that I don't feel the great responsibility of playing that role, not only for the eight Rotten Tomatoes or the nine thumbs up or whatever culture we're in, but also because I want to do it right. Because, as I say, lives are at stake. And I know that sounds glib and I know that sounds sound bite-y and everything, but there's not a day that doesn't go by that you don't look at the news — lives are at stake, so thats what weights on me. And I get a good reaction from the community and a healthy reaction. As I said in the [Emmys] speech, I am so honored to be part of the change. The world needs to change and to be part of this... I'm a cisgender male and I've been given the role of a lifetime as a transgender woman, so it doesn't get better than this.

Tambor's words showcase what it truly means to be an ally in the transgender community — and why being such an ally is integral to the issues that transgender individuals continue to face. According to stats reported by the Los Angeles Times, over 40 percent of "transgender or gender-nonconforming have attempted suicide sometime in their lives, nearly nine times the national average." The Transparent star has both recognized the severity of this, while also spotlighting how his opportunity to share a story that is relatable to so many is a true privilege.

"I guess what people want me to say is that I got to access more of my femininity, but I sort of reject that," he said of playing Maura. "What I like to say is that I got — for the first time ever — to use all of Jeffery Tambor in a role." The actor went on to note — as he has in the past — that the role is "over and above me" when discussing others in the transgender community who tell him their stories.

I'm telling you my life is so amazing that way. There is something — oh, I'm getting emotional — about this role that is over and above me that is speaking to people. And it's not my creation. It's what I represent. Maura Pfefferman represents all the people who have been other-ized in their lives and people get into that.

Tambor also recalled a time his daughter visited him on set, and used the opportunity to speak on how prejudice is a learned behavior.

Evie came to the set, I went, 'Hmm...umm...Daddy, um, is playing...hmm...' And she said, 'Daddy, I understand, your character's more comfortable being a woman.' That's 8 1/2 years old. So kids, they get it. Prejudice and all that nonsense is learned.

The past year has seen some truly heartening progress for the transgender community. Through his onscreen portrayal of Maura and offscreen discussions, Tambor has secured himself — albeit, very humbly — as one to be admired both for his talent and his earnest dedication to the individuals Transparent has been inspired by.