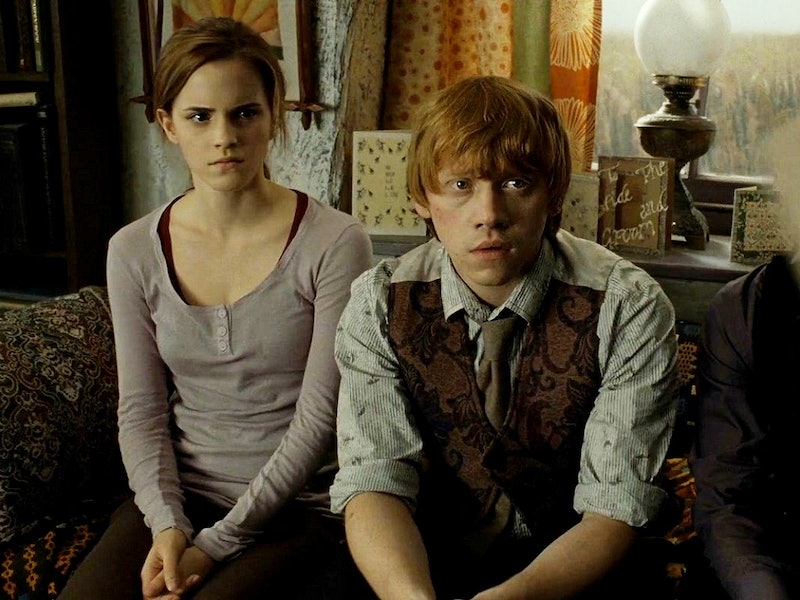 Dating is hard — like the third task of the Tri-Wizard Tournament hard. And while that might be because these days, everyone has a never ending list of deal breakers, Harry Potter fans definitely have it worst. In addition to having spectacular literary taste, lovers of J.K. Rowling's series can be the pickiest daters in the bunch. The reason why makes sense; the series contains plenty of ideal depictions of true love, so Harry Potter fans expect the same level of excellence in their personal lives.

Personally, I dream of finding my own version of Mr. Weasley; I love his charm and everyman quality. But there are times when I dream of Cedric Diggory (R.I.P.). And then again, who wouldn't want to date a Tonks, someone who can look past a person's shortcomings to love the person underneath? There are a million examples of grade-A dating material in the Potter books, but frankly, those things are harder to find on Tinder. Harry Potter fans know what they want in a mate — and so for many of them, these are the dating deal breakers that would turn them away faster than you can say "Expelliarmus."

1. If You Are Only A Fan Of The Harry Potter Movies

The number one deal breaker for Harry Potter fans is someone's who has never read the books and have only seen the movies. I know, it might be hard to imagine that those people exist, but they do. Don't date them! These people will not properly understand the importance of the Marauder's Map or who Crookshanks is. It will save Harry Potter fans a lot of heartbreak and misery to avoid these people at all costs.

2. You Don't Cry When A Beloved Character Dies

J.K. Rowling has a lot in common with George R.R. Martin. Both have written epic fantasy series that have captured the hearts of millions, and both kill characters with reckless abandon. If your S.O. doesn't cry at the deaths of Sirius, Lupin, Dumbledore, Fred, Snape, or Hedwig, the relationship should end.

3. You Say That The Harry Potter Series Is For Children

Would a book for children depict the violent deaths of teenagers, sacrifice, and have such nuanced examples of unconditional love? Um, no — those are not childish things. A person who thinks Harry Potter is just for kids is not worthy of dating a Harry Potter fan.

If you are dating someone and they mention they think Hermione should have ended up with Harry, run as fast as you can. True Harry Potter fans know Hermione was meant for Ron Weasley. In addition to the fact that they make an adorable couple, Hermione is not some cliche superhero's girlfriend, but her own hero who chooses Ron as her mate. We all gotta respect that — even you, J.K. Rowling.

6. You Think Snape Was A Bad Guy

Hello? Did you not read Harry Potter and the Deathly Hallows? In the final book, it is revealed that Snape was a bad guy who turned good but pretended to be bad to save and mentor the son of his deceased love. Snape was a good guy — always.

7. You Can't Hold Your Butterbeer

No one likes a sloppy drunk; they just don't make good dating material. Save yourself the heartbreak and find someone else.

8. You Don't Want To Visit The Wizarding World Of Harry Potter

Someone who does not enjoy magic, joy, and happiness should immediately be removed from your dating pool.

9. You Say Harry Potter Is "Just A Book"

Anyone who is a fan of Harry Potter knows that Harry Potter isn't just a book series, but a part of who you are. Any potential S.O. needs to know that or ship out. It's as simple as that.