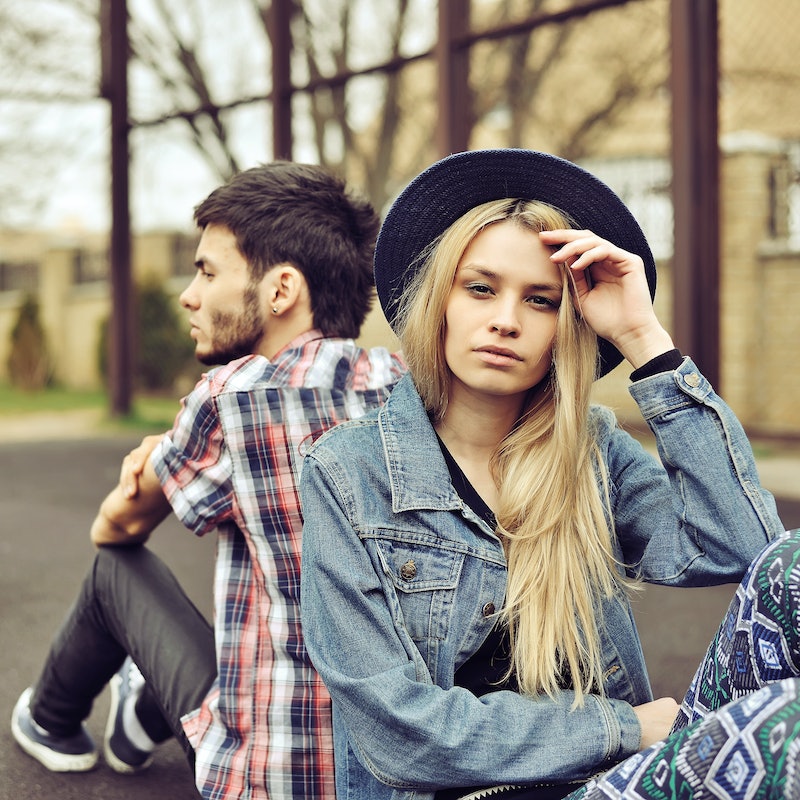 I don't know about you, but I've heard enough about this whole "women are more likely to cheat than men" thing. Apparently, a poll conducted by British dating firm Coffee & Company showed that only nine percent of men said they were sure they would cheat if they encountered a person that they were attracted to, while 25 percent of females said the same. And a 2010 study by the National Opinion Research Center found that the number of unfaithful wives rose 40 percent over the last 20 years. But before you start wondering, "What has happened to our women?!," hang on a second there, champ. When you actually take a look at the research — instead of only reading the select facts that are included in news reports — you'll see that men still take the cake as the gender that strays the most.

Not that this is a competition or anything like that. I'm just trying to say that there are much more compelling ways to talk about infidelity than as some war of the sexes — because, as much as we don't like to admit it, we do get a kick out of having the conversation.

I know there are different interpretations of what cheating is — some people count emotional affairs, some think sexting is a bad as actual sex, etc. — but for the sake of simplicity, the sort of flings referred to below are the physical kind. While there might be scientific explanations behind cheating, none of them excuse the action. But still, hearing the facts — like the six facts about infidelity below — and knowing what research has been conducted on the matter definitely doesn't hurt when we try to make sense of unfaithful flings and trysts.

1. Wednesday Is The Most Popular Day To Cheat

Smack dab in the middle of the week — hump day, if you will — is prime time for human beings to be unfaithful to their partners. Maybe it's the boredom of being stuck between weekends, or the belief that everyone is just too darn busy at work to even worry whether their SO is being faithful. Whatever the cause, Ashley Madison — the notorious dating site for people who are in search of an affair — discovered through a survey that Wednesday is a real winner.

After interviewing 172,000 individuals who regularly use the website, they also found that the most common time for a naughty tryst is between 5 p.m. and 7 p.m. —more than 18 percent of participants chose this as the ideal time for cheating. Suspicious that someone in your life is running around with a person who isn't their partner? Then check on what they're up to on Wednesday evening, right after they leave the office...

People get a hold of some cash and suddenly think they can get away with anything, eh? Those who make more than $75,000 a year are 1.5 times more likely to mess around on their spouse than those who earn less than $30,000, according to a 2002 study about infidelity conducted by the University of Washington. I'd be curious to know if the statistics are the same for people who came from poverty and got rich later in life, but the folks conducting the study didn't seem so interested in those details.

In addition to salary, level of education is also a factor when it comes to adultery. According to the same study, a high school dropout is 1.75 times less likely to fool around than a person who's got a framed graduate degree hanging up in their office.

The study's research points to one major finding: extramarital affairs are simply less common among Americans of lower socioeconomic status. Maybe the boredom of being wealthy is just too much to handle? At least, that's what I like to tell myself.

3. You're More Likely To Cheat When You're Ovulating

Ladies, true story: when you're fertile, you're biologically wired to stray — even if only in your fantasies. Researchers at UCLA and the University of New Mexico conducted studies proving that women were more sexually attracted to men who weren't their partners during their ovulation period; they also reported daydreaming about people they weren't in relationships with during the same time frame.

We can't fight the fact that nature tries everything in its power to get us to procreate at the ovulation point of our cycle. When we're ovulating, our voices adopt a higher pitch; we inadvertently wear more makeup and brighter colors, like red or pink; and we smell so, so much better to men than when we're not ovulating — we're basically walking sex on a stick. I know, I know, these changes don't add up to any acceptable reason for cheating. But next time you find yourself batting your eyes at that cute tattooed barista for no apparent reason, check in with your ovulation schedule. It might be the fault of your high-yielding ovaries. Just remember: those buggers do not control you.

4. You Could Be Genetically Predisposed To Cheating

Binghamton University conducted some research in 2010 that suggested that the "propensity for infidelity" could lie in our DNA. Blame your wandering eye on the DRD4 gene, which is a dopamine receptor commonly referred to as the thrill-seeking gene; it affects the brain's chemistry and is connected to gambling, alcohol use, and good old-fashioned affairs. Justin Garcia led the team responsible for conducting the study of 181 young adults, and he said that the presence of this gene could help explain why some people seem to consistently engage in sexual behavior that is visibly different — and even more destructive — than other people's.

About half of us are born with DRD4, but that doesn't mean half of us are housing an inner monster that is just waiting to pounce and cheat on our sweethearts. Societal pressures and lifestyle choices influence our tendency to be unfaithful; how we think about the concept of infidelity also impacts our odds of straying, and keeping yourself away from sticky situations where you would be more likely to be naughty helps, too. Also, it helps if you didn't witness your mother stray — 73 percent of women who admitted to cheating grew up with untrue mamas.

5. Women Are Better At Not Getting Caught

Obviously, getting away with infidelity is not something worthy of praise; but you probably can't help but find this one a little bit interesting — especially because it has to do with testosterone levels. Men's testosterone levels rise and fall in cycles, just like women's estrogen levels; when levels are particularly high, men are more likely to engage in risk-taking behavior, be overly confident about themselves, and compete with other dudes over just about anything. Studies even show that the higher the testosterone levels, the less the man is concerned with long-term consequences of his actions. Cue the sloppiness. Cue the whole "getting caught" thing.

95 percent of women who have admitted to an extramarital affair report never having been caught, while only 83 percent of men have gotten away with it. The CEO of a dating website told Forbes this is because females "naturally think more contextually" and are able to fully understand the repercussions of their actions before they even take place. If that's true, perhaps we should try to channel that magic to a place where it can be much more useful, like our jobs.

6. Most People Cheat With Someone Less Attractive Than Their Partner

The majority of two-timing people actually report finding their SO more beautiful than the person they ran off with. Seriously! 4,000 people were surveyed on this subject by Victoria Milan, a website for husbands and wives who are looking for an affair (how do so many of these exist?!). Only a quarter of the men surveyed found their mistresses to be prettier or in better shape than their wives. Not as many women could say the same, though: 50 percent of cheating wives said the man they chose over their husband was in better shape and better-looking in general. Still, that figure is lower than I expected.

What is the largest common denominator among people who step out on their partner, then? Survey respondents reported that the person they cheat with was more compassionate and a better listener than their partner. According to this survey, most people say that their extramarital partner makes them feel appreciated in a way that isn't offered at home by their spouse. Sure, infidelity is partly about the thrill and the sexiness of a new body in your bed — but at the end of the day, the unfaithful just want to be heard and understood. Nope, that was not meant to be an "Awww" moment. But with this subject matter, it's as close as we're going to get.