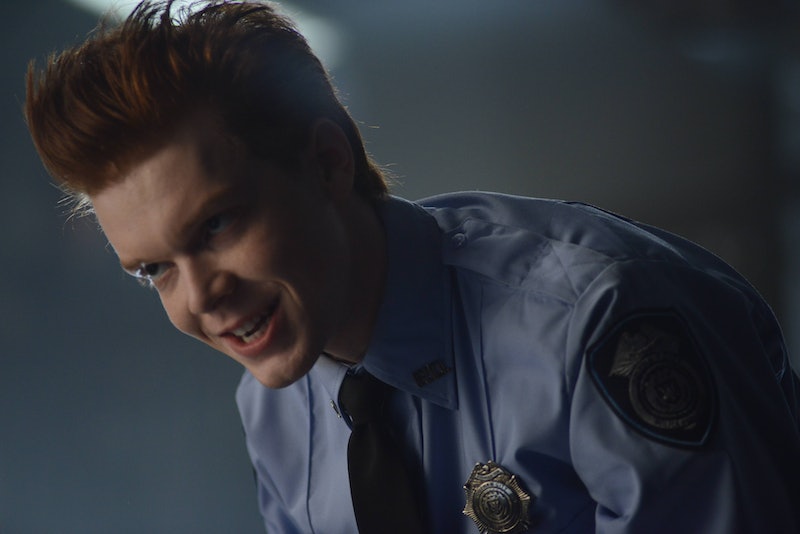 As anyone watching FOX's Batman prequel series already knows, Gotham Season 2 has been wildly entertaining. Much of its sophomore success is due to the season's concept, "Rise of the Villains," especially one villain in particular: Jerome Valeska. Cameron Monaghan has shifted characters from Shameless to Gotham effortlessly, clearly relishing his evil role on the FOX series. It's psychotic, scary, funny, and rather complex, so I understand why so many people believe that Jerome is the Joker on Gotham. Still, I think they've been mislead. While he's an intriguing villain, after going through the clues, I'm confident that Jerome is not the Joker, despite evidence to the contrary.

I know, I know. Sounds insane, right? The guy clearly acts like the Joker! Monaghan's performance even seems like the perfect combination of Heath Ledger and Jack Nicholson's portrayals of the iconic role in The Dark Knight and Batman , respectively. Still, I just can't accept it. From the character timeline to a very revealing episode title and beyond, it's becoming more and more clear that Gotham fans still haven't met the future worst enemy of the Caped Crusader. Here's why Jerome just can't be the Joker, despite Monaghan's convincing performance.

The third of episode of Season 2 is entitled "Rise of the Villains: The Last Laugh." If that isn't a clue that Jerome is in serious trouble, I don't know what is. The only person whose laugh is so iconic enough to warrant the title of an episode is Jerome, and "The Last Laugh" likely means that he will be killed, and probably die either mid-laugh or with a smile still plastered across his face.

Obviously, the Joker has been played by actors of many ages in the past. For example, Nicholson starred in Batman at 52, while Ledger was 29 for The Dark Knight . But one thing is certain about the character: He seems to be about the same age as Bruce Wayne, or at least very close in age. Now, that actually kind of works for Jerome and Bruce, but the difference here is that Jerome is already committing crimes rather notably before he and Bruce hit an age to properly face off. That has to mean something, right? And speaking of timelines...

3. His Descent Into Madness

Jerome's development into a full-on madman who massacres the officers of the GCPD seems to be happening much too early for him to be playing the Joker. Instead, it's probably more likely that he's just the pre-cursor for the kind of horror the real Joker will eventually unleash on Gotham City when Bruce is just about ready to become Batman. By that point, Bruce will know what to expect from deranged villains, because he witnessed it first-hand with Jerome. Though that would technically make the real Joker a potential copycat of Jerome... OK, this Joker business is getting confusing.

If Jerome is the Joker, the fact that he would be willing to share the spotlight with a bunch of criminals is shocking to me. Sure, he ended up killing Greenwood after having a small power struggle with the guy, and Arnold was killed by Tabitha, but the fact that Jerome allowed himself to be picked up and dropped into a group led by someone other than himself doesn't really seem like the Joker's normal method of operation. And on that note...

5. His Lack Of Planning

Why is Jerome letting Theo mentor him and plan this entire evil takeover? Wouldn't the Joker at least be cautious or smart enough to figure out his own evil back-up plan in case someone tries to screw him over?

While villains like Galavan, his sister Tabitha, Edward Nygma, and Oswald Cobblepot are all series regulars for Gotham Season 2, Monaghan is billed as a recurring character. If Jerome really was the Joker, the series would probably want to keep him around. This casting status doesn't totally disprove Jerome, it could just hint that he'll be taken back to Arkham or disappear, but it does make the odds of him taking on the Joker role even less likely.

7. He Fits The Mold Too Well

When we first saw Jerome, the guy unleashed that incredible laugh on us, and Gotham used that scene often, especially when promoting "Rise of the Villains." And as Tumblr user dragon8993 showed, Monaghan's Jerome and Ledger's Joker have been in the same situation time and time again. That could just be the show's way of proving Jerome is supposed to become the Joker, but I think the overt similarities are actually just red herrings.

Or maybe I'm the mad one and Jerome will become the Joker before Season 2 comes to an end. No matter who he really is, I just hope Monaghan gets to stick around on Gotham. He's brought new life to the show, despite his character bringing nothing but chaos.

More like this
This 'Gossip Girl' Wardrobe Error Has Gone Viral On TikTok
By Alyssa Lapid
'The Last Of Us' Has Officially Been Renewed For Season 2
By Darshita Goyal
A New 'And Just Like That' Table Read Pic Confirms A Key Character's Return
By Jack Irvin and Grace Wehniainen
Rupert Grint Just Shared A *Major* Update About Ron Weasley’s Future
By El Hunt
Get Even More From Bustle — Sign Up For The Newsletter
From hair trends to relationship advice, our daily newsletter has everything you need to sound like a person who’s on TikTok, even if you aren’t.