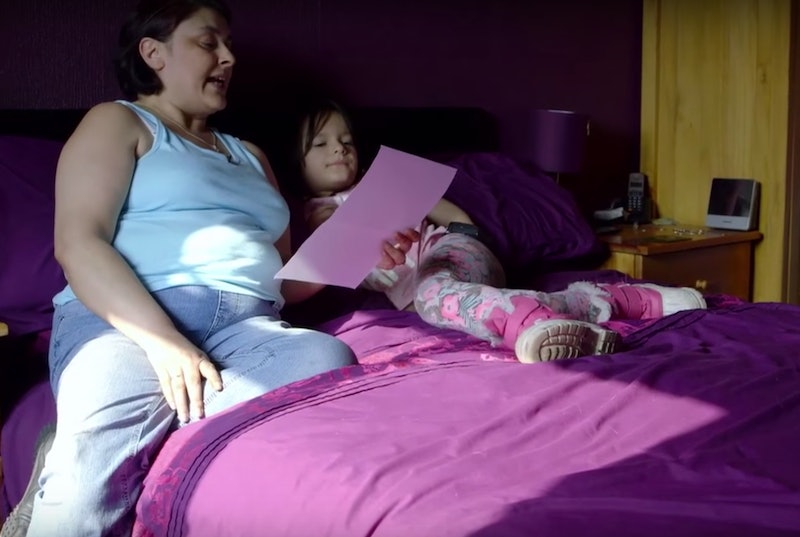 “My butterfly girl fills my heart with joy,” reads Lorna McGuire to her little girl, Paddy, in a clip from an upcoming documentary by Channel 4. The English mother wrote the poem for her transgender daughter a few years ago, when Paddy was 5 and had recently gotten her first dress. Lorna told BuzzFeed in an interview that Paddy had shown a preference for traditionally feminine clothing and presentation from the age of two, but that it wasn’t until she finally convinced her mother to get her a dress that everything fell into place. Lorna said,

I don’t know what it was that made me give in [to buying a dress] when she was 5, but maybe I thought, “Well I’ll get her the dress and she’ll grow out of it, and that will be that.” But it didn’t work out like that – as soon as she put the dress on that’s when I knew. It was a eureka moment. A light bulb went on. As soon as she had the dress on and I saw her face, tears came down my eyes and I knew. Her face lit up. She was so happy, I’ve never seen her so happy in all my life.

Now Paddy lives as a girl with her mother, father, and brother in Leicester. Lorna said she wrote the poem “to make sense of my feelings and the whole situation,” but waited until Paddy was a bit older to read it to her.

This is the poem:

I had a little caterpillar, small, cute and blue He reminded me so much of you I loved him and fed him, tended his every need But he wanted to change I had to follow his lead

I was amazed, what else could I think? No longer a shy boy whose heart would sink But a beautiful butterfly, loud, proud and pink Sometimes I miss my caterpillar boy But my butterfly girl fills my heart with joy

In openly and publicly supporting her trans child, Lorna is setting an important example for other parents. Familial acceptance and support is critical to the health and well being of trans youth. A 2012 survey by Ontario organization Trans Pulse, for example, found that trans youth whose parents were “strongly supportive of their gender identity and expression” were much more likely to report being “satisfied with life” than respondents whose parents were not strongly supportive (72 vs. 33 percent). Furthermore, among respondents whose parents strongly supported their gender identity, 70 percent described their mental health as “very good” or “excellent.” Only 15 percent of youth without strongly supportive parents could say the same. This correlation between parental support and mental health and happiness seems in keeping with a 2014 study by the Williams Institute, the National Transgender Discrimination Survey. The survey found that transgender and gender nonconforming respondents who could report that “family relationships had remained strong after coming out” had a significantly lower prevalence of suicide attempts throughout their lifetimes than those who had been rejected by their friends and families.

When asked what she would say to a parent of a potentially trans child, Lorna’s advice was simple: “[M]ostly just love your child the same, no matter what, and accept your child –they’ll be much happier in the gender they are in their mind than they are in their body.”