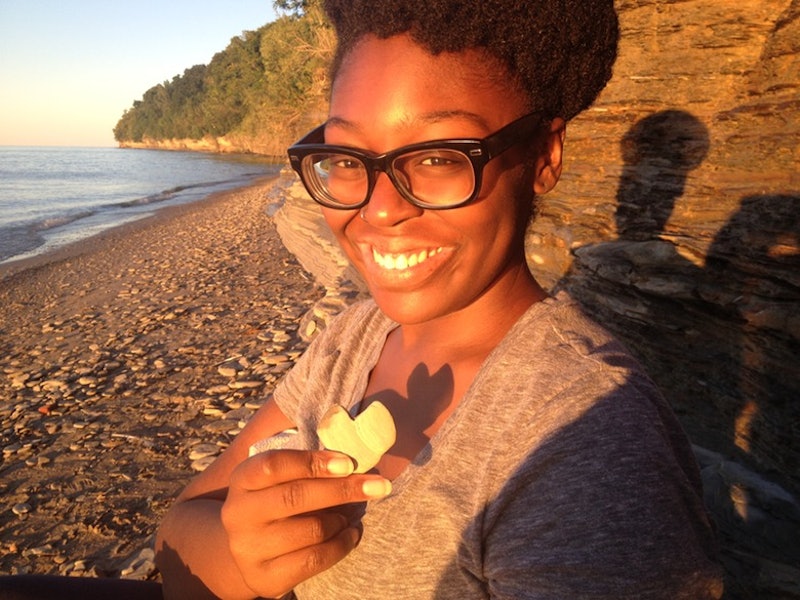 December 31, 2013 was a life-changing day for me. The last six months had been rough for me, for many reasons. I felt lost in my career. My marriage was falling apart. For 28 years, my main mission in life had been to prove to the world that I had my sh*t together. Instead, it felt as if the Universe was saying to me, “The jig is up Akirah. Your perfectionism is no longer sustainable. I’ll prove it. Here's a debilitating panic attack. And another. And another.”

My first panic attack actually brought me to the emergency room. I truly thought I was having a heart attack because my heart was beating so incredibly fast. According to an EKG machine I wasn’t, and the doctor sent me home with brochures about anxiety. I felt silly for going to the ER over a panic attack and nothing in those brochures seemed to help much either. It was only a matter of days before I had another.

During that attack, I destroyed my apartment in utter frustration over the sense of doom I couldn’t control. Then I sat on the floor, crying, while thoughts of ending my life kept popping into my head. Of course, this scared me, so I called a crisis hotline in hopes that the hotline worker could calm me down. He did, until I promised I could be safe on my own.

Days later, I had another panic attack after learning that my doctor wouldn’t be able to fit me in for an appointment for another week. The thought of waiting so long to be prescribed anti-depressants felt impossible — despite the fact that I was pretty resistant to anti-depressants in the past. But after weeks of panic attacks, I knew I needed help and couldn’t believe I had to wait another week to get that help. I sobbed for hours that day.

Eventually, I did get on anti-depressants, and continued seeing my therapist religiously. When you’re diagnosed with Generalized Anxiety Disorder, those things can certainly help, but after months of treatment, I hadn't experienced much relief. I was still crying a lot and had no interest in the things that used to make me happy. Getting out of bed was a hassle, I stopped showering regularly, and I wore sweatpants every single day. My quality of life was plummeting because I couldn't get over all the ways I was failing in life. I knew it would take a few weeks for the anti-depressants to kick in, but this was getting ridiculous. I feared things would never get better, which only resulted in more anxiety.

This brings me to December 31, 2013. I decided to attend a bikram yoga class at midnight, since it seemed like a cool way to ring in the New Year. Prior to the class, I got on my computer and started Googling a bunch of different things about managing anxiety. I eventually found a TED talk about self-compassion, and for the first time in months, I felt the relief I was longing for.

In the talk, Dr. Kristin Neff explains self-compassion. While I recommend you watch it yourself, here’s the gist: folks who practice self-compassion are good at treating themselves with kindness, especially when they fail or life is stressful. Their self-talk mirrors how they would address a good friend going through similar difficulties. For instance, they don't call themselves an "idiot" or a "failure," but rather, are intentional about the words they use to describe themselves. Instead of incessantly criticizing and judging themselves and the less-than-ideal situations they find themselves in, they think before they speak to themselves. And they aim to speak objectively.

Basically, people who are self-compassionate love themselves, despite their flaws. They act like it too.

As I listened to Dr. Neff speak, I could not stop crying. But for the first time in a long time, I was crying because I was happy, not sad. It was as if her words were giving me the permission I desperately needed to stop being so damn hard on myself. Yes, it’d be great to have a clean house, perfect marriage, thriving business, and completed to-do lists ... but at what cost? Was my need to for control over every aspect of my life really worth my sanity? Was my quest to be perfect actually getting me anywhere?

I knew it wasn’t, and all the stuff I learned about self-compassion that night confirmed that. I went to my bikram yoga class knowing that 2014 was going to be my year of self-compassion.

Oddly enough, this is actually when my perfectionism came in handy. I was determined to learn as much as I could about self-compassion, as quickly as possible. I took the self-compassion quiz, bought the book, and started doing the exercises Dr. Neff recommended. I still had my dark days, but the cloud was slowly lifting.

I've even taken Dr. Neff's advice and picked out a soothing pet name for myself. Instead of calling myself "stupid," I call myself "Sweetpea."

Having access to anti-depressants and therapy during that season of my life is something I’m grateful for every single day. Without those two things, I’m not sure how I would’ve navigated that dark period. But I’m also grateful for the three elements of self-compassion: self-kindness, mindfulness, and recognizing that failure is part of the shared human experience. Practicing these three things on a regular basis eventually helped me lessen my dependence on anti-depressants and therapy.

Of course, I know that anxiety can be difficult to manage and not everyone can simply replace their medication with meditation. For some reason, however, something about self-compassion really clicks with me and I was able to. For instance, when I feel my anxiety rising, I practice deep breathing. When I make a mistake, I'm intentional about talking to myself as I would a good friend. I'm not the best at meditating on a regular basis, but when stress pops up I stroke a heart-shaped rock, which helps me calm down. I've even taken Dr. Neff's advice and picked out a soothing pet name for myself. Instead of calling myself "stupid," I call myself "Sweetpea."

I’d be lying if I said all of this was easy for me, though. When stress pops up, my tendency is to pursue perfection — to perform. But over the last two years, I’ve gotten into the habit of being nice to myself. I give myself grace. I let myself be awesome and flawed. It’s a wonderful arrangement I’ve worked out with myself.

So … would I say I’m cured? I mean, I’m definitely not a walking ball of anxiety anymore. But while I can confidently say I don’t let fear run my life any more (fear of failure, fear of losing control, fear of uncertainty), I think I’ll always have a predisposition towards anxiety. Control is an idol in my life that I’m constantly disarming. Every day, I have to remind myself that it’s OK to be less-than-perfect — that it’s okay to just be me.

And the compassionate part of me is more than willing to let that be good enough.