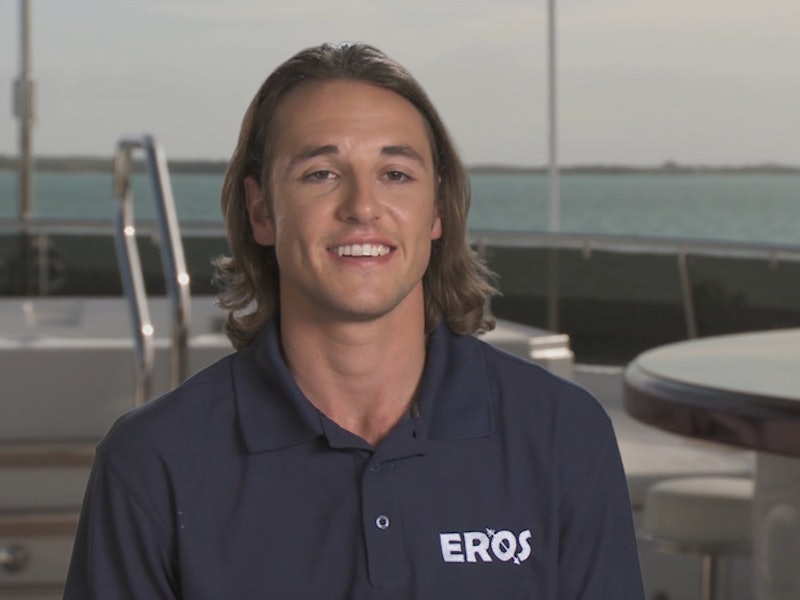 I really do not see how Dane could blow his time on Below Deck anymore than he already has. In Tuesday night's episode alone, the fairly new deckhand totally botched bringing a jet ski back onto the yacht and was the worst at the all-important anchor watch post. Then Dane did what no one should ever do at work: get drunk.

Lucky for Dane, he chose to drink during his free time because if he had been doing it while the crew was on charter, he would have most definitely gotten a plane ticket home from Captain Lee out of there. I'm still pretty sure Dane is going to be the next Season 3 crewmember to go, but Tuesday night was not that night. Dane just got incredibly drunk on board, and it was really difficult to watch.

That's because he drank alone and got belligerent with his crew mates, making everyone really uncomfortable, not only to be around him but also to be on the same yacht as him. Dane yelled at Rocky and aggressively tried to get Emile to join him for a drink. And can I just say that I feel so bad for Emile having to be roommates with this guy, who also woke him up at 5 a.m. by talking loudly to his maybe-girlfriend on the phone? Dude, that is not only rude in the close quarters of the Eros bunks, but it's also just rude everywhere.

Speaking of rudeness, Dane also wouldn't share his alcohol with Kate, to which he felt the wrath of her "bitchy resting face." Connie even said that she was almost a little worried about sleeping a few feet away from Dane while he was getting his drank on at the crew's kitchen table. Don't you go upsetting Connie, Dane. Not cool, man. Not cool.

I can't wait until Captain Lee hears about Dane's shenanigans. Dane is already on the captain's naughty list for the gaffes he made during this episode. Captain Lee even gave Dane a stern talking to during the charter, but he realized it was one of those instances where someone is just nodding, but they're not really internalizing what you're telling them. The captain absolutely hates it when people don't listen to him, so Dane is probably in for a world of trouble in the future.

In fact, it looks like things with Dane are only going to get worse in the future. The teaser for next week's episode showed Dane and Eddie getting into a physical fight, which either means Dane has continued to live up to the reputation he's making for himself as a troublemaker or Eddie really has lost his marbles this season.

Whatever the cause of the fight may be, I can't bear to see sweet, sweet Eddie hurt. Let's hope everyone makes it out OK.