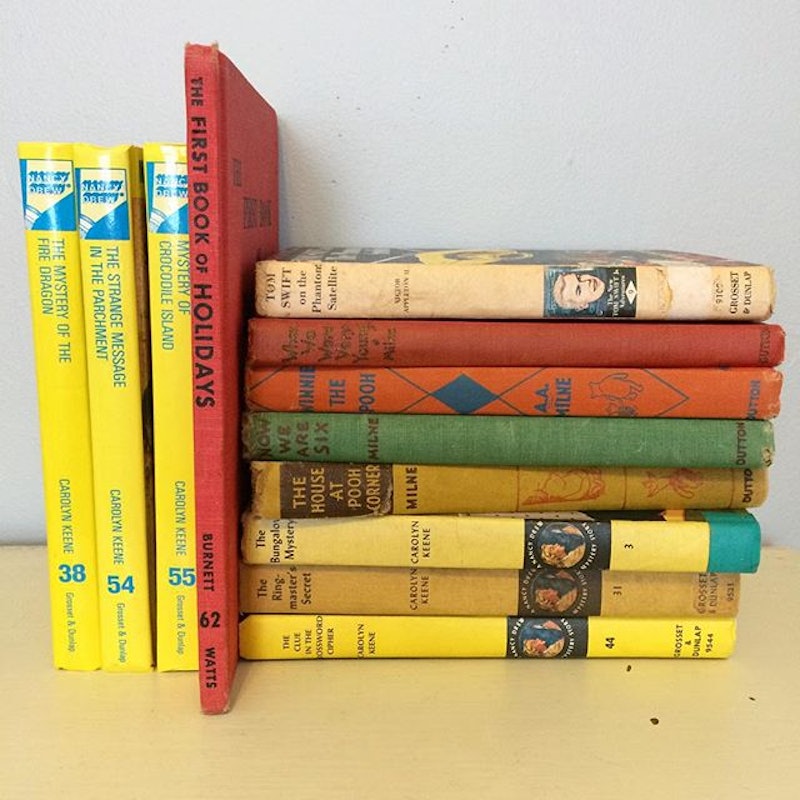 Drop what you're doing and dust off that box of yellow books in your attic. CBS is developing a Nancy Drew TV series, and it's got some serious chops. Grey's Anatomy writer/producers Joan Rater and Tony Phelan are teaming up with Pushing Daisies producer Dan Jinks to bring the girl detective to your flat screen.

Publisher Edward Stratemeyer created the Nancy Drew series in 1930, three years after he brought the mystery-cracking Hardy Boys into being in 1927. That's right: there is no Carolyn Keene, nor was there ever one. Like almost all of Stratemeyer's creations, the series has a long, ghostwritten history.

For the last 85 years, the lady-sleuth's adventures have entertained young readers with their now-stereotypical tropes. Nancy-fever lives on as adults pass down old editions or buy Nancy's new incarnations to share with their children.

The television adaptation will feature the titular girl detective as you've never seen her before. Instead of a mid-century highschooler, Nancy is "a super-sleuth NYPD detective in her 30s" in CBS' "contemporary reimagining." Details in the Monday announcement are few, but Nancy Drew fans have their fingers crossed for an engaging adaptation of the beloved series. Here are the five things we're all thinking and feeling right now.

Will it be any good?

Unfortunately, there's no way to be sure on this one. TV is a finicky business, and sometimes even the best series wind up in the cancellation pile. Here's lookin' at you, Firefly.

If Nancy Drew were a comic book character, I'd be gushing with good feelings about the CBS adaptation, given the last few years' successes in bringing the superhero genre to the small screen. For now, all we can do is cross our fingers that the superteam behind Nancy Drew has its heart and mind in the right place.

Who will play Nancy, Bess, and George?

Ginger Nancy, blonde Bess, and brunette George were the 20th century's original girl squad. To be honest, I'm having a hard time not imagining TV Nancy's circle as Charlie's Angels meets Cagney and Lacey. I'm sure plenty of casting predictions will emerge in the coming months, so I won't bore you with those. But I will say that seeing the women's hair diversity in the novels turned into racial diversity for the screen would be refreshing for all viewers.

What about the Hardy Boys?

Nancy Drew and the Hardy Boys have been teen detective mainstays for more than 80 years. They've solved mysteries together for decades, and even shared a show in the late 1970s, so it just makes sense to have Frank and Joe Hardy on the scene.

Will Carson Drew still be in practice?

Nancy's father was a well-respected, attractive attorney, so I know I'm not the only one hoping to see him silver-foxing it up in the CBS series. Will he be an assistant DA in the NYPD procedural? Or perhaps a criminal defense lawyer, representing the suspects his daughter reins in? These are questions that need answering, ASAP. Inquiring minds want to know.

What will Nancy's fault be?

Book Nancy is flawless. She speaks at least two languages. She swims, dances, paints, drives, shoots, cooks, and plays sports like a champion. One time, she punched me in the face. It was awesome.

Unlike Book Nancy, TV Nancy can't be perfection incarnate. Viewers simply won't connect with her if she is. She has to have some kind of flaw, but until CBS releases more details, we're all left wondering what it will be.

More like this
This 'Gossip Girl' Wardrobe Error Has Gone Viral On TikTok
By Alyssa Lapid
'The Last Of Us' Has Officially Been Renewed For Season 2
By Darshita Goyal
'Mayfair Witches' Already Changed 2 Major Characters From The Books
By Grace Wehniainen
Hilary Duff Is “Optimistic” About A 'Lizzie McGuire' Reboot
By Alyssa Lapid
Get Even More From Bustle — Sign Up For The Newsletter
From hair trends to relationship advice, our daily newsletter has everything you need to sound like a person who’s on TikTok, even if you aren’t.