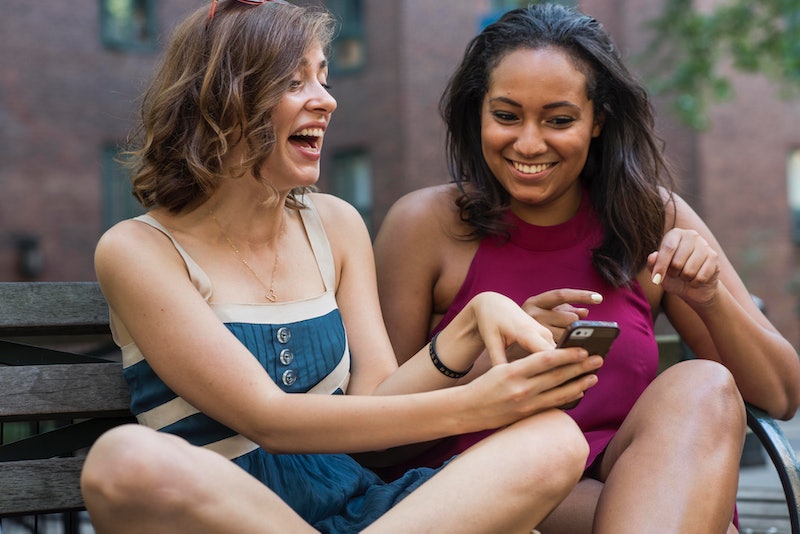 Right swiping, though decidedly not a very romantic gesture to begin with, now means even less, thanks to Tinder's Super Like feature. While it's still nice to know that someone likes you enough to twitch their thumb to the right rather than passing over your Tinder profile, Super Liking has opened a whole new can of online dating worms: what does it mean when someone Super Likes you instead of likes you?

The point, of course, is to show even more interest than a right swipe alone can convey. Because you get a limited number of Super Likes, it expresses to someone that you saw something special in them and used one of your precious Super Likes on them. While this is a nice sentiment, it may not actually give you any better results than you're already getting. Dating apps can be tricky, and often involve a lot of mixed signals; the Super Like is an attempt to clarify your feelings, but the fact remains that until you start talking to someone, you can't really know how much you will or will not like them.

Since this feature is still so new, a lot of people are confused by what exactly it means when someone Super Likes them. Here are five possible explanations — feel free to experiment with the feature and see if it helps you get a high-quality date.

1. They Want To Bang

Since there are a ton of people on Tinder who want to hook up, the chances that someone Super Liked you in the hopes that they'll end up in bed with you is pretty likely. There's nothing wrong with that of course, but beware that someone who Super Likes you probably just thinks you're ~super~ hot. So congrats, I guess?

2. They're Into Your Personality

Alternatively, a Super Like could indicate that they want more than just a simple hook up or one night stand. By pressing Super Like, a guy or girl might be trying to let you know that you somehow piqued their interest in more than just a physical way. Although it's hard to get an honest feel for your compatibility with someone based on six photos and a few-sentence bio, there's nevertheless the possibility that you really just struck their fancy.

Not to be rude, but someone who uses the Super Like button might also be utilizing the feature out of necessity. Maybe they rarely get matches, and are hoping that by expressing more interest in someone, that person will be more likely to give them a shot and like them back. If that's the case, more power to them — whatever works, right?

4. They Want Your Attention

When someone has Super Liked you and they show up in your queue of matches, there's a bright blue banner with a star next to it, so there's no mistaking their level of interest in you. It's like the dating app version of catcalling, but obviously less creepy and a tad more sincere. To be fair, I have to admit that it at least captures my attention and makes me stop for a second to meticulously analyze their profile. After all, I wouldn't want to accidentally pass up someone who is apparently very into me.

5. They Have No Idea What It Means

TBH, a lot of people are pretty clueless when it comes to online dating etiquette and might simply hit the Super Like button out of curiosity, especially because it's such a new feature. That, or they have huge thumbs and just accidentally hit the star button rather than the heart. *Shrug*

More like this
Hinge's New NFAQ Feature Is Demystifying Queer Dating
By Emma Carey
The Best Time To Date After A Breakup, According To Experts
By Bustle Editors
Virgo & Sagittarius Zodiac Compatibility, According To Astrologers
By Kristine Fellizar
How To Use Instagram Story Highlights So Everyone Sees Your Fave Stories
By Brandi Neal and Emma Carey
Get Even More From Bustle — Sign Up For The Newsletter