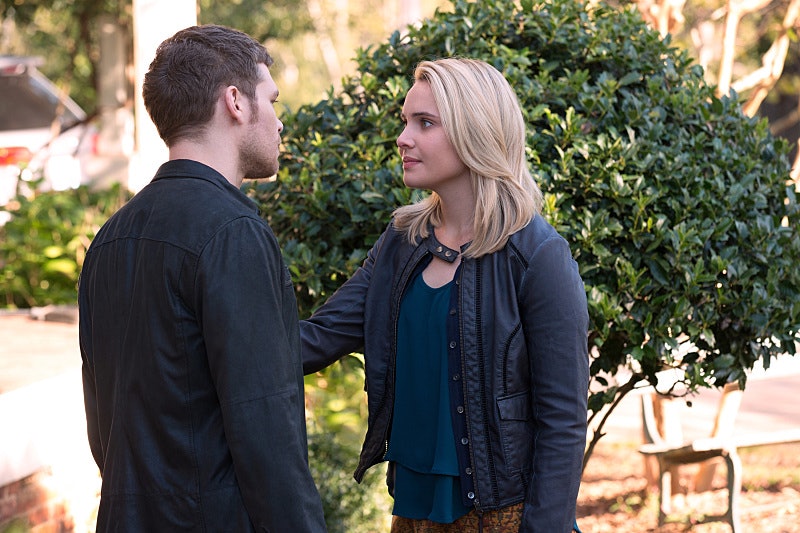 At some point during every TV show you end up asking the age-old question that inevitably sprouts up about two insanely attractive characters: will they or won't they? Which is exactly what viewers have been contemplating about The Originals duo Klaus and Cami pretty much ever since the series debuted. As much as I'm still a strong supporter of Team Klaroline, there's no denying that an unspoken chemistry exists between these two, which means it's probably only a matter of time before a Klaus and Cami hook-up gets thrown into the works. And I have a feeling that The Originals Season 3 will be the year it all comes to fruition. Because, let's face it, the chase game can only last for so long.

I'm not saying it's going to happen quickly. In fact, according to a recent chat Leah Pipes (who plays Cami) had with TVLine, it appears Klaus and Cami will continue to fight against their feelings for each other by "setting up boundaries" with each other during their upcoming therapy sessions. Because, guess what? Klaus is about to become Cami's very first official patient. But even the best laid plans don't necessarily work out the way they're supposed to. And something tells me that working in such an intimate setting together — with Klaus sharing his inner-most thoughts and feelings — will eventually lead these two to finally give into their desire for one another.

I'm not saying that this is what I want. (Like I said, I still think Klaus and Caroline are meant to be.) But it's what I think the series is setting up to have happen. When you tease a potential romance for so long, it's rare to not see it through to the finish line. And given what a reliable ally Cami has proven to be to both Klaus and Baby Hope, she's bound to be rewarded for such efforts and will undoubtedly play a vital role in Klaus' life throughout the season. It's just a question of how long the writers will decide to tease us with this budding romance before allowing it to become a full-blown relationship.

Klaus has always valued power and family above all else. Perhaps Cami will prove to be the exception to that rule and break down the walls this Mikaelson has spent several lifetimes building up. We've always known that Klaus was in need of some serious therapy. Maybe Cami is just what the doctor ordered.