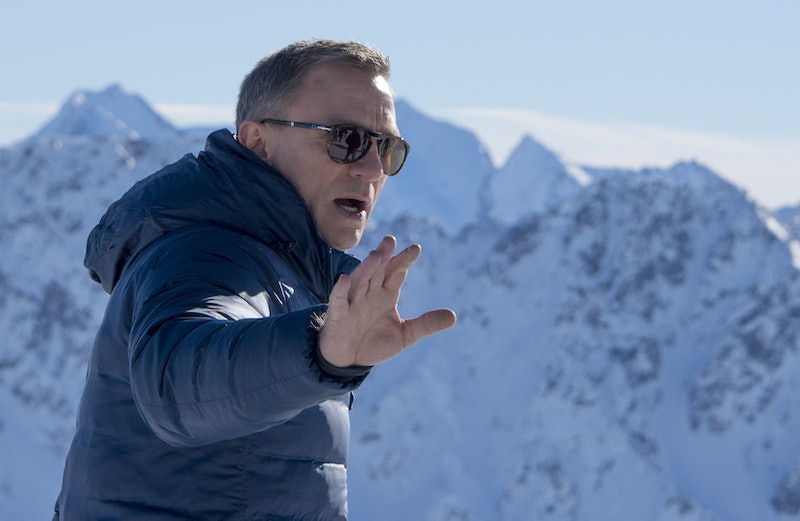 Oy vey. In a rather frank interview with Time Out, Daniel Craig took a break from promoting Spectre , next month's highly-anticipated sequel to 2012's Skyfall, to make it clear that he'd rather die than ever play James Bond again. So, if you're wondering whether or not Craig will star in another James Bond film... probably not.

So, what'd he say? Perhaps fearing his words would be misunderstood out of context, the actor went for vivid imagery over tact: "I’d rather break this glass and slash my wrists," he responded when asked if he could imagine doing another Bond film, before continuing, "No, not at the moment. Not at all. That’s fine. I’m over it at the moment. We’re done. All I want to do is move on."

When pressed to clarify his already crystal-clear position, Craig hedged his bets by offering one scenario under which he would consider returning to the franchise: "If I did another Bond movie, it would only be for the money." Yeesh. Tell us how you really feel, Craig.

To the many fans of the mega-popular Bond films, Craig's words may smack of ingratitude; after all, those films are what made him famous. While he wasn't exactly destitute pre-Bond — he has an extensive resume dating back to 1992, after all — he certainly wasn't anything close to the household name he is now. His most well-known credit Stateside prior to 2006's Casino Royale was probably his role as the unnamed protagonist in the 2004 British crime thriller Layer Cake, by director Matthew Vaughn (Kick-Ass, X-Men: First Class, Kingsman: The Secret Service.)

The partnership between Craig and Bond was a mutually beneficial one. While Craig got a career boost — it's unlikely he would have landed roles as high-profile as the lead of David Fincher's The Girl With The Dragon Tattoo without his increased name recognition — the franchise itself was resuscitated. (Critical reception jumped from 57% Rotten for Pierce's Die Another Day to 95% Certified Fresh for Craig's Casino Royale .)

Biting the hand that feeds you is rarely a good idea in Hollywood. In 2007, Katherine Heigl won an Emmy for her performance as Izzie Stevens on ABC's Grey's Anatomy. The following year she declined to even submit herself for Emmy consideration, announcing that, "I did not feel that I was given the material this season to warrant an Emmy nomination and in an effort to maintain the integrity of the academy organization, I withdrew my name from contention." The relationship between Heigl and her producer Shonda Rhimes reportedly never healed, and the star left the show one year later at the beginning of the sixth season.

But maybe Daniel Craig doesn't care about all of that — maybe he truly does yearn to return to his days of anonymity and obscure projects. If so, there couldn't be a better time. (Of course, I say that without having seen Spectre. Watch it end on an agonizing cliffhanger and I'll eat my words.) The five men who played Bond before Craig averaged exactly four films apiece, discounting non-canon entries Never Say Never Again and 1967's Casino Royale: six with Sean Connery, one with George Lazenby, seven with Roger Moore, two with Timothy Dalton, and four with Pierce Brosnan. After Spectre, Craig will have completed four Bond films — perfectly in line with the franchise average.

So what's to stop Craig from simply hanging up his Walther PPK, parking his Aston Martin, and shaking his last martini? His contract, for starters: Back in 2012, shortly before Skyfall debuted in cinemas, the actor renewed his agreement with Eon Productions for another two films after that high-grossing sequel. (Skyfall came in fourth at the box office that year, behind only The Avengers, The Dark Knight Rises, and The Hunger Games.) Of course, though, this could be changed — any Grey's Anatomy fan could tell you that contracts don't necessarily mean anything. (Audiences were devastated when Patrick Dempsey's Derek Shepherd was killed off in Season 11 despite a contract that should have carried the actor through the current twelfth season.)

(Also, who knew that James Bond and Grey's Anatomy would have so much in common?)

To summarize: Craig wants out, he's completed the average amount of Bond films per actor, and contracts are not always ironclad. While a fifth Bond film is certainly not completely out of the question for the actor, we should all probably approach Spectre as Craig's swan song just in case. It's not like there's a shortage of terrific actors lining up to play the suave British spy, either: Idris Elba, Tom Hardy, Damian Lewis, and Hugh Jackman are just some of the many high-profile names that get consistently bandied about when discussing the franchise's future. If Craig's exit means the introduction of the world's first black Bond, then I'm all for it. (Or, perhaps the first openly bisexual Bond? I could certainly get behind that, too.)

Whatever the future of the franchise may be — and whatever Craig's attitude towards it is — Spectre is looking to be another action-packed success for James Bond, especially with a stellar supporting cast including Christoph Waltz, Monica Bellucci, and Léa Seydoux. Spectre ghosts its way into theaters on Nov. 6, 2015.