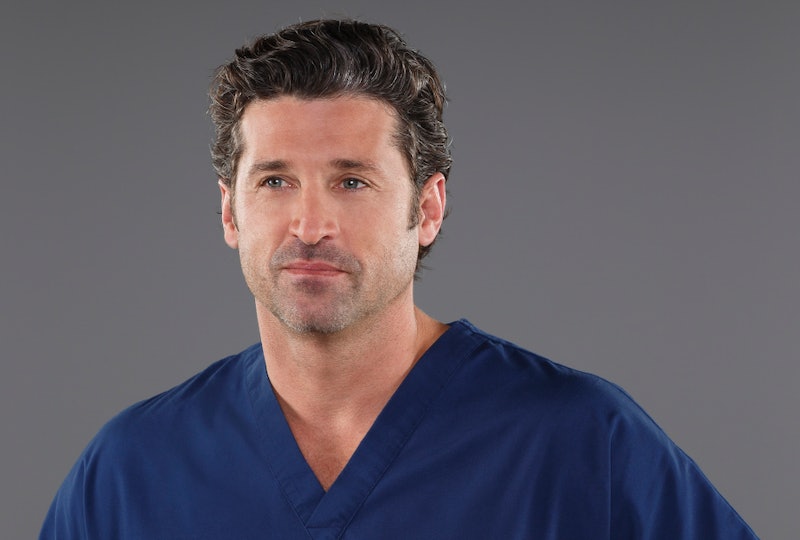 Everybody freaking out about whether Derek Shepherd is about to die on Grey's Anatomy and whether Patrick Dempsey is leaving the show... let's all just take a deep breath and calm down for a second. Yes, Derek is currently missing. Yes, the police came to Meredith's house for some reason. Yes, the promo for next week's episode, "How To Save A Life," shows Derek in a dangerous situation, helping injured people after a nasty car wreck. And yes, that same promo warns that "nothing can prepare you for what happens next" and hypes the hour as "the episode America will never forget."

So why am I not worried? Because it's a promo. Its job is literally to create buzz — and this one did an excellent job, considering how many people now seem convinced that Derek is about to kick the bucket, even going so far as to defend why that would be a good thing. Also, when half of the cast's contracts were up at the end of Season 10, Patrick Dempsey was one of the first actors to renew his — through Season 12.

Sure, other cast members have departed Grey's, like Katherine Heigl and most notably Sandra Oh; but Oh announced her intention to leave well ahead of time, chose not to renew her contract, and allowed Shonda Rhimes to craft Cristina Yang a fitting exit. That's very different from letting such a major player leave not even midway through his two-year contract. Something big is certainly going to happen in this Thursday's episode. Derek could be hurt, he could be even be in a coma... but Dempsey isn't going anywhere anytime soon.

Besides, the writers would be crazy to let McDreamy go! Surely they realize how integral he is to the show. Grey's just wouldn't be Grey's without...

It's the first part of him we ever saw, way back in the pilot.

Could it be any handsomer?

I will forever be jealous of McDreamy's luscious locks.

Couldn't you just fall into those baby blues forever?

"It's a beautiful day to save lives."

They're even on his scrub cap. (See above.)

He doesn't have to be super-serious-surgeon all the time. Oh, and even his morning breath is adorable.

His Love For Meredith

Meredith's already lost her mom, her stepmom, her half-sister, her unborn child, several fellow doctors, and her "person." Does she really need to lose her husband, too?

More like this
Why Was Sandra Oh At The Queen's Funeral? She Represented Order Of Canada
By Radhika Menon
Paul Mescal, Man Of Mystery
By Samantha Leach and Heather Hazzan
Mike Flanagan Teases 'The Midnight Club' In This Exclusive, Creepy Clip
By Grace Wehniainen
'The Rings Of Power' Episode 6 May Reveal Sauron’s Identity
By Grace Wehniainen
Get Even More From Bustle — Sign Up For The Newsletter