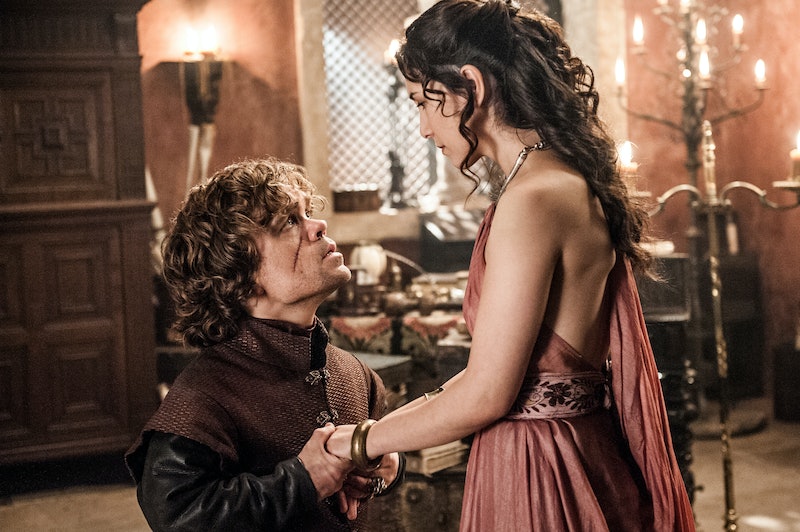 Now this is a Game Of Thrones scoop I didn't see coming. While news has been pouring in about new additions to the cast of HBO's Emmy-winning fantasy drama, one familiar face has just been added to Season 6's deep roster. Typically, the only way characters come back from the dead on Thrones is if a White Walker or a Red Priest is nearby; so it's very curious indeed that Sibel Kikelli who played Shae was spotted on the Game of Thrones Season 6 set. As you probably remember, Shae was killed by her lover, Tyrion, in the Season 4 finale. So what the heck is she doing there?

In the first of many pictures snapped of the actress on the set of Meereen in Peñiscola, Spain earlier this week, she's just smiling and wearing her street clothes. Easy enough to explain; she was just visiting her friends and former coworkers, right? But in the very next shot, she has changed out of her street clothes and is now wearing an obviously Thrones-ian costume very similar to the outfits Meereenese slaves wear. What gives? In a series of shots, she's seen in close proximity to Peter Dinklage (Tyrion Lannister), Conleth Hill (Lord Varys), and showrunners David Benioff & D.B. Weiss. In one frame, she even appears to be perusing a script. This certainly looks like more than a friendly visit.

So how is the show going to explain Shae's sudden return from the dead, if this is, in fact, what it looks like?

Perhaps it will be revealed that she was never dead at all. Despite what movies and TV try to tell us, choking someone would actually take a really long time. Although compressing someone's carotid artery would cause them to lose consciousness in only 15-20 seconds, it would take two-to-four minutes of continued pressure before they died. (Of course, if he crushed her larynx, she would asphyxiate even if he let go.) So it's possible that Tyrion merely caused Shae to faint when he strangled her with that necklace, and she came gasping back to life shortly after he left the room. Absurd? Maybe. Feasible? Definitely.

2. She Has An Identical Twin

Ah yes, the old tried-and-true trick to bring a cast member back from the dead: the revelation of a long-lost identical twin! This might be a bit too soap-opera-y even for Thrones, but it's true that Shae herself hailed from Lorath, a foreign city across the Narrow Sea from Westeros. I'm just saying it's not impossible that she has a sibling somewhere on the continent of Essos. Now, the likelihood of that sibling being a dead ringer for Shae and stumbling across Tyrion in Meereen? Admittedly not so high.

Game Of Thrones had a long-standing rule to never include flashbacks; however, they broke their own rule with Season 5's opening scene, which saw a young Cersei receive a prophecy from a witch. We already know Season 6 will contain glimpses into the past thanks to Bran's visions, so perhaps Benioff & Weiss have relaxed their "No Flashbacks" rule. The only problem with this theory is, Shae was never in Meereen. If they were filming a flashback involving her and Tyrion, wouldn't they be in Belfast, where the interior scenes for King's Landing are filmed on a studio lot?

The most likely explanation for Shae's presence is that she's merely a hallucination of a guilt-ridden Tyrion. I can see it already: He's wandering the streets of Meereen in an alcohol-fueled haze. The crowds part. He glimpses a familiar-looking dark-haired woman. It's Shae. He stumbles towards her. The crowd passes between them. When the masses disperse, she's gone. It was but a figment of his imagination. (Aaaand, cut! That's a wrap.)

If only there was a character on Game Of Thrones who could magically take on the appearance of a dead person... Oh wait, there's a whole cult of them! Arya's tribe of Faceless Men make a living out of carving the faces off of corpses and wearing them to assassinate people. Could the Faceless Men be targeting Tyrion for some reason, and using the visage of his dead lover to get close to him?

Aaaand then there's the totally boring but totally logical alternative: that Kikelli did merely drop by the set to visit her friends, and volunteered to jump into the background of a crowd scene as an extra while she was there. Like I said, boring. But the crew certainly doesn't seem to be going to any great lengths to hide her presence. If Shae's return were a big secret, would she really be hanging out in broad daylight right next to the show's biggest star and waving directly at the camera?

But then again, if she really was just filling in as an extra, why did she need a script? Something's definitely fishy here... Thank goodness I don't have anything better to do for the next five months before Game Of Thrones Season 6 premieres than overanalyze the crap out of blurry set photos.