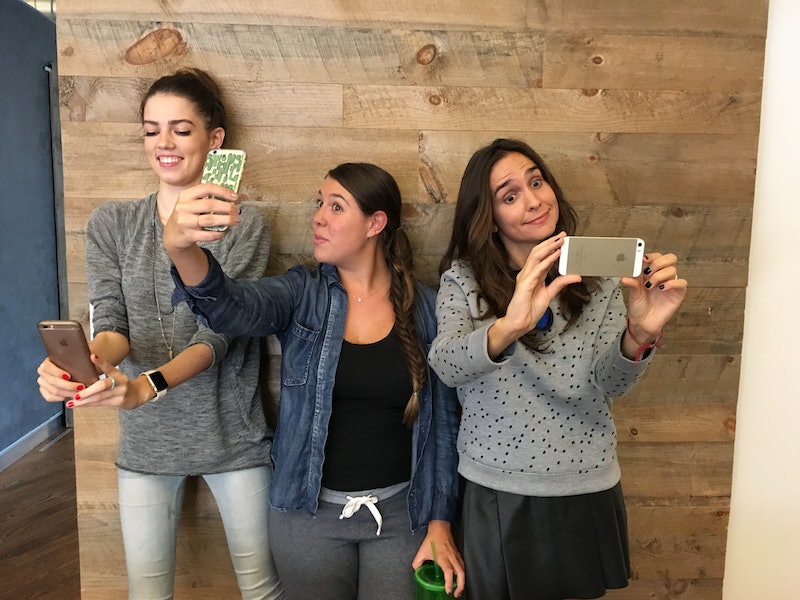 To find out, I enlisted the help of senior Bustle editor Rosanne Salvatore, as well as deputy editor Julie Alvin. Rosanne has an iPhone 6 "with a dope cactus case" (I quote), while Julie has an iPhone 5S ("I'm perfectly happy with my iPhone 5S, even though my snobby friends make me feel like a Luddite for still having one"). As for me, I just got an iPhone 6S. If you need me this weekend, you'll be able to find me wide-eyed and fiddling with Force Touch in a corner somewhere and looking up pretty cases for it.

So in the name of science, we began snapping ...

After taking these shots, we noticed that we'd all held the iPhone 5S closer to our faces than we did the other models. Perhaps because the phone is a little smaller, it's slightly more difficult to check out the shot as you're taking it.

Clearly, Julie got out of the right side of bed this morning.

Rosanne wasn't a fan of the littlest of the iPhones we used, explaining that once you have the iPhone 6, which is distinctly bigger and rounder than previous models, the iPhone 5 feels very ... square.

She ain't wrong. Here's the iPhone 6 compared to its predecessor.

One thing I noticed: Because the iPhone 5S screen is significantly smaller, it's harder to see a lot of resolution on the screen itself while you're taking the shot.

While the iPhone 6 didn't have any more megapixels than the 5S, the camera is significantly better, particularly when it comes to focusing on details and working in low lightning. "If the camera is one of your main reasons for upgrading," one CNet review noted, "go ahead ... it's definitely worth it."

No lens could make Julie and her sunglasses look anything but A+.

"Wow, my phone is the most superior," was how Ro put it. (You can see that she's able to hold the phone a little further away from herself because the screen's bigger.)

Fun fact: Taking dozens of selfies with a big smile plastered on your face is very cheering.

Even though we're mid-movement in this shot, the camera still caught a ton of detail.

In many ways, the iPhone 6 and 6S are similar — they're the same height and width, so you can't physically tell them apart — except when it comes to photos. The 6S camera has a colossal 4 million more megapixels, plus this little thing called Live Photos. Live Photos are split-second movement pics that aren't long enough to be GIFs, but aren't quite photos either. Regardless, you can save and share them as high-definition still photos.

With the newest iPhones model, there's a noticeable difference when it comes to detail. You can actually see every strand of hair, every freckle, every whorl in the wall behind us.

One more thing I learned: My selfie game needs work.

Here's the distinction between our selfies, with the iPhone 5S shot on the left, iPhone 6 in the middle, and iPhone 6S on the right.

In spite of the 5S and 6 cameras having the exact same number of megapixels, you can clearly see the distinction between the quality of the photos. The iPhone 6 photographs focus clearly on the subject, even when it's in movement, sharpening features and providing a more realistic color balance. If you look at the difference between the textures of our clothes, for example, the shots become progressively more detailed — less flat, more three-dimensional.

Not only are there a whole lot more megapixels, but the iPhone 6S also turns every photo into a Live Photo, which looks a little something like this.

And although we took our photos indoors, beside a window, the 6S also features a nifty new feature called Retina Flash, which is a front-facing flash that lights up your screen when you take a photo in the dark. (Don't ask how it knows you're in the dark. It just does.)

To conclude? Perhaps the biggest distinction between the iPhone 6 and 6S is the camera apparatus. Clearly, Apple focused its energies on photography while coming up with the specs of the latest model, and when it comes to selfies, you'll notice the difference.