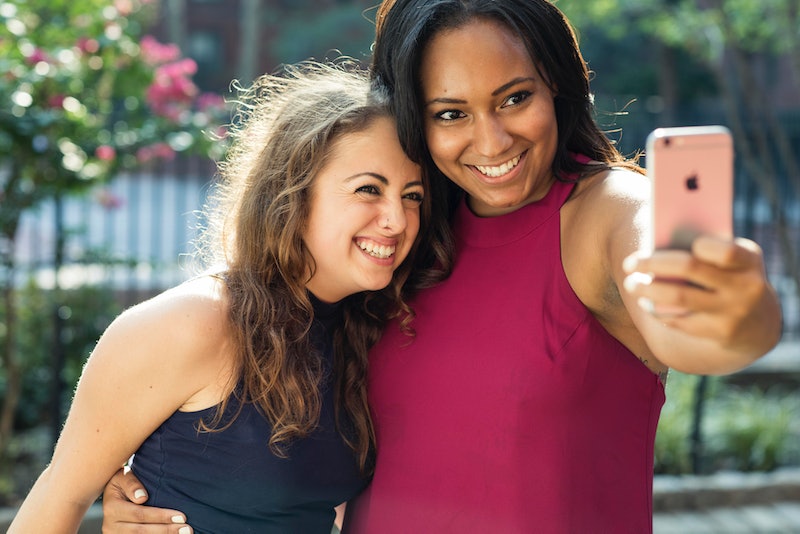 Last week, grown men apparently could not be expected to maintain any semblance of respect or restraint when a group of sorority girls started snapping selfies at an Arizona Diamondbacks baseball game. Grown-ass women everywhere took umbrage to the selfie-shaming — including sexpert Laci Green, who just dropped the hammer of truth on all the haters by explaining how selfie-shaming is inherently sexist.

Green addressed the issue on her MTV digital series Braless, a pop culture forum often used to empower women and educate men about feminism and social issues affecting women. Among the faults she finds in the ball game debacle? For starters, the fact that the announcers first called the crowd to take selfies as part of a T-Mobile promotion... and then mocked the selfie-savvy sorority girls for doing the very thing they were asked to do. Here's a fun fact, though: When the organization later offered the sorority free tickets to a ball game in apology, the ladies refused and asked for donations to be made to a domestic violence center instead.

But, beyond the unadulterated obnoxiousness of the men's actions, Green addresses the underlying issue we should all be discussing instead of worrying about duckface: How sexist behavior like this is perpetuating a patriarchal system in which women are punished for having self-confidence. "The concern people express about selfies is almost identical to misogynistic insults that have been hurled at girls forever: That we're vain and superficial and vapid and desperate for attention," she says. "That we're not real fans — we're just plotting for male attention. Obviously, everything girls do is for boys, right?" Preach, lady, PREACH.

Plus, much like the sports announcers asked the sorority girls to take selfies and then chided them for the gusto with which they did so, Green points out that society indoctrinates young girls with mixed messages. "It's strange living in a culture that aggressively tells girls their primary value is in how they look, and then proceeds to mock them for paying any attention to their appearance. And not only should women be beautiful to have any value, but we should also deeply hate ourselves," Green says. A quick glance at the cover of nearly any women's magazine or the lyrics of pop songs back Green's assertion that culture has a nasty habit of romanticizing girls with low self-esteem. Which is precisely why we should be taking them loudly and proudly, ladies.

Just check this logic. Here's why selfies are one of most accessible methods of empowerment out there:

1. Selfies Are "Radical Tool(s) Of Defiance"

If we were to rely on the images we see in mainstream media or the pictures culled by pop culture, we might actually start wondering if women only existed in a very specific combination of genetic attributes. "Selfies bring a diversity of gender, expression, body types, skin colors and so on into the spotlight, where they're usually missing," says Green.

Selfies, points out Green, "can also be a form of self-celebration." So, novel idea: instead of playing into a pattern of self-hatred, selfies encourage self-confidence and personal empowerment. Yes, we'll have more of that, please.

4. Selfies Inspire Us To Be Authentic

Rarely does a medium come along that elicits such a strong sense of authenticity as selfies do. Sure, we all like to get arty with filters and share our glamorous mugs with the world. But an upward trend in selfies is posting the mundane moments and less than stellar looks, too. Bedhead, anyone?

The bottom line here is to snap away. It may be a minute before society catches on to the intrinsically empowering properties of the selfie, but we can sure love the heck out of ourselves until then.