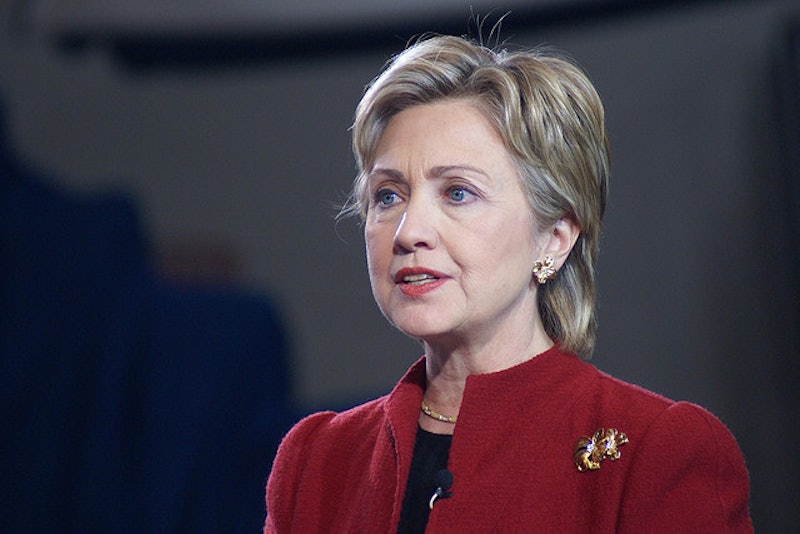 The stage is set. On Tuesday, the Democratic candidates will come together for their first debate, hosted by CNN. And CNN host Anderson Cooper, who will be moderating the debate, is gearing up for any eventuality — namely, for the possibility of Vice President Joe Biden entering the race. CNN has announced that he will be permitted to join the debate if he announces his presidential candidacy by the time the debate starts at 6 p.m. Pacific time. But even if Biden doesn't decide to run, the debate still promises to be valuable and interesting: Democratic frontrunner Hillary Clinton and top challenger Bernie Sanders — who has been rapidly catching up to Clinton in the polls — will be joined by fellow candidates Martin O'Malley, Jim Webb, and Lincoln Chafee.

The Republican debates have been quite the spectacle. Two candidates — Rick Perry and Scott Walker — may have dropped out, but there are still 15 Republican candidates running for president, and between Donald Trump's determination to offend everyone, Carly Fiorina's attempts to tout her business record, and Ben Carson's consistent emphasis on his career as a neurosurgeon, it has been quite unclear who will actually come out on top during the primaries. But the Democratic debates, with only five — or possibly six — candidates and a fairly defined list of important issues, will hopefully be a better indicator of who will eventually face the Republican nominee. The ways in which the candidates handle the following issues will likely have a significant impact in upcoming caucuses.

Sanders and O'Malley both found themselves in hot water over the summer at Netroots Nation, where a group of #BlackLivesMatter activists streamed into a presidential town hall event to hold the candidates accountable. O'Malley said "all lives matter," while Sanders lost his temper. Both candidates have since taken steps to address racial justice, and have apologized for their reactions at Netroots. Sanders in particular has been grappling with BLM for months; protestors have shut down multiple Sanders rallies, demanding that he take action. In response, he added racial justice to his official platform.

BLM activists have also been putting pressure on Clinton, but when she met with a few of them after a forum on substance abuse in New Hampshire, her remarks resulted in disappointment. She told the activists that the BLM movement "can't change hearts," and that they ought to concentrate instead on getting things like mass incarceration onto a political agenda. In doing so, she placed the responsibility of dismantling oppressive structures on marginalized folks instead of on people — like her — who occupy positions of power.

Webb, meanwhile, has said that America has focused too much on the interests of marginalized groups, saying instead that there ought to be an increased focus on "disparities in white cultures." BLM has been a hot button issue for months, and will almost definitely come up during the debate. This could be an important moment for the Democratic party, and the ways in which candidates respond to questions about BLM and other movements for justice will reveal to voters of color exactly how dedicated the candidates are to the causes to which they've been paying lip service.

The Republican candidates have been at each other's throats on this issue, especially after Donald Trump called Mexican immigrants "rapists," "drug dealers," and "criminals" and Jeb Bush made offensive comments about "anchor babies." The Democrats certainly haven't stirred up this degree of controversy, but their views on immigration will certainly be put to the test. Clinton has received backlash from immigration activists who have urged her to stop accepting donations from two of the largest private prison operators of immigrant detention facilities nationwide. Sanders, meanwhile, criticized the concept of open borders in a conversation with Vox's Ezra Klein — from his economic justice perspective, open borders would make American workers poorer, and it is their rights he defends. This, of course, has earned him criticism from some of his more progressive base. Nevertheless, Sanders has added a "fair and humane" immigration reform proposal to his campaign.

O'Malley has seemingly been leading the charge on immigration reform, touting his record of supporting immigrants' rights and laying out an extensive immigration reform plan that would expand on President Obama's executive action. Webb, on the other hand, has been more conservative than most Democrats on the subject of immigration reform; though he supports a path to citizenship, he has previously voted "yes" on making English the official language of the United States. Chafee, like O'Malley, supported in-state tuition for young undocumented immigrants in Rhode Island, and rescinded a previous governor's executive order that called for stricter enforcement of federal immigration laws.

Immigration, like BLM, has been and continues to be an undeniably important subject that will inevitably come up during the debate, and with such a wide array of policy plans from these five candidates, it will be useful to see how they tackle Cooper's questions on the matter.

Sanders has been criticized for saying very little about foreign policy, while Clinton is still feeling the consequences of the Benghazi attack. As former Secretary of State, Clinton certainly has a great deal of experience in dealing with foreign policy. Then there's O'Malley, who says that a strong foreign policy "starts with a global middle class." But for the most part, the candidates spent this summer primarily addressing domestic politics. The one exception might be Webb, who entered the presidential race emphasizing the role of the president as Commander-in-Chief. Chafee hasn't been particularly vocal about his foreign policy platform, but the former senator — who, in the past 16 years, has gone from being a Republican to an Independent to a Democrat — is involved with J Street, a liberal Jewish organization that is a proponent of the two-state solution and an end to Israeli occupation of Palestine.

During the debate, discussions about ISIS, Israel/Palestine, and China could shed some much-needed light on how these candidates would handle the foreign policy obligations of the presidency.

Moving Past The Stump Speech

This isn't a political issue so much as one of debating ability. We've heard the candidates' speeches as they've campaigned around the country. But the debate will be the first time we see all of them in conversation. Sanders in particular has been criticized for sticking to the script, and spending way more time delivering his stump speech than answering questions. All the candidates need to be on their toes going into this debate — between Clinton's email scandal to O'Malley's criminal justice platform, there will be lot to talk about, and they need to be able to push past their stump speeches to actually engage with the ways in which their fellow candidates are talking about the issues. The debate will also be an opportunity to hear from Webb and Chafee, who haven't been receiving the same national attention as the other three.