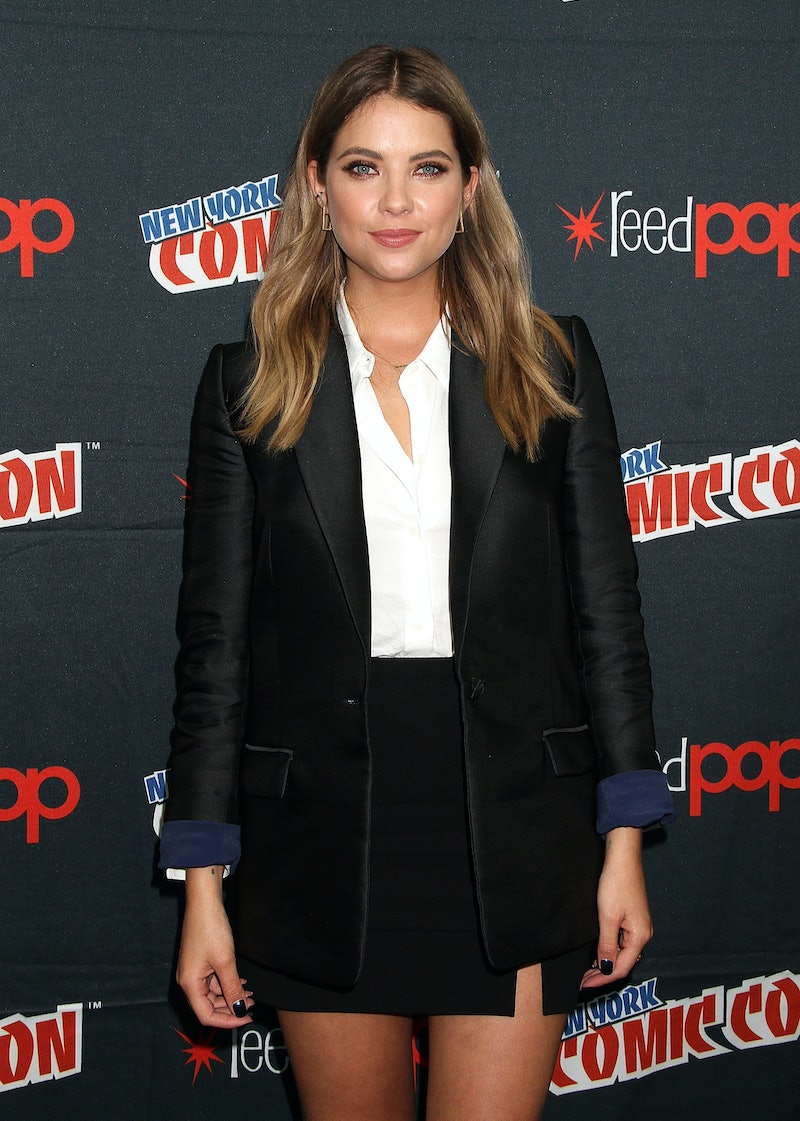 Over the weekend, New York City became the new Rosewood. And by that, I mean the Pretty Little Liars cast spent some quality time in the Big Apple. The ABC Family stars were there for the PLL panel at New York Comic-Con. Afterward, photos surfaced of Ashley Benson holding hands with Nat Wolff while exploring the city. Naturally these pictures spurred dating rumors, because anytime a female and male hang out, it can't be platonic, can it? Sarcasm aside, let's examine the evidence: Is Ashley Benson really dating the Paper Towns star?

While the snapshots are pretty adorable, I'd say it's too soon to jump to any conclusions. After all, this is the first time Benson and Wolff were spotted together, and they were only holding hands — a very friend-like gesture. Plus, Benson has a tendency to hang out with guys, and just because she spends time with members of the male population, it doesn't mean she's dating all of them. (Despite how much Haleb shippers wish she was with Tyler Blackburn IRL!)

Another thing to keep in mind? The PLL star is no stranger to romance rumors. Back in February, people wondered if Benson was engaged (she wasn't) just because she was sporting some new jewelry on her finger. So it's possible this new rumor is simply that — another rumor.

While there's no solid proof that they're dating, I can't stop thinking about how they potentially make a great match. Don't believe me? Here's a list of all the things Ashley Benson and Nat Wolff have in common.

1. They're Successful At What They Do

It's no secret that Pretty Little Liars and John Green movies are extremely popular. Benson and Wolff are no strangers to the spotlight, and they're both owning their careers right now.

2. They've Been In The Business For A While

These two have been acting since their childhoods. Benson got her start on Days of Our Lives and had a cameo in 13 Going on 30. Meanwhile, Wolff starred in the Nickelodeon series The Naked Brothers Band.

Like her character Hanna Marin, Ashley Benson has a unique but totally awesome sense of style. I'd say the same for Nat Wolff, who knows how to dress up on the red carpet. Plus, they're both apparently fans of wearing leather jackets. Blazers, too.

Nat Wolff makes music with his brother Alex. Based on Ashley Benson's Instagram, she has a tight bond with her sister, Shaylene.

5. They Hang With Jiff The Pomeranian

When scrolling through Instagram, this similarity surprised me. It turns out they both posed with Jiff, the Instagram-famous Pomeranian, on the same exact day. I'm unsure whether they actually hung out at the event, but they both clearly are dog people. Surely that's something to bond over.

Of course, none of this is proof that they're dating. But instead, it's evidence that, in the very least, they would make great friends. And if down the road they do decide to date, I'm all for it.

More like this
Jennifer Lopez & Ben Affleck’s Officiant Spilled The Tea On Their Wedding
By Sophie McEvoy
Pamela Anderson Is Still A Hopeless Romantic
By Ilana Kaplan
Reese Witherspoon Confirms This Fan Favorite Will Return For 'Legally Blonde 3'
By Jake Viswanath
Olivia Rodrigo Manifested Finally Meeting Demi Lovato
By Jake Viswanath
Get Even More From Bustle — Sign Up For The Newsletter
From hair trends to relationship advice, our daily newsletter has everything you need to sound like a person who’s on TikTok, even if you aren’t.