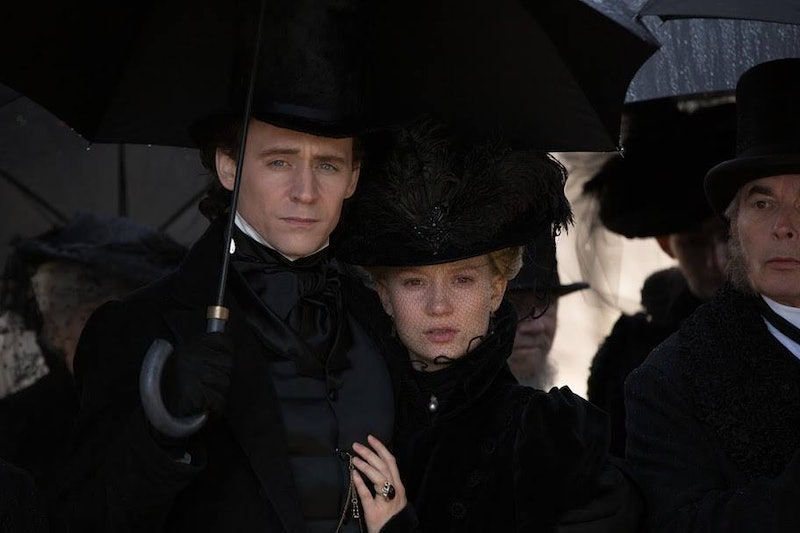 At a festival screening recently, Crimson Peak director Guillermo del Toro told an audience that the movie is a "gothic romance," not a horror film, according to io9. All due respect to Mr. del Toro, but the film's trailers and poster art alone have already made it difficult for me to turn the lights off at night, as I'm sure some long-fingered skeletal hand is going to grasp my shoulder like it does Mia Wasikowska's. I see the director's point, though; Crimson Peak leans on elements transferred from classic gothic novels like Jane Eyre and Wuthering Heights, from the rambling, mysterious house to the inscrutable, handsome leading man. If Crimson Peak were more decidedly a horror film, I'd guess that this movie might only be the first chapter, and that there might be a Crimson Peak sequel eventually. Del Toro's description, however, suggests a more self-contained story rather than the start of a franchise.

There's no official word from Universal Pictures or any of the creative team on the possibility of a Crimson Peak 2, which makes sense since the film hasn't opened yet and there's no support in the form of box office receipts. In an interview with Time, the director talked about his admiration of horror films with "ambiguous" resolution, not designed only to leave the door open for a sequel, but also to be more thoughtful and realistic. "I don’t want to spoil the movie," del Toro said. "But I think it’s a nice ending in Crimson Peak ."

If I had to guess the odds, I'd say it's 70/30 in favor of Crimson Peak being a standalone film. This, unfortunately, means that those two hours will be the only time I get to spend with Tom Hiddleston as Thomas Sharpe. Sad days. Here are four other horror movie heartthrobs who really should have gotten their sequel. (Spoilers below, so beware.)

Daniel Radcliffe In The Woman In Black

A sequel to this Victorian horror movie was released in 2014, with the horrifying subtitle "Angel Of Death." But Daniel Radcliffe's dapper character Arthur Kipps isn't a part of it, having been run down by a speeding train and all. Hard to come back from that.

Ryan Reynolds In The Amityville Horror

Ryan Reynolds' sweaty torso is the real star of this horror remake. Rumors persist that The Amityville Horror will get another reboot soon, since this culture can't get enough of possessed buildings and their unlucky inhabitants. But if it does happen, a new family will be moving in. Hopefully that dad works out too.

The schlocky, softcore sequel to this adaptation of an uber-violent Bret Easton Ellis novel gender-flipped the psycho character, casting Mila Kunis in the lead role. There's still slight hope for Christian Bale's well-groomed Patrick Bateman to pop up again on screen somewhere, since Ellis' novels exist in the same universe and Bateman is an ancillary character in several.

Jesse Williams In Cabin In The Woods

Cabin In The Woods arguably ended with the complete destruction of all humanity, which is a real shame, since Jesse Williams was both bookish and sexy as the "scholar" archetype, Holden. Anybody need a physics tutor?

Chances are, I'll just have have one movie to enjoy Tom Hiddleston's gothic adventures. But like these other guys, I'm sure he'll make that one movie worthwhile.