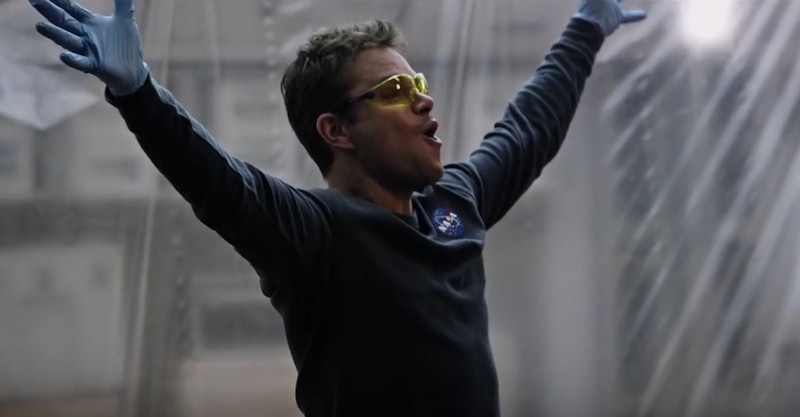 The Martian just enjoyed its second weekend sitting pretty at the top of the box office, proving that Matt Damon is a bankable movie star, even when playing a science nerd. In The Martian , Damon stars as Mark Watney, an astronaut and botanist who is stranded on Mars after being declared dead in a dust storm that nearly takes out his entire team. The stakes in the movie are familiar, and the character of Watney is not unlike Damon's famous Jason Bourne — a guy relying on his smarts and strength to make the difference between life and death. However, Damon's role as a genius astronaut is a far cry from Bourne, as many of the challenges presented to Watney are more intellectual, less physical. In The Martian, Damon has to sell himself as someone who not only has a wealth of scientific knowledge, but also the ability to turn that knowledge into survival. Basically, how Damon trained for The Martian had less to do with getting in shape, and more to do with preparing himself mentally.

Before he even stepped foot on The Martian set, the actor had a bit of an edge when it came to playing an astronaut on-screen. Last year, Damon had a secondary and surprising role in Christopher Nolan's Interstellar , playing an astronaut who, like Watney, found himself stranded on another planet in space.

Even so, The Martian required Damon to undergo astronaut training of a different kind, this one more psychological than physical. In fact, when Damon talks about the film, he gives the impression that his preparation was more focused on finding the right tone for his character than the right astronaut training.

"That was one of the big conversations that Ridley [Scott, the director] and I had in the very beginning — how do we retain all the humor and the fun from the book and keep the movie really entertaining, without losing the reality of the fix that this guy is in?" Damon said in an interview with Ars. "And how do we keep that tension and keep those stakes as high as possible? So that was really kind of the tonal dance of the movie and what we were really focused on."

Watney's isolation also appealed to Damon as an actor, and the idea of acting alone on-screen for the majority of the film was a major draw for the star to sign on to The Martian. "I loved it. It was one of the reasons to do the movie. I'd never been offered anything like that," Damon said in an interview with Newsweek. "It seemed like an interesting challenge. Acting is literally about the other person. It's always about what's going on and what are you getting from them. But to have nobody?"

The actor's focus on the character of Mark Watney, as opposed to on his profession, reflects the nature of the script adapted by Drew Goddard. Though The Martian has been praised as being scientifically accurate — or as close as possible for a Hollywood film about a theoretical space mission — Goddard told The Hollywood Reporter he tried not to get too caught up in scientific details.

"We felt that this movie was very much a love letter to NASA; we wanted it to be as accurate as possible. But the soul of what we were going after was more important," Goddard said.

Damon spoke about Goddard's intentions with the script during the TIFF press conference, where he revealed that Goddard's "love letter" to science (or NASA) was one of the main things that drew him to the script.

"Drew described this, the first time I met him, as a love letter to science, and we talked for about an hour... just about the incredible optimism and the uplift of the story, and I left there thinking like, 'Yeah, that would be something that would be wonderful to put out there into the world, and maybe it'll catch on,'" Damon said.

Damon may not have gone through astronaut training to play NASA star Mark Watney, but it's clear he hopes to inspire young moviegoers to follow in his character's footsteps.

More like this
Rihanna Shares Video Of 'Black Panther 2' Filmmakers' First Reaction To “Lift Me Up”
By Radhika Menon
Keke Palmer Shares The Sex Of Her & Darius Jackson's Baby
By Jake Viswanath
Austin Butler Confirms Vanessa Hudgens Pushed Him To Do 'Elvis'
By Alyssa Lapid
At 28, Rosie Perez Risked Her Career To Stop Playing Stereotypes
By Gabrielle Bondi
Get Even More From Bustle — Sign Up For The Newsletter
From hair trends to relationship advice, our daily newsletter has everything you need to sound like a person who’s on TikTok, even if you aren’t.