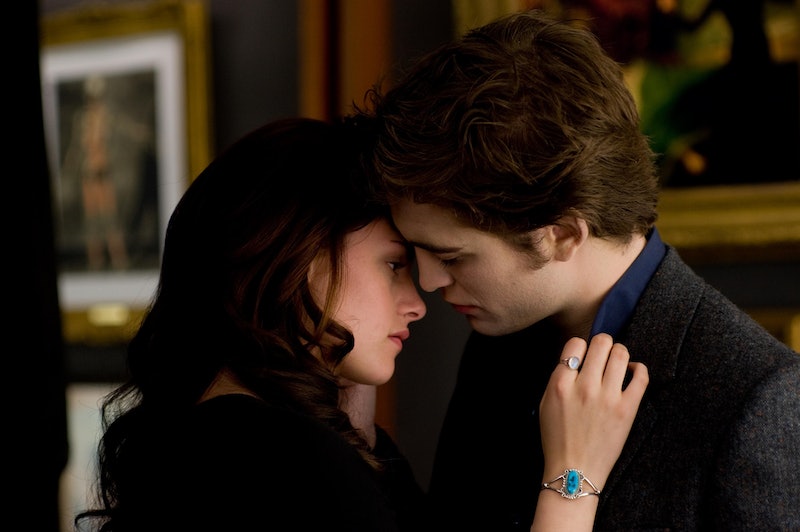 As you all have probably heard by now, Stephenie Meyer has released a gender-swapped Twilight novel in honor of the original book's tenth anniversary. It's a surprising move, one that excited many fans of the Twilight saga. However, to me what's even more interesting than Meyer's decision to remix her own work is the precedent this sets for other authors looking to do the same. And I am very excited about it.

According to Meyer, she decided to write her new novel, which is called Life and Death and stars Beau and Edyth instead of Bella and Edward, because of criticism that Twilight reinforced gender stereotypes and that Bella was a perpetual damsel in distress. So she re-imagined the characters, this time with her female lead as the powerful vampire and the male lead as the weak human. Which, if you ask me, is a much more interesting, creative, and productive way to respond to criticism than plenty of authors ever display.

Unfortunately, based on most of the reviews of the book, it seems that Life and Death only reproduces many of the gender stereotypes it seeks to tear down. That's disappointing, but it doesn't invalidate the value of attempting such a project. Honestly, the idea of authors publishing their own fan fiction, in any form is something I'd love to see more of.

The thing that makes fan fiction so fascinating is its ability to allow people to reimagine stories in innovative ways not often seen in traditional media. Gender-bending is a common technique in fan fiction, along with race-bending, and changing a character's sexuality (or at least making it more fluid). Good fan fiction (and I will freely admit there does exist a lot of subpar fan fiction) can be as sophisticated a critique of the social status quo as anything you've ever read.

And even if a story does none of those things, it can also just be interesting and fun to remix a story, to ask what would happen if events transpired differently, or if a story was set in a different time period, or if another character had been present, or any of another thousand possibilities.

Stephanie Meyer will probably not be writing any sequels to Life and Death — spoiler alert: the book ends with Beau becoming a vampire, a major departure from the original saga — but it still sets an interesting precedent, and I'd love to see more authors take up the project, if the impulse so strikes them. And I doubt I'm alone in thinking it would be really cool to have multiple versions of the same book that are all technically canon.

Obviously, not every author is interested in revisiting old projects or old worlds, even years after the fact, and that's perfectly fine. However, if authors did, it could majorly change the way we see fiction, one that paves the way for a more fluid, more creative, and more open literary world that could be incredibly cool.

I can also think of several books that I might be interested in reading in an updated, remixed form — though again, I'm not expecting any author to ever feel the need to reimagine their books just because fans would like it. Authors are the ones who get to decide what they write, and if they aren't interested in creating different versions of their books, they are under no obligation.

Still, here are 5 titles that I think could have really cool alternate versions, were their authors so inclined. Because as great as fan fiction is by readers is, imagine how neat it might be to see authors show us the road not taken?

The Harry Potter series was one of the first pieces of media to inspire widespread fan fiction writing, probably because its popularity coincided with the early days of the Internet, but its creator has also shown herself more than willing to keep updating the canon. J.K. Rowling continues to release trivia and even additional writing about the characters and the wizarding world on Twitter, in interviews, and via her website Pottermore — including some that imply she'd have written the series differently if she could go back.

So, what would it be like if Harry and Hermione really had gotten together — or if Dumbledore was openly gay, not revealed as such after the fact? If Rowling ever wanted to write something depicting that world — be it a rewritten scene, an alternate universe short story, or whatever else she comes up with — I would be 100 percent down for reading it.

An Abundance of Katherines by John Green

This novel is widely considered to be YA author John Green's weakest, though I still did enjoy it quite a bit. In fact, I think that the novel could be amazing, with a little gender bending. Instead of a male teenage prodigy with a string of ex-girlfriends all named Katherine and a budding identity crisis who goes on a road trip, what if Colin was actually Colleen? The exes could be Kurt — or stay as Katherine. Either way works.

Gillian Flynn's thriller is many things, among them an interesting exploration of the construction of female identity and the way women both create our own identities and have identities imposed on us by society. And I for one would love to see Flynn take on the same idea in a different context — give me Nick and Amy in the 1920s, or on a space colony hundreds of years in the future. Even knowing all the plot twists, with Flynn's sharp eye for character and detail, I would eat that up.

Ready Player One by Ernest Cline

Ernest Cline's novel Ready Player One was entertaining and fun, but it also managed to reproduce a lot of the problems as the video games it was based in. Although Cline tries towards the end to play around with ideas about race, gender, and sexuality, the story is still the classic "straight, white, male underdog saves the world" trope that video games seem inexplicably stuck on in perpetuity. I would love to see Cline reimagine the novel with a woman and/or person of color and/or LGBT person as the main character. In fact, in some ways it would fit right in with the video game-inspired premise: It's just one of the games where you can pick your protagonist, this time from a more diverse line up.

Yes, I know, Stephanie Meyer literally just did this, but like I said, her effort to break down gender stereotypes didn't go quite as she'd hoped. Still, it was a valiant effort, and I applaud the thought behind it. If she wanted to try again, instead of going for Beau and Edith, maybe she should instead try Bella and Edith. A lesbian version of Twilight honestly sounds like the most interesting thing I've heard of in a long time.

These are all merely ideas about what this phenomenon could like and the different forms it could take. I don't expect authors to feel the need to do this — but if there are any that are interested, I'd love to see them give it a whirl.